Every day, up to 60 specialists and large-capacity special equipment are involved in cutting blast furnaces for scrap metal at the Azovstal plant. 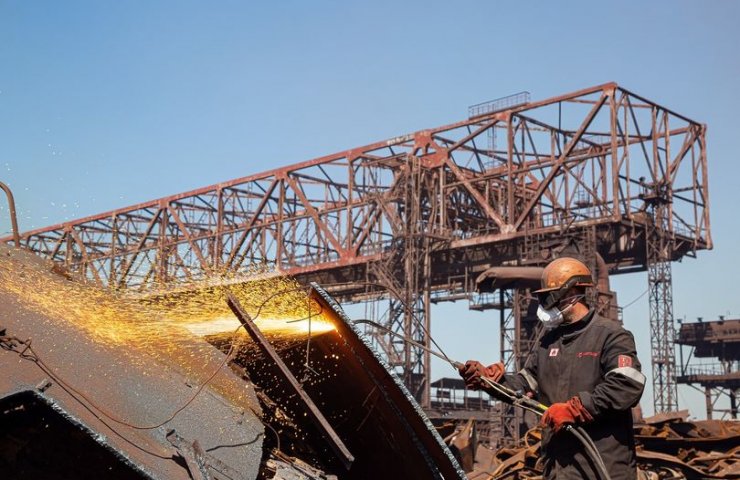 Azovstal continues to dismantle blast furnaces No. 5 and No. 6, which were shut down in early June 2019 as part of Metinvest's technological strategy, reported in the press service of the Mariupol branch of the Dutch mining and metallurgical company Metinvest BV Rinat Akhmetov and Vadim Novinsky.

More than 17.5 thousand tons of scrap metal and more than 79.3 thousand tons of construction waste have already been removed from the facilities, which is 75% of the total number of metal structures to be dismantled.

As specified in Metinvest, after dismantling the fifth blast furnace will be permanently decommissioned, and the sixth will be improved and will continue its work.

The specialists began active dismantling works in accordance with the developed technical measures in the middle of summer 2020. The term of the work is one year.

Dismantling is carried out in the "technological windows" when there is no movement of trains and there is an opportunity to block the existing railway routes for transporting liquid smelting products: pig iron to the converter shop and slag to the metallurgical slag processing shop.

Every day, up to 60 specialists and special equipment are involved in the work - from front loaders and hydraulic shears with an extended boom based on the KOMATSU tracked excavator to DOOSAN tracked excavators with removable attachments, GROOVE truck cranes with a lifting capacity of 100 to 220 tons, as well as dump trucks for transportation dismantled scrap metal and construction waste.

Previously it was reported that the load of the rail and structural shop of the Mariupol metallurgical plant "Azovstal" this year is unlikely to exceed 30% of its current capacity, while one of the key reasons for this decline is the loss of foreign markets.

Финансовая аналитика, прогнозы цен на сталь, железную руду, уголь и другие сырьевые товары. More news and analytics on Metallurgprom telegram channel - subscribe to get up-to-date market information and price forecasts faster than others.
Сomments
Add a comment
Сomments (0)
On this topic
Scrap metal collection in Ukraine for 5 months of 2021 increased by 35%
Metinvest has suspended the Italian companies
Metinvest, together with the Rinat Akhmetov and Vadim Novinskoy Foundations, donated 3,200 COVID-19
"Metinvest" has estimated the number of destroyed 10 years of facilities – emission
Azovstal will ship 60 tons of oxygen to Kiev hospital to fight coronavirus
Mariupol metallurgists continue environmental modernization despite the pandemic
Recommended:
Ukrainian court invalidated sale of Ferrexpo Plc shares in 2002
Steel market in Europe expects big production cuts due to weak demand
Islamabad receives $1.5 billion investment proposal for PSMC privatization
News Analytics
The production of passenger cars in Russia decreased by 2.8 times in eight29-09-2022, 11:19
Donetsk and Torez electrotechnical plants will start producing electrical29-09-2022, 11:37
Ukrainian coking plants reduced gross coke production by 55.2%29-09-2022, 11:28
China ramps up investment in transport to bolster economy29-09-2022, 11:33
The heads of mining companies named the main risks for business29-09-2022, 10:03
China production cuts in winter will give limited boost to steel markets -15-09-2022, 10:09
Steel prices may rise as manufacturers stop production11-09-2022, 14:06
IREPAS: The global long products market is in a "dramatic situation"10-09-2022, 20:49
Steel prices are unlikely to rise significantly in the near future - analysts02-09-2022, 22:58
Steel prices may move up on new data from China31-08-2022, 12:19
Sign in with: