Ukraine invites Italian business to cooperate in the energy sector

Italian business has long been represented in the Ukrainian metallurgical industry and mechanical engineering, now it is offered to enter into projects for gas transportation and oil refining. 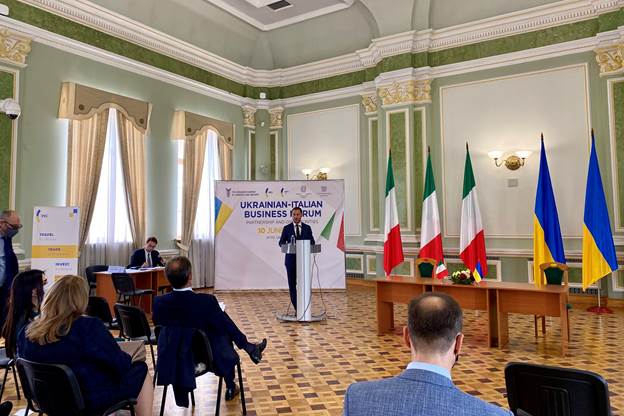 Gas exploration and transportation, oil refining, highly mobile generation and energy storage systems, hydrogen energy - all these are areas in which Italian business can fruitfully work together with Ukrainian partners. This was stated by Deputy Energy Minister for European Integration Yaroslav Demchenkov during his speech at the business forum "Ukraine - Italy: Partnership and Opportunities". The forum is being held within the framework of the official visit to Ukraine of the Minister of Foreign Affairs of the Republic of Italy, Luigi di Maio.

“We have a developed and extensive energy infrastructure, so I invite you to contact UkraineInvest and the Ministry of Energy and start a business in Ukraine,” said Yaroslav Demchenkov, addressing representatives of Italian companies.

Speaking to entrepreneurs and diplomats, the Deputy Minister briefly dwelled on the main advantages of Ukraine's energy sector and opportunities for development. Among them, Yaroslav Demchenkov highlighted the creation of new balancing capacities, which will contribute to the development of renewable energy.

“In a 10-year perspective, we need to create up to 2 GW of energy storage systems. Also, an urgent need for Ukraine is the creation of capacities for highly mobile generation - the need for them is also 2 GW, "he stressed.

Cooperation in the oil and gas industry may be interesting for large Italian companies.

“The most attractive for foreign partners are the areas of storage, processing and transportation of natural gas. Oil refining and trade in petroleum products are also interesting, ”the Deputy Minister said.

According to him, the strengths of Ukraine in such cooperation are the presence of one of the most powerful gas transmission systems in the world, which has an interconnector on the border with the EU countries, and the largest underground gas storage facilities in Europe.

Yaroslav Demchenkov separately drew the attention of entrepreneurs to the prospects of hydrogen as an energy carrier of the future. The development of hydrogen energy and, in particular, the production of "green" hydrogen, is one of the EU priorities.

“Now we are preparing a hydrogen strategy and studying the potential for the development of domestic hydrogen consumption through pilot projects in industry and transport infrastructure. In the future, such projects will be scalable. We are also exploring the possibilities and capacities of the Ukrainian gas transmission system to ensure the transportation of renewable hydrogen, ”said the Deputy Minister during a meeting with Ruggiero Corrias, Chief Executive Officer for Diplomatic Affairs and International Relations of the Italian company SNAM, the world's leading energy operator.

Given the significant potential and existing infrastructure, Ukraine seeks to become a full-fledged partner of the EU in the implementation of the European Hydrogen Strategy.

Yaroslav Demchenkov also met with the president of the Italian company ANIMA Marco Novicelli. ANIMA is a corporation that works in the field of mechanical engineering and engineering and is interested in cooperation with Ukrainian business and state-owned companies.

Previously it was reported that the mining and metallurgical holding Metinvest of Rinat Akhmetov and Vadim Novinsky signed a contract for the supply of equipment with the world's leading supplier of technologies for metallurgy, the Italian company Danieli. The total investment in the project for the construction of a new workshop for the production of cold-rolled steel, galvanized and painted coils at the Mariupol Metallurgical Plant named after Ilyich will exceed $ 1 billion.

Финансовая аналитика, прогнозы цен на сталь, железную руду, уголь и другие сырьевые товары. More news and analytics on Metallurgprom telegram channel - subscribe to get up-to-date market information and price forecasts faster than others.
Сomments
Add a comment
Сomments (0)
On this topic
Share of low-carbon energy in Ukraine reaches 70% - Deputy Minister
Stopped nuclear power plants and mines. What's going on in the energy sector of Ukraine?
DTEK, the first industrial energy storage system in Ukraine, has been certified by NEC Ukrenergo
European Commission: Ukraine should continue investing in renewable energy
Ukraine wants to buy liquefied natural gas from Turkey
Ukraine is a priority partner in the implementation of the European hydrogen strategy
Recommended:
Zaporizhstal has reduced the output of metal products by 56% since the beginning of the year
Employees of Ukrzaliznytsia mined crypto on service equipment
ThyssenKrupp invests 2 billion euros in the construction of Europe's largest DRI plant
News Analytics
Moody's changed the outlook for the global mining industry to26-09-2022, 19:04
Russia may increase taxation of oil, gas, coal and fertilizers26-09-2022, 15:58
UK steel production hits record low this year26-09-2022, 15:07
Ukrainian court invalidated sale of Ferrexpo Plc shares in 200222-09-2022, 12:45
EU Commission not doing enough to save aluminum industry - associations21-09-2022, 11:07
China production cuts in winter will give limited boost to steel markets -15-09-2022, 10:09
Steel prices may rise as manufacturers stop production11-09-2022, 14:06
IREPAS: The global long products market is in a "dramatic situation"10-09-2022, 20:49
Steel prices are unlikely to rise significantly in the near future - analysts02-09-2022, 22:58
Steel prices may move up on new data from China31-08-2022, 12:19
Sign in with: