Deputy Chairman of the State Energy Efficiency Yuriy Shafarenko spoke at the Ukrainian Gas Open Gas Forum and presented the potential and necessary steps to introduce the sphere of biomethane and hydrogen production in Ukraine. 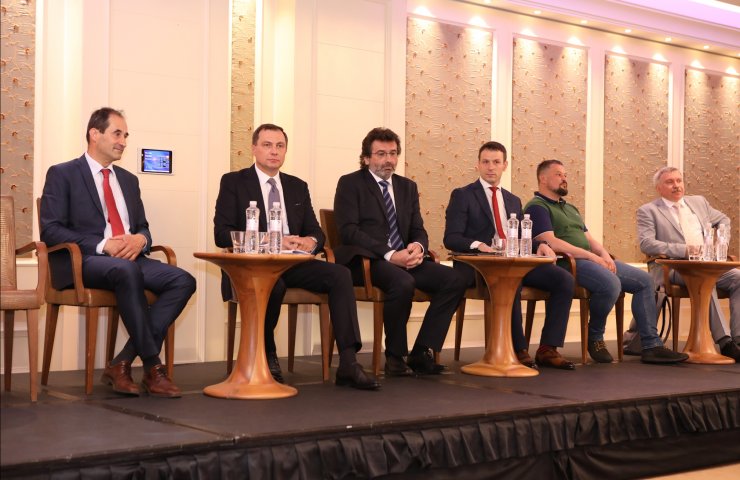 Biomethane and hydrogen can save the gas transportation system of Ukraine after the commissioning of Nord Stream 2, the country's State Energy Efficiency Agency said.

“So far, the gas transmission system is used only by 20%. The construction of Nord Stream 2 poses additional threats. After all, the lack of the necessary pressure in the network can deprive some consumers of the availability of gas. Biomethane and hydrogen can partially solve these issues, ”said Deputy Chairman of the State Energy Efficiency Yuriy Shafarenko speaking at the Ukrainian Gas Open forum.

Biomethane is purified biogas, which in terms of its physical and technical characteristics meets the standards for natural gas. That is, biomethane can already be used by the current gas transportation system of Ukraine. It is technically possible to connect biomethane plants to networks in almost all regions.

“The potential for biomethane production in Ukraine is 8 billion cubic meters per year. For comparison, this is about half of the annual gas imports and 25% of its total consumption per year, "Shafarenko explained.

Biomethane is a versatile fuel that can be used to generate electricity and heat, replace gas as fuel for cars, and also for export to the EU.

“In 2020, Ukraine paid $ 7.5 billion for the import of energy resources: oil, coal, natural gas. These are funds invested in other countries. They could stay in Ukraine and contribute to the development of capacities using those local types of fuel that could replace gas, preserve the gas transportation system and the country's economic situation. After all, each hryvnia invested in its own economy is returned by 3 hryvnia. These are jobs, replenishment of budgets, development of the economy, ”said the representative of the State Energy Efficiency Agency.

Biomethane production is actively developing in the EU, in particular, already in 17 countries. By the end of 2019, there were over 700 biomethane plants in Europe.

Therefore, the State Energy Efficiency, together with the Ministry of Energy and the Bioenergy Association of Ukraine, has developed a bill on the development of production and consumption of biomethane. This initiative was supported by the people's deputies. The relevant draft Law No. 5464 of 05/05/2021 was registered in the parliament (author - A. Zhupanin - People's Deputy of Ukraine, Chairman of the Subcommittee on the Gas, Gas Transportation Industry and Gas Supply Policy of the Verkhovna Rada Committee on Fuel and Energy Complex and Housing and Communal Services).

The goal is to create a legal framework for the development of the biomethane market in Ukraine, to establish the export of biomethane to the EU countries and to replace natural gas with biomethane in the production of electricity and heat.

Another promising area, the development of which will allow Ukraine to become a less energy dependent and worthy energy partner of the EU, is hydrogen. The potential for hydrogen production from renewable energy sources reaches 5.5 billion cubic meters per year by 2035. Now the Strategy for the development of hydrogen energy in Ukraine until 2050 is being developed.

“I am sure that the development of the sphere of biomethane and hydrogen will contribute to the economic development and energy independence of our country,” summed up Yuri Shafarenko.

Финансовая аналитика, прогнозы цен на сталь, железную руду, уголь и другие сырьевые товары. More news and analytics on Metallurgprom telegram channel - subscribe to get up-to-date market information and price forecasts faster than others.
Сomments
Add a comment
Сomments (0)
On this topic
Ukraine can fill its gas transportation system with biomethane - State Energy Efficiency
Ukraine may replace 25% of its natural gas demand with biomethane
Ukraine will be transferred to biogas and biofuel
Ukrainian and German companies agreed to cooperate in the field of "green" hydrogen
Is it possible to replace Russian gas in the Ukrainian GTS with "green" hydrogen?
Ukrainian hydrogen for Europe: an image of the future or a soap bubble?
Recommended:
Steelmakers are exploring the use of hydrogen for energy-intensive processes
Chinese scientists discover previously unknown mineral in lunar soil samples
European non-ferrous metal producers demand action on rising energy prices
News Analytics
EBRD downgrades Ukrainian economic growth forecast for 2023 from 25% to 8%28-09-2022, 13:57
EU plans additional sanctions against Russian metallurgy27-09-2022, 10:34
The European Commission has approved 5.2 billion euros of state support for27-09-2022, 10:43
China's leading industrial profits fall 2.1% in first 8 months27-09-2022, 10:20
Moody's changed the outlook for the global mining industry to26-09-2022, 19:04
China production cuts in winter will give limited boost to steel markets -15-09-2022, 10:09
Steel prices may rise as manufacturers stop production11-09-2022, 14:06
IREPAS: The global long products market is in a "dramatic situation"10-09-2022, 20:49
Steel prices are unlikely to rise significantly in the near future - analysts02-09-2022, 22:58
Steel prices may move up on new data from China31-08-2022, 12:19
Sign in with: