The profitability of purchases of scrap metal in Ukraine has decreased, but is still higher than the norm - UAVtormet

Metallurgical plants of Ukraine - consumers of scrap metal announced critically low stocks of scrap and threaten to stop steel smelting amid reports of scrap collectors about stocks in working days for 25 days, which is 2 times higher than the standard value. 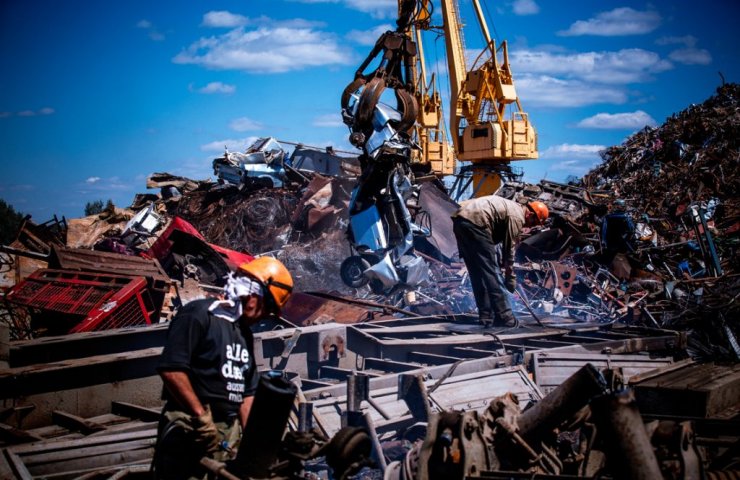 Last week (July 17-23) metallurgical enterprises of Ukraine left purchase prices at the level of 8,800 hryvnia per ton. This was reported by in the association UAVtormet with reference to the data of Ukrpromvneshexpertiza.

The association stressed that the profitability of scrap metal purchases, although it has decreased, is above the standard value.

The prices of scrap collecting companies for grade 3 scrap in the regions were at the level of UAH 7.11-7.16 thousand per ton. The upper border of the price range prevails in the southeastern regions of the country.

Remains of scrap in the warehouses of metallurgical plants increased to 224 thousand tons. Last week there were 203 thousand tons. Inventories in working days are 25 days, which is 2 times higher than the standard value. The highest stocks at Dneprospetsstal - 102 days. The lowest - at Elektrostal - 14 days.

UAVtormet predicts that scrap prices on the domestic market will be stable in the coming weeks - factories will evaluate the effect of the price cut.

Recall that consumers of scrap metal in Ukraine are actively raising the issue of the growing shortage of this raw material in the domestic market and are trying to pass through parliament a complete ban on the export of scrap metal from the country for at least the next three years.

Literally today, according to data publications by the Ministry of Industry, procurement director of the Mariupol plant "Azovstal" Boris Lyubich informed the officials that at the moment the warehouse stocks of scrap at the enterprise will be enough for no more than 2 days of work. Andrey Mishchenko, General Director of Metinvest-Resource LLC, said that since the summer he has not been able to provide metallurgists with scrap. According to him, we are mainly talking about the Mariupol site, which will force the Ilyich and Azovstal plants to cut production.

An even more critical situation has developed at the Interpipe Steel plant, where warehouses cannot compensate for the deficit of scrap, said Valentin Makarenko, Chairman of the Board of Interpipe Vtormet. According to him, everything is heading towards what could happen again in 2015, when the plant was idle for two months due to a shortage of scrap metal, and in 2016 - one and a half months.

Финансовая аналитика, прогнозы цен на сталь, железную руду, уголь и другие сырьевые товары. More news and analytics on Metallurgprom telegram channel - subscribe to get up-to-date market information and price forecasts faster than others.
Сomments
Add a comment
Сomments (0)
On this topic
Demand for scrap metal in Ukraine exceeds supply by 5%
Ukrpromvneshekspertiza predicts a decline in scrap prices in Ukraine this week
Purchase prices for scrap metal in Ukraine increased by almost 10% over the week
Procurement of scrap metal in Ukraine will decrease, and purchase prices will rise sharply -
European Union scrap collectors worried about possible export restrictions
Analysts expect a rise in the price of scrap in the Turkish market
Recommended:
US chip makers caught in crossfire of sanctions
China production cuts in winter will give limited boost to steel markets - Platts
In August, the truck market in Ukraine decreased by 62%
News Analytics
EBRD downgrades Ukrainian economic growth forecast for 2023 from 25% to 8%28-09-2022, 13:57
EU plans additional sanctions against Russian metallurgy27-09-2022, 10:34
The European Commission has approved 5.2 billion euros of state support for27-09-2022, 10:43
China's leading industrial profits fall 2.1% in first 8 months27-09-2022, 10:20
Moody's changed the outlook for the global mining industry to26-09-2022, 19:04
China production cuts in winter will give limited boost to steel markets -15-09-2022, 10:09
Steel prices may rise as manufacturers stop production11-09-2022, 14:06
IREPAS: The global long products market is in a "dramatic situation"10-09-2022, 20:49
Steel prices are unlikely to rise significantly in the near future - analysts02-09-2022, 22:58
Steel prices may move up on new data from China31-08-2022, 12:19
Sign in with: