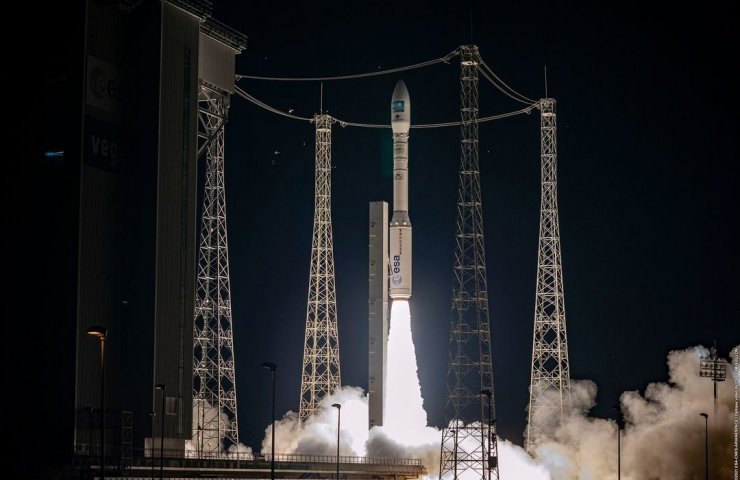 Today, August 17, at 4:47 am Kiev time, the Vega light-class launch vehicle was successfully launched from the Kourou cosmodrome in French Guiana.

As part of the VV19 mission, the Pleiades Neo 4 spacecraft weighing about 920 kg was launched by the launch vehicle. The satellite was launched by order of Airbus Defense and Space.

Also, within the framework of the European Space Agency program, four auxiliary payloads were launched into orbit: RADCUBE, SUNSTORM, LEDSAT and BRO-4 cubesat, ordered by the startup Unseenlabs.

Recall that the Ukrainian YUZHMASH has been participating in the creation of the Vega launch vehicle since 2004. For this project, YUZHMASH produces the RD-843 liquid-propellant rocket engine, which provides thrust and flight control for the fourth stage of the launch vehicle.

Since 2012, the Vega launch vehicle has been launched 19 times.

Финансовая аналитика, прогнозы цен на сталь, железную руду, уголь и другие сырьевые товары. More news and analytics on Metallurgprom telegram channel - subscribe to get up-to-date market information and price forecasts faster than others.
Сomments
Add a comment
Сomments (0)
On this topic
A launch vehicle with a Yuzhmash engine successfully launched from a cosmodrome in the Atlantic
Yuzhmash told whether it is possible to launch reusable rockets from the Black Sea
"Naftogaz" has filed a lawsuit against the government of Ukraine for the issuance of a
European space project will provide Ukrainian Yuzhmash with work for the coming years
Yuzhmashevsky engine successfully launched a French rocket into Earth orbit
Yuzhmash admitted that a Ukrainian engine could be the reason for the failure of the Vega rocket
Recommended:
Financial giant Goldman Sachs begins massive layoffs
China production cuts in winter will give limited boost to steel markets - Platts
The European Commission plans to create a European hydrogen bank with a budget of 3 billion euros
News Analytics
British Steel owner asks government for financial support05-10-2022, 13:05
The price of gold crossed the mark of 1700 dollars05-10-2022, 13:28
US coal prices top $20004-10-2022, 10:16
Tata Steel merger plan to secure long-term profits03-10-2022, 10:46
US hydrogen prices to drop to zero dollars per kg in 5 to 6 years: Platts02-10-2022, 21:53
China production cuts in winter will give limited boost to steel markets -15-09-2022, 10:09
Steel prices may rise as manufacturers stop production11-09-2022, 14:06
IREPAS: The global long products market is in a "dramatic situation"10-09-2022, 20:49
Steel prices are unlikely to rise significantly in the near future - analysts02-09-2022, 22:58
Steel prices may move up on new data from China31-08-2022, 12:19
Sign in with: