Ukraine has received new shunting capacities: the 4th hydroelectric unit of the Dnestrovskaya PSPP has been launched

After the launch of all the hydroelectric units provided for by the project, the Dnestrovskaya PSPP will become the largest hydroelectric power plant in Europe. 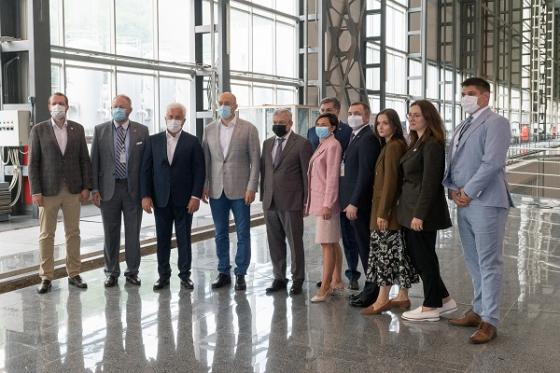 On the occasion of the Independence Day of Ukraine, at one of the most important infrastructure facilities of Ukraine - the Dniester PSP - hydroelectric unit No. 4 was launched in the generator mode. This event is of great importance for the United Energy System of the country, to which new shunting capacities have been added.

On August 17, as part of a working trip to the Chernivtsi region, Prime Minister of Ukraine Denis Shmygal visited the Dniester PSP and took part in the commissioning of hydroelectric unit No. 4.

General Director of Ukrhydroenergo Igor Sirota acquainted the Prime Minister with underground utilities, the upper reservoir of the Dniester PSP and the main control panel, where, in fact, the unit was launched. After the “Start” command, the service water supply pumps were started, the annular valve was lifted, and the guide vane was opened. The hydroelectric unit began to gain momentum, power was supplied to it. Synchronized and connected to the grid, the hydroelectric unit reached a nominal load of 324 MW, and the power of the station reached 1296 MW in generator mode and 1684 MW in pumping mode.

“According to the project, the station will consist of seven hydroelectric units with a total capacity of 2268 MW, which makes it the first in Europe and the sixth in the world. The cost of the construction project for Unit 4 alone is over 7 billion hryvnias. This is also an additional 324 MW of valuable balancing and maneuvering capacities, which are so necessary for our power system in the process of integration into the European ENTSO-E power system, ”the Prime Minister noted during the start-up operations.

It is important that the introduction of the hydroelectric unit into operation ensures a decrease in the number of start-ups of TPP units, in turn, will lead to coal and gas savings, and load stabilization.

“The fourth hydroelectric unit of the Dniester PSPP saves 300,000 tons of coal and gas by $ 60-70 million per year. We have been building this hydroelectric unit for four years and undertake to build 5,6,7 hydroelectric units in 6 and a half years. Today we have a new PSO model, where we will advance UAH 1 billion for the Guaranteed Buyer so that there is an acceptable tariff for the population. Next year PSO will go from 4 to 5 billion hryvnia annually. The main thing for us is the development of capacities, they will give us the opportunity to cover PSO and restrain the growth of tariffs, ”said Igor Sirota, General Director of Ukrhydroenergo.

Dnestrovskaya PSPP successfully plays the role of a reliable reserve to cover peak loads. The construction of a powerful pumped storage power plant on the Dniester, first of all, makes it possible to use surplus cheap nighttime electricity for pumping water in pumping mode at high elevations into the upper reservoir and activating it in a turbine mode during peak hours to generate electricity and allows to ensure the balanced operation of nuclear power plants.

The construction of the Dniester PSP is an integral part of the State Energy Strategy until 2035. According to the project, the station will consist of 7 hydroelectric units with a total capacity of 2268 MW in generator mode and 2947 MW in pumping mode, which makes it the first in Europe and sixth in the world. Completion of the construction of the station will have significant economic, environmental and social benefits.