Metinvest, in partnership with the Ministry of Culture, will create the first interactive laser-projection show in Ukraine in Khortitsa

Permanent laser projection show involves sound and visual design of historical images with their further projection onto the slopes of Unity Hill, the Dnieper rapids and the sky protruding from the island. 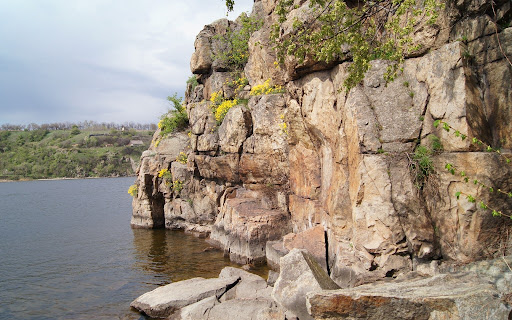 In Zaporozhye, a large-scale project for the revival of Khortitsa is being implemented as part of the presidential program "Big reconstruction". The project partners are Metinvest and Zaporizhstal - they supported the development of the concept according to which work is carried out on the island. Metinvest, together with the Ministry of Culture and Information Policy, initiated the creation of a dynamic light installation on Khortytsya - the first permanent laser-projection show in Ukraine on natural landscapes with the possibility of personal interaction with visitors.

“Khortytsya is a place of power for the Ukrainian people, unique in its sacred and historical significance. In partnership with the state and society, Metinvest supports the rebirth of Khortitsa, saturating it with new tourist magnets, making the island inclusive and preserving its historical heritage. One of the features of Khortitsa will be the country's only permanent laser projection show, which Metinvest together with the Ministry of Culture and Information Policy will present to the 30th Independence Day of Ukraine. The light installation for the guests of the island is a guide to the world of vivid historical images and national symbols that reveal Ukrainian identity, ”stressed the General Director of Zaporizhstal Oleksandr Mironenko.

Permanent laser projection show involves sound and visual design of historical images with their further projection onto the slopes of the Unity Hill, the Dnieper rapids and the sky protruding from the island. Taking into account the texture and features of each of the natural planes, technical solutions were selected to transmit the most accurate and readable image: 3D-mapping technologies, multimedia layout from nine high-power projectors to create a single large-scale image, projection by lasers onto thresholds over the Dnieper waters and light laser projections onto the sky over the island.

Unique technology and specially developed software allows each visitor to interact with the installation. At the Museum of the History of Zaporizhzhya Cossacks, light QR codes will be placed for downloading an application that allows visitors to launch light installations on their own. To do this, the application will offer options for a thematic light show about the symbols of Khortytsya, which, after being selected by the visitor, will be projected onto the sky, hill or rapids. In parallel, the guest's smartphone will display historical information about the projected symbol. Thus, the installation will fulfill not only an entertaining and aesthetic, but also an educational function.

At the moment, as part of the first stage of the reconstruction of the island's infrastructure, work has been completed on the arrangement of the Cossack circle, the improvement of the Unity Hill, on which the state flag of Ukraine will be raised on August 23, is being completed, restoration work on the roof of the Museum is in the active phase.

In 2021, the management company of Zaporizhstal, Metinvest, celebrates the 15th anniversary of its foundation. Metinvest is an international vertically integrated mining and metallurgical group of companies. The structure of the group includes mining and metallurgical enterprises in Ukraine, Europe and the USA, as well as a sales network in all key regions of the world. The company controls the entire production chain - from the extraction of ore and coal to the production of semi-finished products and finished products.

Финансовая аналитика, прогнозы цен на сталь, железную руду, уголь и другие сырьевые товары. More news and analytics on Metallurgprom telegram channel - subscribe to get up-to-date market information and price forecasts faster than others.
Сomments
Add a comment
Сomments (0)
On this topic
"Naftogaz" has filed a lawsuit against the government of Ukraine for the issuance of a
"Metinvest " with affiliated companies became the owner of 100% of "Zaporozhogneupor
Tata Steel joined the project of construction of European hyperloop
American tanks Abrams and BMP Bradley appeared on the border with Belarus
The European Commission intends to deepen economic integration with Ukraine
Ukraine showed the Chinese company the investment potential of "clean " energy
Recommended:
The price of gold crossed the mark of 1700 dollars
Battery output in China rose significantly in August
China ramps up investment in transport to bolster economy
News Analytics
British Steel owner asks government for financial support05-10-2022, 13:05
The price of gold crossed the mark of 1700 dollars05-10-2022, 13:28
US coal prices top $20004-10-2022, 10:16
Tata Steel merger plan to secure long-term profits03-10-2022, 10:46
US hydrogen prices to drop to zero dollars per kg in 5 to 6 years: Platts02-10-2022, 21:53
China production cuts in winter will give limited boost to steel markets -15-09-2022, 10:09
Steel prices may rise as manufacturers stop production11-09-2022, 14:06
IREPAS: The global long products market is in a "dramatic situation"10-09-2022, 20:49
Steel prices are unlikely to rise significantly in the near future - analysts02-09-2022, 22:58
Steel prices may move up on new data from China31-08-2022, 12:19
Sign in with: