It is planned to equip new multipurpose frigates with units produced by the Nikolaev Defense Plant, which will soon be built at the Indian shipyard. 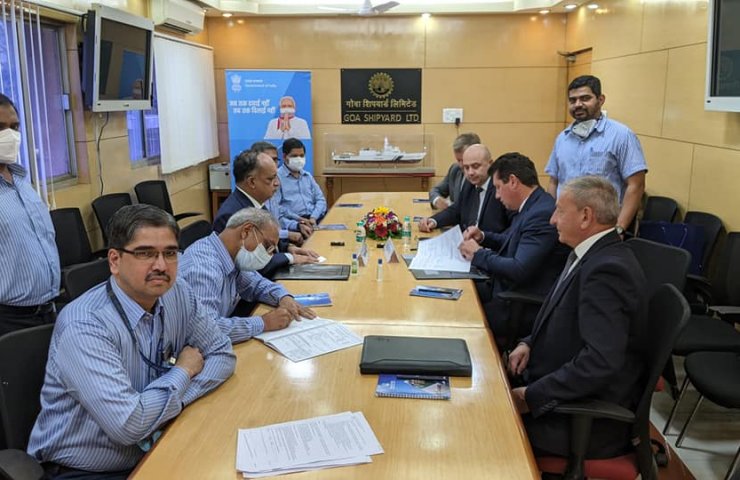 The state enterprise Zorya - Mashproekt, which is part of Ukroboronprom, signed a contract with the Indian company Goa Shipyard Limited for the supply of two modern gas turbine units М7Н2 for the needs of the Navy of this country.

They plan to equip new multipurpose frigates with Ukrainian engines, which will soon be built at an Indian shipyard. According to the agreement, the first unit should be ready in December next year, the second in July 2023.

The M7H2 units have an upgraded microprocessor control system, with a capacity of 58,000 horsepower and provide the ability to reach speeds of 30 knots.

It should be added that over the past two weeks, SE "Zorya - Mashproekt" has signed contracts with Indian customers for a total of about 100 million US dollars.

Финансовая аналитика, прогнозы цен на сталь, железную руду, уголь и другие сырьевые товары. More news and analytics on Metallurgprom telegram channel - subscribe to get up-to-date market information and price forecasts faster than others.
Сomments
Add a comment
Сomments (0)
On this topic
Prospects for ship repair in Ukraine
The operator of the Ukrainian gas transmission system will refuse from Russian spare parts and
At the Kherson shipyard SMG started cutting metal for the fourth tanker
Yuzhmash told whether it is possible to launch reusable rockets from the Black Sea
Smart Maritime Group, has launched the third tanker for Dutch VEKA Shipbuilding
Smart Maritime Group launched 4 tanker for the Dutch VEKA Group
Recommended:
Dnipro Metallurgical Plant confirmed the right to supply rolled metal products to Europe
British Steel seeks financial support from the government to continue work
China to promote green technology innovation with new plan
News Analytics
European steel price rise that began in January will be short-lived - MEPS26-01-2023, 14:44
Steel production in China rose in the first decade of January26-01-2023, 12:30
UK is ready to give 300 million pounds to save British Steel20-01-2023, 21:31
Carriage building plant in Kremenchug stopped production due to debts20-01-2023, 21:11
Europe's passenger car market records its worst year since the turn of the20-01-2023, 21:03
S&P: Russia will continue to dominate the steel export market in the Black05-01-2023, 11:22
Fitch Analysts Predict Big Drop in Global Steel Consumption This Year14-12-2022, 13:59
Analysts predict 5% annual growth in the iron casting market through 203006-12-2022, 12:44
Commodity prices will fall, metals quotes will rise slightly - Focus Economics28-11-2022, 13:28
Platinum market to face shortage next year - WPIC22-11-2022, 18:25
Sign in with: