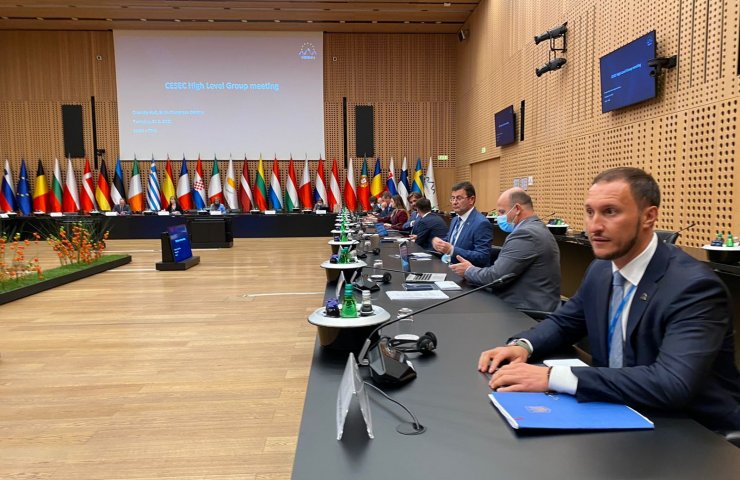 On September 21, in the city of Ljubljana (Slovenia), a meeting of the High-Level Group on the Development of Energy Networks in Central and South-Eastern Europe (CESEC) was held. The event took place within the framework of the Slovenian Presidency of the Council of the European Union. Ukraine was represented by Deputy Energy Minister for European Integration Yaroslav Demchenkov.

Opening the meeting, European Energy Commissioner Kadri Simson stressed that the European Union in July this year unveiled a broad plan to combat climate change and achieve carbon neutrality by 2050.

“The energy transition is an investment in the future of our economies,” said the European Commissioner. She called on the participating countries to propose joint projects of regional importance in the energy sector and assured the support of such projects from the EU.

During the meeting, representatives of the governments of the CESEC countries presented their vision of the electricity, natural gas and hydrogen markets.

“The climatic conditions of Ukraine determine the location of large wind energy facilities mainly on the Black Sea coast of the Zaporozhye and Kherson regions of Ukraine. Offshore wind farms, which can be located on the shelf of the Black Sea, can act as energy hubs, that is, to connect the energy systems of Ukraine, Romania, Bulgaria and Turkey, ”Yaroslav Demchenkov noted.

At the same time, an important argument in favor of Ukraine is that Ukrainian power generation is predominantly low-carbon.

“Carbon emissions in Ukraine are already significantly lower than the European average. As of today, almost 70% of the generation in Ukraine can be considered clean, ”Yaroslav Demchenkov emphasized.

The Deputy Minister also stressed the importance of cooperation between the countries of the region in hydrogen energy for Europe as a whole.

“The EU is considering the possibility of creating a unified gas infrastructure for transporting hydrogen within the Hydrogen Backbone project. Ukraine's joining this process will contribute to the development of hydrogen production and the implementation of a part of the European Hydrogen Strategy, where Ukraine is assigned a place as a partner in the supply of renewable hydrogen, ”the deputy minister said.

As part of the event, Yaroslav Demchenkov held bilateral meetings with representatives of the CESEC member countries, the European Commission and the leadership of the Energy Community Secretariat. During the meetings, the Deputy Minister paid special attention to the integration of the gas and energy markets of Ukraine with the EU and the CESEC countries.

The High-Level Group for Central and South-Eastern Europe energy connectivity (CESEC) is working to accelerate the integration of gas and electricity markets in Central and Southeast Europe. The Group's goal is to develop a common approach to the electricity and gas market, energy efficiency and the development of renewable energy sources, the selection of priority projects for building an interconnected regional electricity and gas market, as well as concrete actions to increase the share of renewable energy sources and investments in energy efficiency in the region.

Финансовая аналитика, прогнозы цен на сталь, железную руду, уголь и другие сырьевые товары. More news and analytics on Metallurgprom telegram channel - subscribe to get up-to-date market information and price forecasts faster than others.
Сomments
Add a comment
Сomments (0)
On this topic
Ukraine invites Italian business to cooperate in the energy sector
European Commission: Ukraine should continue investing in renewable energy
Ukraine is a priority partner in the implementation of the European hydrogen strategy
European Union will import hydrogen from Ukraine and Morocco
Ukraine wants to buy liquefied natural gas from Turkey
Ukrainian hydrogen for Europe: an image of the future or a soap bubble?
Recommended:
British Steel seeks financial support from the government to continue work
S&P: Russia will continue to dominate the steel export market in the Black Sea region
The Government of the Russian Federation extended the preferential import of equipment for the extraction of coal and ore
News Analytics
European steel price rise that began in January will be short-lived - MEPS26-01-2023, 14:44
Steel production in China rose in the first decade of January26-01-2023, 12:30
UK is ready to give 300 million pounds to save British Steel20-01-2023, 21:31
Carriage building plant in Kremenchug stopped production due to debts20-01-2023, 21:11
Europe's passenger car market records its worst year since the turn of the20-01-2023, 21:03
S&P: Russia will continue to dominate the steel export market in the Black05-01-2023, 11:22
Fitch Analysts Predict Big Drop in Global Steel Consumption This Year14-12-2022, 13:59
Analysts predict 5% annual growth in the iron casting market through 203006-12-2022, 12:44
Commodity prices will fall, metals quotes will rise slightly - Focus Economics28-11-2022, 13:28
Platinum market to face shortage next year - WPIC22-11-2022, 18:25
Sign in with: