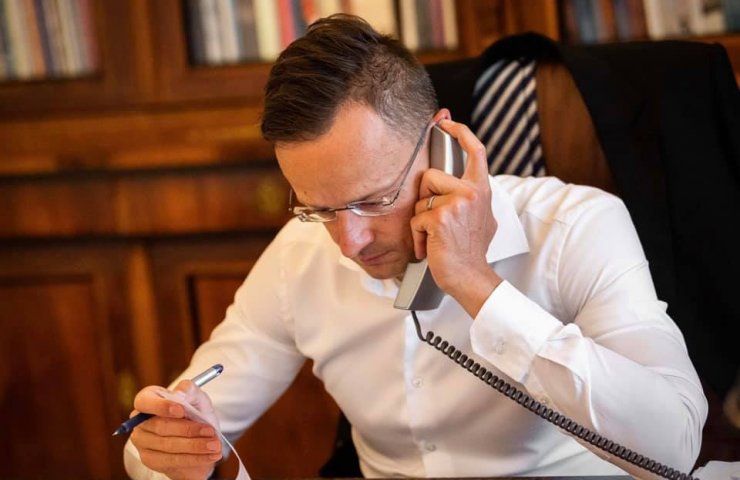 The Hungarian Foreign Minister summoned the Ukrainian ambassador on Tuesday because of Kiev's reaction to Budapest's agreement with Gazprom on long-term gas supplies.

Hungary's claims against Ukraine are based on the fact that according to Peter Siyjarto, was an attempt by Ukraine to block Hungary's new long-term gas supply agreement with Russia, which was signed on Monday.

Foreign Minister Peter Siyjarto said this was tantamount to "a violation of Hungary's sovereignty."

“We consider it a serious violation of our sovereignty and national security interests to want to interfere with the safe gas supply of our country, the heating of the houses of the Hungarian people and the work of industry,” Siyjarto said.

Hungary accused Ukraine of interfering in its internal affairs on Monday after Kiev criticized it for signing a new 15-year agreement on natural gas supplies with Russia's Gazprom.

Recall that, according to Ukrainian Foreign Minister Dmytro Kuleba, Hungary struck a blow at its relations with Ukraine by signing an agreement with Russia on gas supplies bypassing Ukraine, and promised an appropriate response to this step.

“This is a blow, and we will respond to it accordingly, because in this case there should be neither compassion nor sympathy,” Kuleba told the Freedom of Speech program on ICTV.

Финансовая аналитика, прогнозы цен на сталь, железную руду, уголь и другие сырьевые товары. More news and analytics on Metallurgprom telegram channel - subscribe to get up-to-date market information and price forecasts faster than others.
Сomments
Add a comment
Сomments (0)
On this topic
Ukrainian Foreign Ministry summoned the Hungarian Ambassador over an agreement with Gazprom
Hungarian minister called the ban on entry to Ukraine "pathetic and senseless "
The transit of Russian gas through Ukraine will continue on terms acceptable to all parties –
Ukraine signed a settlement agreement with Gazprom on $ 7.4 billion
France can block the sale of British Steel to the Chinese
Meta Company accused Facebook of trademark infringement
Recommended:
Energy efficiency investment worldwide tops $1 trillion in 2 years
The abolition of export duty in India may reduce the price of Turkish steel
Volvo starts deliveries of electric trucks made of fossil-free steel
News Analytics
Analysts predict 5% annual growth in the iron casting market through 203006-12-2022, 12:44
Oman to build a new steel plant worth $3 billion in 3 years06-12-2022, 12:14
Tesla's Shanghai gigafactory set a new record for electric vehicle shipments in05-12-2022, 15:24
Sanjeev Gupta may lose control of his steel plants in Belgium05-12-2022, 13:55
Steel demand and weather in Australia will affect coking coal prices05-12-2022, 13:16
Analysts predict 5% annual growth in the iron casting market through 203006-12-2022, 12:44
Commodity prices will fall, metals quotes will rise slightly - Focus Economics28-11-2022, 13:28
Platinum market to face shortage next year - WPIC22-11-2022, 18:25
Global steel demand falls and will fall by 2.3% in 2022: WorldSteel19-10-2022, 23:12
Iron ore prices fall to 11-month low15-10-2022, 10:36
Sign in with: