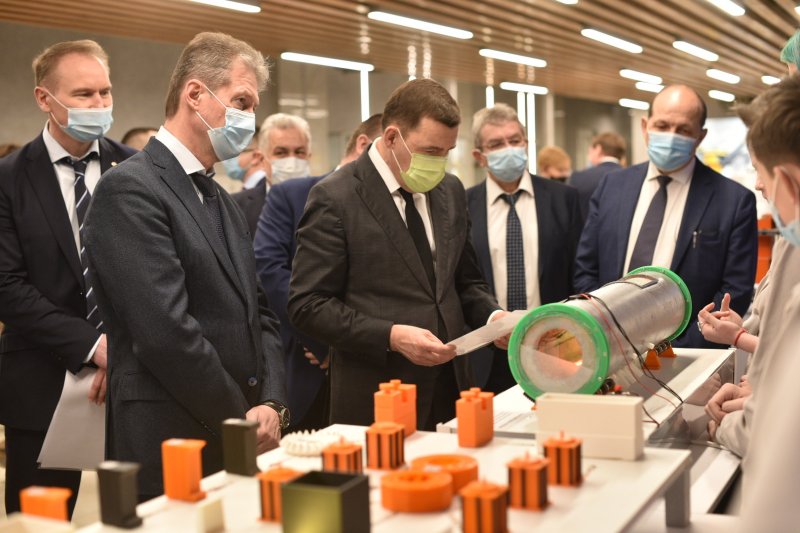 Today, the Palace of Technical Creativity (DTT) opened in Verkhnyaya Pyshma - an innovative educational space for the implementation of engineering ideas of children aged 7 to 17 years. The initiator of the creation of DTT was the Government of the Sverdlovsk Region. The solemn event was attended by the Governor of the Sverdlovsk Region Yevgeny Kuyvashev and the General Director of the UMMC Andrey Kozitsyn.

According to good tradition, the first robot-cat Kvanta, designed in the children's technopark Quantorium, was launched into the Palace of Technical Creativity. A detailed tour of the Palace was organized for the honored guests, as well as open lessons and master classes, where students demonstrated how to work with high-tech equipment.

“Today we are opening the modern Palace of Technical Creativity. This is a wonderful event and it is especially symbolic that it takes place in the Year of Science and Technology, - noted Evgeny Kuyvashev. - Everything in this Palace is intended for the development of creative thought, scientific research, new technological solutions. The largest in the region technopark "Quantorium", the "IT-cube" center, various laboratories, sections, clubs will operate here. In fact, all the necessary infrastructure has been created in Verkhnyaya Pyshma so that children and adolescents reveal their talents and abilities, achieve victories in research activities, learn to think and act creatively, unconventionally. ”

Andrey Kozitsyn congratulated the residents of Verkhnyaya Pyshma and the entire region on the opening of the DTT:“ I want to thank the governor, the regional government, the minister of education for the fact that several years ago, it was decided to build the Palace of Technical Creativity in Verkhnyaya Pyshma. This building, this palace, in which its creators have put their soul, will become a living organism that works for the entire Sverdlovsk region. This is the future of the guys who will find their place in the difficult 21st century. Good luck! ”.

Construction of diesel fuel in Verkhnyaya Pyshma was carried out from April 2018 to December 2020. The four-storey building with a total area of ​​more than 9.5 thousand square meters houses the largest children's technopark “Quantorium” in the Sverdlovsk region. It includes ten laboratories, three of them are unique for the region - these are Autoquantum (design of vehicle systems), Aerokvantum (design and piloting of unmanned aerial vehicles) and Nanoquantum (study of new materials and nanostructures). In autumn, the Palace is planning to open the Center for Digital Education "IT-cube". The building also houses a chess club, a coworking area, an assembly hall with 444 seats and a dining room.

A separate place in the building of the new DTT is occupied by the exposition of industrial technologies from UMMC, organized for vocational guidance of schoolchildren and studying the technological processes of the company's enterprises. It presents models of various industries: a mine and an industrial site of Gaysky GOK, an industrial site and a copper electrolysis workshop of Uralelectromed, an energy center of a greenhouse complex. Here you can also get acquainted with the models of a diesel locomotive and a loader and haul-off machine, which are produced by JSC Shadrinsky Avtoagregatny Zavod, ore samples and samples of the company's products, as well as the best projects of the participants in the UMMC Engineering competition. This year, the exposition is planned to be replenished with five more interactive models of mining and metallurgical production.

255 people can work in the Palace within one shift, and the annual load of the site assumes 3600 children. The organizers of the project expect that the DTT in Verkhnyaya Pyshma will become a popular scientific and technical platform uniting students and employers in the region.