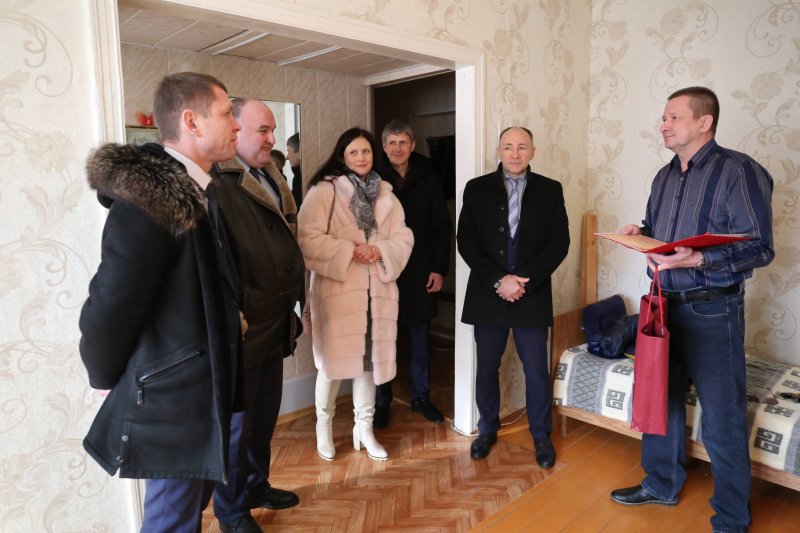 Mednogorsk MSC (an enterprise of the metallurgical complex of the UMMC) purchased an apartment for an anesthesiologist at the city hospital. Another charitable project of the team of metallurgists of MMSK fits into the long-term municipal program of support for local health care within the framework of an agreement on socio-economic partnership with the city administration.

- You give people the most valuable thing - health and longevity, so we sincerely wish victory I was always on your side with ill health so that Mednogorsk became your hometown, - said the head of the municipality Andrei Nizhegorodov at the solemn ceremony of handing over the keys to the apartment to Vladimir Mokeev, who came to work at the Mednogorsk city hospital at the invitation of the city administration.

- We adhere to a systematic approach to "social" investments, which provides for the strengthening of the material and technical base of the city hospital and the attraction of medical personnel with the provision of housing, - said the general director of MMSK Andrey Ibragimov.

So, in 2020, an ultrasonic phacoemulsifier was purchased for the surgical department worth 1.5 million rubles, thanks to which 250 residents of Mednogorsk and nearby villages have already undergone a course of eye surgery. We add that since 2015, the city-forming enterprise has allocated about 10.5 million rubles to the city hospital for the purchase of special equipment, transferred three apartments for medical workers. The most significant object is the overhaul of the polyclinic with the assistance of UMMC for 190 million rubles, which was completed in January 2019.

In addition to the Mednogorsk copper and sulfur plant, such enterprises operate in the Orenburg region The Ural Mining and Metallurgical Company, such as PJSC "Gaysky GOK", (Gai), specializing in the extraction of copper pyrite ore by underground and open methods and its processing at its own concentrating plant, LLC "Orenburg Radiator" (Orenburg), specializing in development, implementation and serial production of radiator products.

On this topic
MMSK became the winner of the All-Russian competition
In Mednogorsk, the construction of a new oxygen station was completed and a sports and recreation
A new oxygen station was launched in Mednogorsk and a fitness center was put into operation
The TMK Board of Directors recommends accepting the voluntary offer of the TMK subsidiary in
MMSC donated two units of municipal vehicles to the city economy
"UMMC-Builder" will give the city land for construction of social infrastructure in "the emerald
Добавить комментарий
Комментарии (0)
News Analytics
The capacity of the domestic steel market in Ukraine in January-March decreased19-04-2021, 10:33
In Russia, there is an exuberant demand for agricultural machinery19-04-2021, 10:24
Iran is satisfied with the reaction of the world community to 60% enrichment of18-04-2021, 13:24
Gas prices in Ukraine have reached a record value over the past two years -16-04-2021, 17:24
Ukrmetallurgprom asks the Antimonopoly Committee to allow Metinvest to bid for16-04-2021, 17:23
World Steel Association predicts a good year for metallurgists15-04-2021, 18:19
World Steel Association defines green steel and its variations12-04-2021, 13:14
China unlikely to cut steel capacity in 2021 due to high steel prices07-04-2021, 12:11
Scrap metal market at the beginning of April02-04-2021, 11:10
Rising Chinese Prices Fueled Rising Global Steel Prices - MEPS25-03-2021, 18:54
Sign in with: