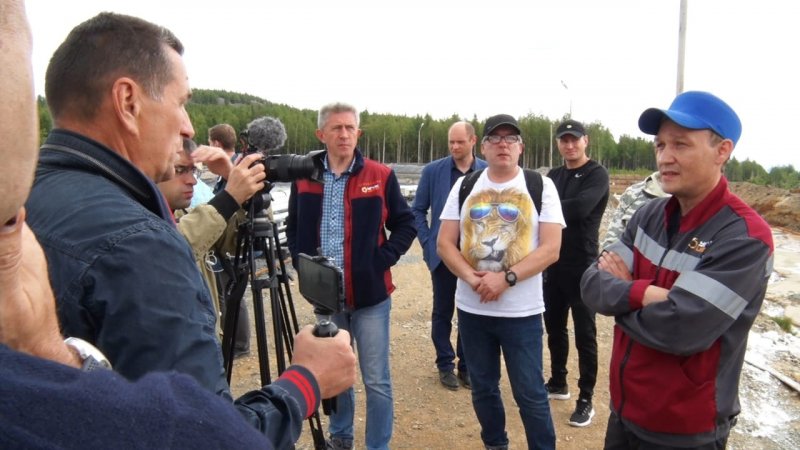 Representatives of public organizations assessed the scale of the environmental activities of Svyatogor JSC (enterprises of the metallurgical complex of UMMC) in the north of the Sverdlovsk region, having visited the Northern copper-zinc mine.

An off-site meeting of the group of social activists was held on June 22. It was attended by representatives of the Ural Mining and Metallurgical Company, Svyatogor JSC, the scientific community, deputies of the municipal and regional levels, public figures and specialists from the administrations of Ivdel and Severouralsk.

the deposit where the ore is currently being mined. Here, the specialists of the mine dwelt in detail not only on the performance indicators, but also explained in detail how and in what volumes the quarry waters are captured.

Further, the excursionists' path lay on the waste dumps of the Shemursky deposit. The mining of ore in this open pit was completed in 2016, and now the dumps and the open pit are being reclaimed here.

- Those present were able to see with their own eyes the scale of reclamation work, to get acquainted in detail with the progressive method of covering the dumps with bentonite mats. We have built a demonstration stand especially for this, - said Mikhail Tkachenko, director of the Svyatogor SMRC.

The next stop of the delegation is at the temporary treatment facilities of the Shemursky field, which were recently put into operation after reconstruction. At this facility, the participants of the field meeting were able to familiarize themselves with the technology of collecting and purifying quarry and dump waters. And then their path lay to the treatment facilities of the Novo-Shemursky field, where reconstruction is underway to increase productivity to 450 cubic meters per hour.

The next day, representatives of public organizations summed up the work at a meeting in Ivdel.

- I was attracted to a public group to understand the source of the problem and try to solve it together with the enterprise, - said Elena Tsygelnyuk, Associate Professor of the Department of Well Drilling at St. Petersburg Mining University, Candidate of Technical Sciences. - The amount of work that is planned and has already been completed is simply colossal. This is indeed the case. This is the first time I have seen dumps covered in this way. This is a rather time consuming and costly process. This is a lot of work. Rarely, when an enterprise agrees to bear such costs.

The implementation of the program of environmental protection measures in the north of the Sverdlovsk region is calculated until 2025.

- Its main provisions are reflected in the agreement concluded between Svyatogor JSC and the Government of the Sverdlovsk region, - said Dmitry Tropnikov, director of Svyatogor JSC. - The implementation of each of its stages is under strict control of both the Ministry of Natural Resources and the regional supervisory authorities.

UMMC intends to invest about 4 billion rubles in the implementation of the program.

Обозреватель рынка стали и цветных металлов. Пишу аналитические обзоры рынка для Металлургпром. More news and analytics on Metallurgprom telegram channel - subscribe to get up-to-date market information and price forecasts faster than others.
Сomments
Добавить комментарий
Комментарии (0)
On this topic
One of the best children's tennis tournaments in the country "UMMC-Open" has started in
GHH India and GHH Bumi Mining Service received the "Best Business Partner" award
Within our grasp: The new 45-ton mining dump truck from GHH Group is now in Russia
The superheaters of the boiler
All on the shoulder: New 45-ton mine dump truck from GHH Group now in Russia
The TMK Board of Directors recommends accepting the voluntary offer of the TMK subsidiary in
News Analytics
The production of passenger cars in Russia decreased by 2.8 times in eight29-09-2022, 11:19
Donetsk and Torez electrotechnical plants will start producing electrical29-09-2022, 11:37
Ukrainian coking plants reduced gross coke production by 55.2%29-09-2022, 11:28
China ramps up investment in transport to bolster economy29-09-2022, 11:33
The heads of mining companies named the main risks for business29-09-2022, 10:03
China production cuts in winter will give limited boost to steel markets -15-09-2022, 10:09
Steel prices may rise as manufacturers stop production11-09-2022, 14:06
IREPAS: The global long products market is in a "dramatic situation"10-09-2022, 20:49
Steel prices are unlikely to rise significantly in the near future - analysts02-09-2022, 22:58
Steel prices may move up on new data from China31-08-2022, 12:19
Sign in with: