According to participants of the market, goroncity roll in Southeast Asia costs $ 450 in the U.S. prices for the same products fell below $ 560 per ton. 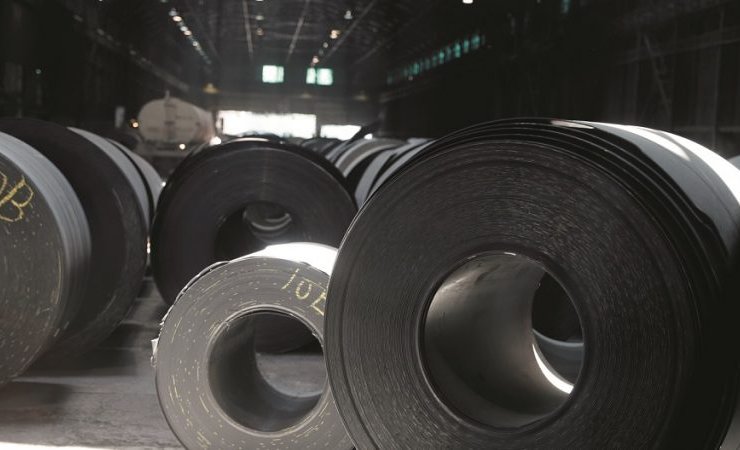 Global prices of hot rolled steel coil, used for the production of cars and mechanisms, fell to a three-year low because of the protracted Sino-us trade war and a slowdown in China's economic growth.

In the export markets of East Asia, such as Japan, South Korea, Taiwan and China steel coil made by the Japanese and other manufacturers in early November, fell to about $ 480 per ton, including expenses such as freight. This is about 7% less than the previous month. Compared to the highest level this year reached in the spring, the price dropped by 16%.

the Drop in prices of steel sheets reflects the slowdown in global car production and an uncertain Outlook for the industry. Hot rolled coils - steel sheets laminated at high temperature - are also widely used in household appliances and building materials.

Spring rates increased, but started to fall soon after it became apparent the economic slowdown in China, the world's largest consumer of hot-rolled steel. Subsequent short-term rises were not sustainable, and prices continued to decline.

price Drop again started to accelerate in early September, when the United States began a fourth round of punitive tariffs against China, which caused concern about a deeper economic downturn and weakening demand for steel products in the second largest economy in the world. 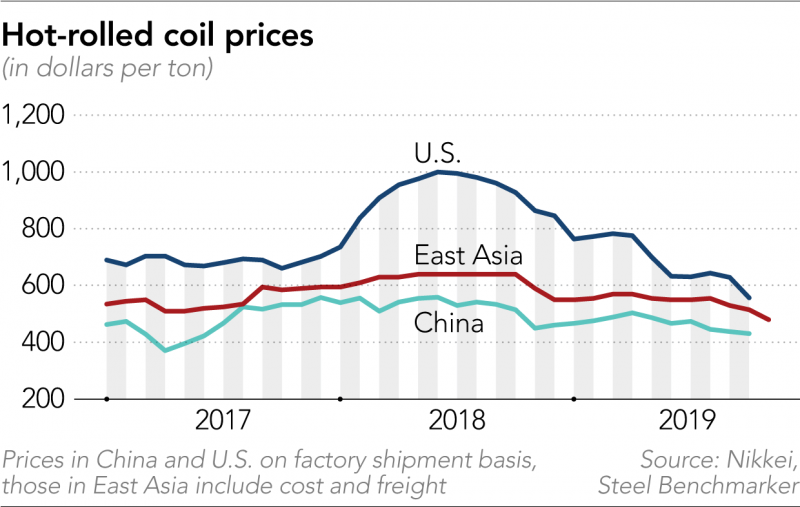 Production and other business activities in China generally slow down just before the October holidays, but resumed after. However, this year the demand for steel is not increased as much as expected.

In fact, the index of purchasing managers (PMI< / span>) fell below 50 points in October, falling for the sixth consecutive month according to the National Bureau of statistics of China. Sales of new cars fell in September, the 15th consecutive month.

Industry are also not helped the reduction of demand for steel in Europe and Turkey, which caused excess supply in Russia, Turkey and India. The extra metal is often sold with discounts in South-East Asia. As a result, prices received another blow. Some deals in Asia were negotiated below $ 450 per ton.

profit also becomes more and more difficult for producers who face high prices for iron ore. According to analysts, some Japanese steel companies are currently delaying the transaction in order to avoid losses.

a Similar story is happening in the United States. According to the American research company SteelBenchmarker prices for steel in early November are about $ 560 per ton, which is 10% lower than a year earlier, and for the first time in three years fell below $ 600.

in the Summer of 2018 prices rose to about $ 1,000 per ton due to the additional tariffs on steel imports imposed by President Donald trump. But they began to fall, as U.S. producers began to return to production stopped earlier power and created excess supply in the market.

Recommended:
"Smart-holding" Novinsky denies link with the Nikolaev shipbuilding plant
Dneprovsky iron and steel works announced the transition to the final stage of blowing of blast furnace No. 12
The UK is planning to increase the capacity of offshore wind energy 4 times
On this topic
Los Angeles Times: a Perfect storm in the American market of steel
Акции американских металлургов резко выросли
Азия сталкивается с наплывом китайской стали из-за действий Вашингтона
Цены на сталь в Индии упали до 19-месячного минимума
Торговый конфликт в Китае отражается на азиатском рынке нержавеющей стали
Обзор рынка алюминия в первом квартале 2019 года
Add a comment
Сomments (0)
News Analytics
The steel market has bottomed out, said Metinvest CEO20-01-2020, 18:23
Ukraine reported the first case of highly pathogenic avian influenza for three20-01-2020, 18:47
Uz and Chinese CRCC has signed a Memorandum of understanding20-01-2020, 16:03
Greece has sent to Ukraine two tankers with diesel fuel20-01-2020, 16:59
Zaporizhstal orders for the four months ahead – CEO20-01-2020, 15:57
Finnish scientists have learned to make food from water and air20-01-2020, 13:26
Iran has denied reports of sending black boxes of the crashed in Tehran Boeing19-01-2020, 13:57
The suspension of oil production in Libya has caused extreme concern to the UN.18-01-2020, 21:32
The IMF predicts the decline of the world economy into crisis since the great18-01-2020, 16:38
In the Balearic Islands in Spain were forbidden to get drunk and jump off18-01-2020, 13:28