The opening of traffic on the entire Beijing-Harbin High-Speed ​​Line means that high-speed rail links between the southern and northern regions of the country are fully operational. 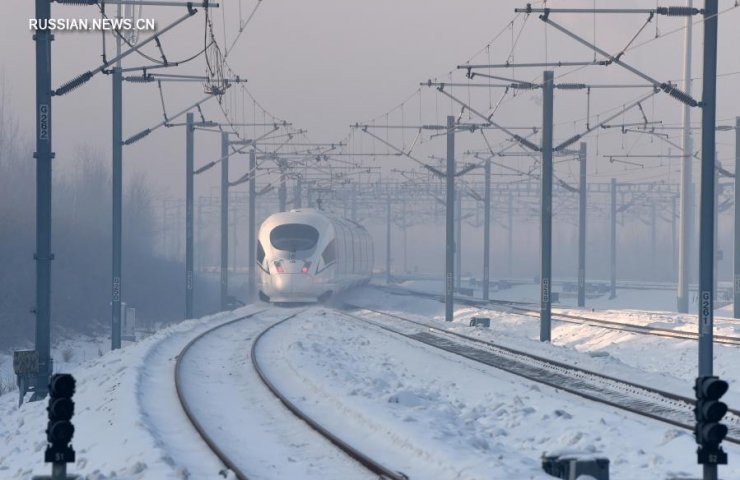 On the morning of January 22, a new section of the specified highway was opened with a length of 192 km. Taking into account the previously launched two sections, the total length of the new high-speed line is 1,198 km.

The new railway line provides a closer connection between the Chinese capital and the provinces of Liaoning, Jilin and Heilongjiang in northeastern China.

The new line, with a design speed of 350 kilometers per hour, is expected to reduce travel time from Beijing to Harbin to about 5 hours, more than an hour and a half faster than the fastest route previously.

Three sets of Fuxing bullet trains, capable of operating at temperatures up to minus 40 degrees Celsius, have been commissioned for the first time on the trains running on the Beijing-Harbin line.

The route is an important part of China's high-speed rail network. The opening of traffic on the entire Beijing-Harbin high-speed rail line means that high-speed rail links between the southern and northern regions of the country are fully operational, said Fan Yijiang, an expert from the State Committee for Development and Reforms of the PRC.

"This will facilitate travel between the northeastern region of the country and the Beijing-Tianjin-Hebei region, as well as add meaning to the areas along the routes," Fan Yijiang said.

According to the China State Railway Group, as of the end of 2020, the total length of operational roads within the Chinese railway network was 146.3 thousand km, including 37.9 thousand km of high-speed railways. </p >

Recommended:
TC Energy may sell all steel and equipment purchased for Keystone XL
Novolipetsk Iron and Steel Works filed a lawsuit against the U.S. Steel worth $ 100 million
Brent crude price rises above $ 60 per barrel for the first time since January last year
On this topic
Sriwijaya Air SJY 182 from Jakarta to Pontianak disappears from radar immediately after takeoff
China will need another 7,576 new passenger aircraft over the next 20 years
China has created a freight train with speeds up to 350 km /h
For the first time, electric transport has become more cost-effective than with internal combustion
Shanghai relocates 5-story school building with a "walking machine" (Video)
Indian iron ore sales to China plummet
Add a comment
Сomments (0)
News Analytics
Georgia's economy shrinks by 11.5% in January26-02-2021, 21:21
Ukraine retained its position in the world ranking of steel producers and rose26-02-2021, 15:52
ArcelorMittal has raised prices for galvanizing for the European market to 90026-02-2021, 13:23
The European Commission initiated a new investigation on steel imports to26-02-2021, 13:22
A rally of workers of the stopped shipyard was held in Mariupol26-02-2021, 12:34
Increase in prices is forecasted in the markets of steel raw materials -26-02-2021, 09:25
Troy ounce of gold will drop $ 500 in two years - Fitch25-02-2021, 18:29
Global iron ore production growth to outstrip cumulative production in India23-02-2021, 10:22
Fitch Ratings Warns of “Shocking Impact” on Fossil Fuel Exporters18-02-2021, 14:44
Raw material prices rise by about 10.5% in January 2021 - Deutsche Industriebank12-02-2021, 10:48
Sign in with: