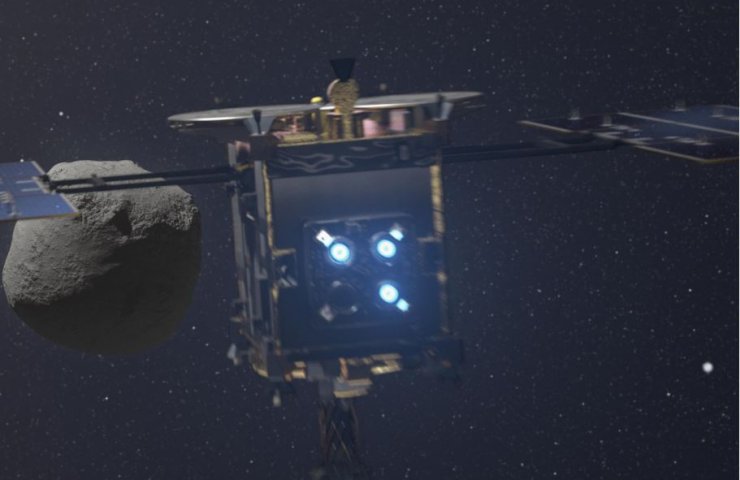 A capsule with soil samples taken by the Japanese space probe Hayabusa-2 from the surface of the asteroid Ryugu landed on the territory of the restricted area of ​​Woomera in southern Australia.

"Today, as a result of a helicopter search, we found a capsule in the area of ​​the planned landing!", - reported on the mission's Twitter.

Asteroid 162173 (Ryugu) is located three hundred million kilometers from Earth. This is a near-Earth asteroid of the most common type C - they are believed to contain elements of the still primitive state of the solar system, the protosolar nebula. These elements are protected from the effects of solar radiation and other factors, and therefore have important scientific value.

In March last year, Science magazine reported that the device had found minerals in samples from an asteroid that contain oxygen and hydrogen atoms combined into a single group. As a result of the mission, scientists hope to find traces of water or organic matter, which can answer the question of the spread of life in the Universe.

Recommended:
Fitch Ratings Warns of “Shocking Impact” on Fossil Fuel Exporters
Brent crude price rises above $ 60 per barrel for the first time since January last year
EU enacted “enforcement of trade regulation” to circumvent WTO rules
On this topic
How Tesla became the world's most valuable automaker
NASA Accelerates Mission to $ 10,000 Quadrillion Metal Asteroid
Yuzhmash told whether it is possible to launch reusable rockets from the Black Sea
UN Secretary General: humanity has a chance to cope with global warming
Driving piles in Moscow and the region
Top 10 digital trends in the global steel industry
Add a comment
Сomments (0)
News Analytics
Ministry of Commerce: China intends to strengthen trade and economic ties with24-02-2021, 18:49
Vostochny GOK in 2020 increased the production of uranium concentrate by 7%24-02-2021, 18:58
For the first time in Ukraine, recirculators and irradiators for air24-02-2021, 18:37
Novokramatorsk Machine-Building Plant keeps sales and production at the level24-02-2021, 17:53
The English court rejected the claims of the Russian "Tatneft" against24-02-2021, 17:42
Global iron ore production growth to outstrip cumulative production in India23-02-2021, 10:22
Fitch Ratings Warns of “Shocking Impact” on Fossil Fuel Exporters18-02-2021, 14:44
Raw material prices rise by about 10.5% in January 2021 - Deutsche Industriebank12-02-2021, 10:48
JP Morgan Analysts Announce New Super Growth Cycle in Commodities11-02-2021, 17:56
S&P Global Platts predicts first drop in domestic steel demand in China in 510-02-2021, 12:26
Sign in with: