Mass protests in the center of Sarajevo received the support of citizens of the entire Bosnian Federation. Water and food have been brought to the protesters, and the number of people in the square in front of the government building continues to increase. 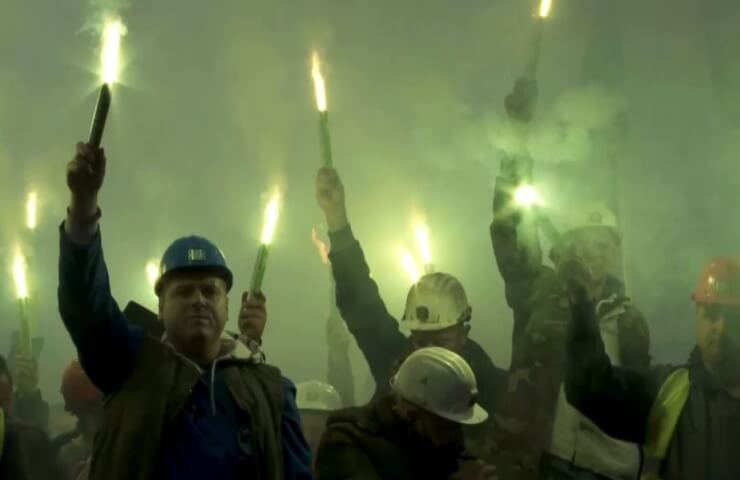 On Wednesday, about 7,000 miners stopped work at seven coal mines in Bosnia and Herzegovina and spoke in front of the government headquarters in the capital, demanding better working conditions and higher wages.

Miners brought to Sarajevo from all over Bosnia buzzed into chimneys, lit torches, waved flags and shouted slogans such as "get out" and "thieves", accusing the government of violating wage rules.

The union said the miners will continue to protest until their demands are met.

The government of the Federation of Bosnia and Herzegovina plans to restructure debt-backed coal mines as part of a gradual coal-to-renewable energy transition program and reduce the number of employees to 5,200.

However, this week, Elektroprivreda BiH, which includes all of the country's coal mines, announced a reduction in the minimum wage to 570 Bosnian marks (about 300 euros).

The miners are demanding a minimum wage of 1,000 Bosnian marks, as well as the dismissal of the mine managers and the head of Elektroprivreda BiH.

Minister of Energy, Mines and Industry Nermin Dzindich tried to address the miners in front of the government building around noon, but the miners did not allow him to do so and booed him when he came accompanied by armed officers of the special police of the Ministry of Internal Affairs.

Dzindic's actions provoked further uprisings throughout the Bosnian Federation, and after that the citizens of Sarajevo spontaneously began to come and bring food and drinks to the protesting miners.

Prime Minister of the Bosnian Federation Fadil Novalic, who was on a trip abroad, urgently returned to Sarajevo due to protests.

The abandonment of coal by 2050 and the transition to renewable energy sources is one of the conditions for the country's accession to the EU, in connection with which the authorities plan to restructure coal mining enterprises, which will lead to job cuts. Today, 75% of electricity in Bosnia and Herzegovina is generated by thermal power plants.