Through the use of composite materials, the su-57 is durable and lightweight airframe, in conjunction with the other characteristics provides the aircraft with excellent maneuverability. 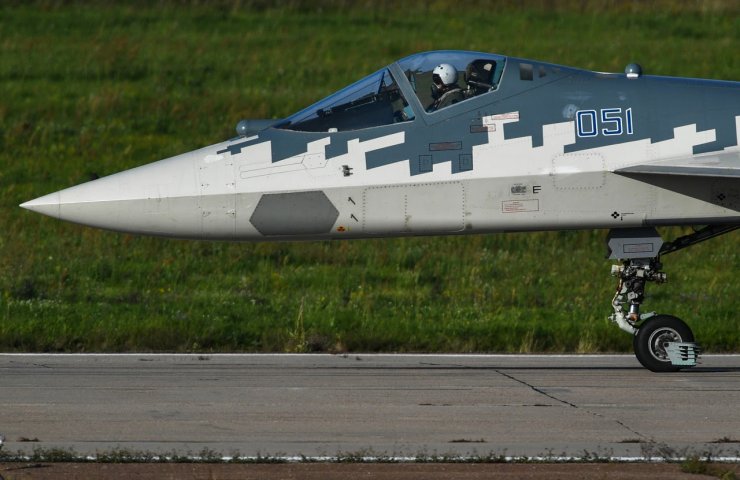 rostec starts production of parts and aggregates of polymeric composite materials for serial production of fifth generation fighter, the su-57. The contract, first in the production of the cooperation on the production su-57, signed Obninsk research and production enterprise "Technology" to them. A. G. Romashin of state Corporation rostec and the company "Sukhoi".

Just in the period from 2020 to 2028 of the company's branch in Komsomolsk-on-Amur will be supplied 74 sets of composite products. Through the use of composite materials, the su-57 is durable and lightweight airframe, in conjunction with the other characteristics provides the aircraft with excellent maneuverability. In addition, the use of composites makes the equipment invisible to radar.

"the fifth generation Fighter, the su-57 has implemented the most advanced developments of Russian scientists and engineers. Signed the contract on creation of composite parts and assemblies become the first in the framework of the cooperation on the production of the serial su-57. The company, the Corporation fully prepared to ensure the implementation of the tasks. For this we have the necessary experience, facilities and specialists," – said the Executive Director of Rostec Oleg Yevtushenko.

su-57 (promising aviation complex tactical aircraft PAK FA, T-50) is a Russian multipurpose fighter of the fifth generation developed by the Sukhoi design Bureau. It is designed for a wide range of combat missions during operations in air, ground and sea targets.

the First flight of the PAK FA held on 29 January 2010 in Komsomolsk-on-Amur. The General public, the aircraft was first demonstrated at MAKS-2019.

Recommended:
Converter # 3 was overhauled at the Mariupol plant named after Ilyich
Global Chip Shortage: Tesla May Start Its Own Chip Manufacturing
Electrotyazhmash and Ukrzaliznytsya outlined plans for further cooperation
On this topic
Russian military exports not affected by the sanctions - Rostec CEO
Lattice rudders Falcon 9 and Falcon Heavy will be made of stainless steel
Nissan builds robots to make parts for discontinued cars
Posco prepares for the green car era
Rostec has created a fog light for the "city of the future"
New Russian steel for oil pipelines prevents leaks
Add a comment
Сomments (0)
News Analytics
Demand for scrap metal in Ukraine exceeds supply by 5%19-06-2021, 11:45
Ukraine resumed sea purchases of gasoline due to restrictions on supplies from19-06-2021, 11:38
Installation of the first mine hoisting machine of Uralmashzavod began in Altai19-06-2021, 11:46
European designers have learned to inflate steel structures that could be a18-06-2021, 17:42
In Ukraine, police were accused of involvement in the theft of coal from trains18-06-2021, 17:51
Vaccinations fuel demand for platinum - World Platinum Investment Council08-06-2021, 12:55
Sharp price growth continues in the rolled metal market - Ukrpromvneshexpertiza08-06-2021, 11:04
Analysts note overheating of the global scrap metal market01-06-2021, 13:28
Hydrogen-fueled steelmaking could be competitive after 2050 - McKinsey19-05-2021, 14:22
Steel raw material prices are skyrocketing across the board18-05-2021, 12:34
Sign in with: