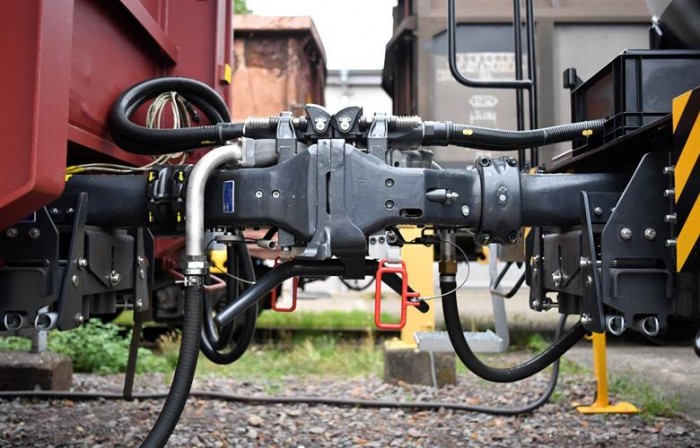 Uralvagonzavod (part of the Concern UVZ is a part of the State Corporation Rostec) began manufacturing a stand for spatial life tests for parts of carriage building. It was designed by the company's specialists and is unique: there are no analogues developed in Russia for such a stand.

The loading of the tested parts on the stand, the frame height of which is 7 meters, can be carried out simultaneously in three mutually perpendicular directions: vertical and two horizontal in accordance with the new GOST. This completely simulates the location of a part, for example, a bolster beam or a side frame, in the car bogie structure, the payload on them, the force when the car is moving and cornering. In this case, the vertical loader operates with an effort of up to 140 ton-forces and a vibration frequency of up to 20 times per second. The horizontal load reaches 16 ton-forces with the same frequency of application. A special mechanism allows you to damp large vibrations, reduce the dynamic load on the foundation. An energy saving system is also provided.

Now in the shop of non-standardized equipment and means of mechanization No. 1, the manufacture of the frame, columns and other components of the future stand is being completed. To design a powerful foundation, the Tagiltransmashproekt institute, a subdivision of UVZ, was involved in the project. The construction and energy complex project is being implemented by specialists from the capital construction department, the repair and construction department and the department of the chief mechanic. The equipment installation will be carried out by the workers of the technological equipment repair shop. The stand will be operated by specialists from the Materials Research and Testing Center of Uralvagonzavod.

The lead developer of the stand is Nikita Soroka, head of the serial production equipment department of the design bureau for mechanization and production automation of Uralvagonzavod. This design bureau is engaged in the development of various non-standardized control, technological and test equipment required for the production of cars and special equipment. Soroka is a laureate of a scholarship from the President of the Russian Federation. During his work in the design bureau since 2014, he participated in the development of several large projects, such as a stand for testing and running-in a traction winch for special equipment, a car body tilter, a stand for checking and setting up a traction winch shutdown mechanism. With the project of the stand for spatial endurance tests, the specialist became the winner of the corporate competition "Innovative Idea", in which representatives of 13 enterprises of the integrated structure of UVZ took part.

“Uralvagonzavod always keeps up with the times, ensuring the development and implementation of modern technologies, modernization of production, launching new products on the market, improving the quality of our products. I am glad that our company employs talented designers - creative, ambitious, with out-of-the-box thinking, capable of performing the most difficult tasks. The management of the enterprise, in turn, gives them the opportunity to implement the most daring and promising ideas ", - said Yaroslav Rydlevsky, Deputy Chief Engineer of Uralvagonzavod for Car Building.

Финансовая аналитика, прогнозы цен на сталь, железную руду, уголь и другие сырьевые товары. More news and analytics on Metallurgprom telegram channel - subscribe to get up-to-date market information and price forecasts faster than others.
Сomments
Add a comment
Сomments (0)
On this topic
Uralvagonzavod will change the assortment due to overproduction of open wagons
Uralvagonzavod implement a system to protect the cars from fraud
Uralvagonzavod signed a contract for 3 thousand gondola cars
Uralvagonzavod introduces high-tech laser and plasma cutting equipment into production
Uralvagonzavod presented the first refrigerated car in Russia
Uralvagonzavod began to produce a covered wagon with sliding doors
Recommended:
India plans measures to stimulate domestic steel exports
Zaporizhstal summed up the results of production in October 2022
Mining enterprises of Ukraine reduced the export of iron ore by 38.9%
News Analytics
China's iron ore output to rise in 2023 as new projects are launched30-11-2022, 18:10
"Centravis" agreed to supply a new batch of seamless pipes to a30-11-2022, 16:51
Metinvest enterprises in Ukraine resumed work after massive shelling of29-11-2022, 11:59
The European Council added the violation of restrictive measures (sanctions) to28-11-2022, 14:22
The abolition of export duty in India may reduce the price of Turkish steel28-11-2022, 14:07
Commodity prices will fall, metals quotes will rise slightly - Focus Economics28-11-2022, 13:28
Platinum market to face shortage next year - WPIC22-11-2022, 18:25
Global steel demand falls and will fall by 2.3% in 2022: WorldSteel19-10-2022, 23:12
Iron ore prices fall to 11-month low15-10-2022, 10:36
China production cuts in winter will give limited boost to steel markets -15-09-2022, 10:09
Sign in with: