The Ukrainian-Canadian project is based on time-tested technical and design solutions, which will make it possible to bring a new competitive medium-class launch vehicle Cyclone-4M to the launch services market as quickly as possible with a high level of quality and reliability. 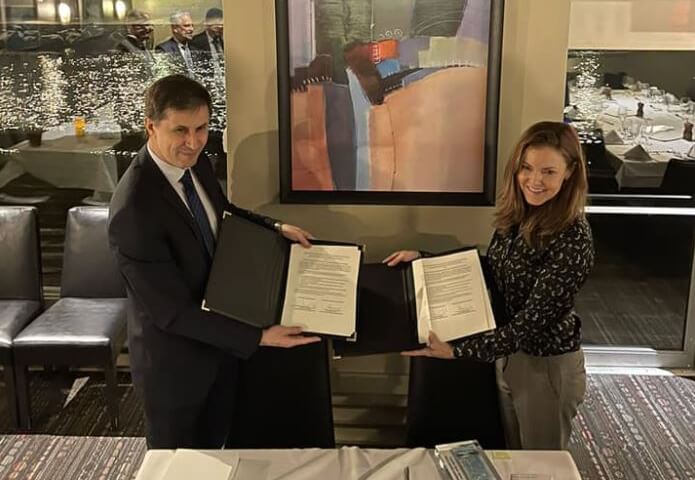 Last week, the delegation of the leader of the Ukrainian rocket industry of the production association Yuzhny Machine-Building Plant named after Makarov (Yuzhmash), headed by First Deputy General Director Konstantin Zavgorodny, took part in a number of events related to the start of the practical implementation of the Ukrainian-Canadian project "Cyclone-4M".

In addition to Yuzhmash, the Ukrainian side of the project was represented by the delegations of the State Space Agency of Ukraine and the Yuzhnoye Design Bureau.

On November 18, in Halifax (Nova Scotia), workshops were held between the Canadian company Maritime Launch Services (the future operator of the rocket and space complex) and Dnipro developers and manufacturers. The Canadian company reported on the start of work on clearing the site for the construction of the first facility at the cosmodrome - the launch control center.

The next day, a presentation and a solemn ceremony of laying the first Canadian commercial cosmodrome using a Cyclone-4M launch vehicle of Ukrainian design and production took place.

Design Bureau "Yuzhnoye" will be responsible for the development, testing and operation of the launch vehicle and ground complex facilities. Yuzhmash will be the manufacturer and supplier of the Cyclone-4M launch vehicle for Maritime Launch Services.

The high level of support for the project from the Canadian government and the authorities of the province of Nova Scotia is a sign of good prospects for the project, which will allow Ukrainian rocket scientists to realize their potential in creating rocket and space transport systems.

Финансовая аналитика, прогнозы цен на сталь, железную руду, уголь и другие сырьевые товары. More news and analytics on Metallurgprom telegram channel - subscribe to get up-to-date market information and price forecasts faster than others.
Сomments
Add a comment
Сomments (0)
On this topic
Yuzhmash told whether it is possible to launch reusable rockets from the Black Sea
CB "South" was visited by a delegation from China
Yuzhmash signed a contract for the supply of 10 more rocket engines for the Vega launch vehicle
Yuzhmash received 210 million hryvnia of state support to pay off wage arrears
Brazil is interested in the production capabilities of Yuzhmash
Yuzhmash has successfully tested the upper stage of the Cyclone-4 launch vehicle
Recommended:
Mining enterprises of Ukraine reduced the export of iron ore by 38.9%
UK extends ban on Russian gold imports
Zaporizhstal summed up the results of production in October 2022
News Analytics
The European Council added the violation of restrictive measures (sanctions) to28-11-2022, 14:22
The abolition of export duty in India may reduce the price of Turkish steel28-11-2022, 14:07
Australia and the UK aim to catch up and overtake China in the battery metal26-11-2022, 22:37
The United States imposed a ban on the import and sale of equipment from26-11-2022, 22:31
The pipe metallurgical plant in Nikopol continued to work after a short stop26-11-2022, 22:52
Commodity prices will fall, metals quotes will rise slightly - Focus Economics28-11-2022, 13:28
Platinum market to face shortage next year - WPIC22-11-2022, 18:25
Global steel demand falls and will fall by 2.3% in 2022: WorldSteel19-10-2022, 23:12
Iron ore prices fall to 11-month low15-10-2022, 10:36
China production cuts in winter will give limited boost to steel markets -15-09-2022, 10:09
Sign in with: