Gas as a weapon of Russia's hybrid war: how to deal with it?

Competition and diversification are the main ways to combat the Russian gas war. This is the conclusion reached by the experts at the Boris Nemtsov Forum in Warsaw. 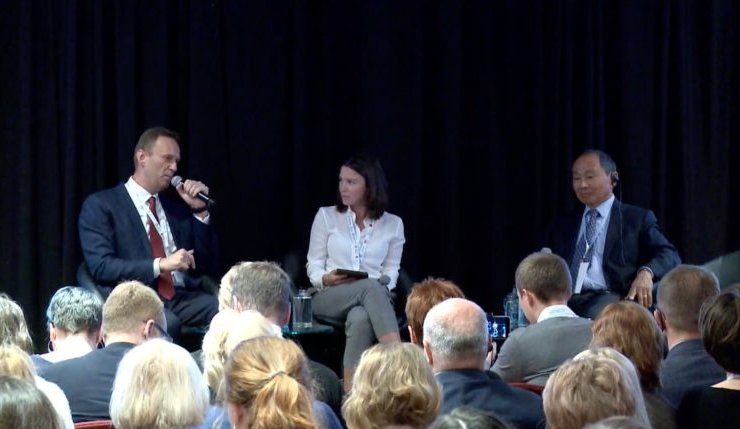 The topic of phobias and the fight against them became one of the main topics at the fourth forum of Boris Nemtsov, which ended in Warsaw on Thursday, October 10. The tensions in Russia's relations with the West caused mutual distrust and various fears both in Moscow and in Europe, the meeting participants are sure.

According to them, one of the main fears of Europeans towards Russia is related to energy, since this industry has long turned into an instrument of geopolitics - Moscow actively uses energy for political abuse, intimidation and even the so-called hybrid war.

Is it possible to fight the use of energy for political purposes and resist Moscow's hybrid war? There are tools for this, experts are sure.

Ukraine suffered more than others

Russia has been using gas for political purposes for almost 15 years, starting in 2005. And each time he became a weapon against Ukraine, says Sergei Aleksashenko, an economist and former Deputy Finance Minister of the Russian Federation. He recalled how in 2006 and 2009 Moscow put pressure on Kiev and threatened to cut off gas supplies.

But the most severe blow will be struck in the near future, when the likely termination of gas transit through Ukraine after the completion of the Nord Stream-2, said Aleksashenko. According to various estimates, Ukraine will lose up to two percent of GDP, which will be a significant loss for it.

But Europe may also suffer. According to the expert, Russian President Vladimir Putin also uses gas for "discord in the EU ". A striking example is the Nord Stream 2 project, on which there are completely different points of view in Europe. With his help, Moscow "bought " the good attitude of German businessmen and politicians, Aleksashenko said. In his opinion, Europe, which now has so many problems, should be afraid that gas will be used as an element of division and incitement to corruption in some countries.

The greatest risk of a hybrid war for countries that are in a "transitional period ", said the expert of the Warsaw Center for Eastern Studies Agata Loskot-Strakhota. In her opinion, Russia's opportunities are weakening due to the fact that these countries are carrying out reforms in the energy sector and diversifying the sources of obtaining resources.

Such risks were faced, for example, by Georgia, but it was able to diversify its sources of resources through contracts with Azerbaijan. Likewise, Lithuania has built a liquefied gas (LNG) receiving terminal and can now receive fuel from various sources. "It has become an independent country in terms of gas supplies from Russia, " said Loskot-Strakhota.

How to Resist Moscow's Hybrid War

Even 20 years ago, Europe as a whole was dependent on Russian gas, recalled the economist and former Deputy Minister of Energy of the Russian Federation Vladimir Milov. "Then the management of " Gazprom "boasted that gas prices would rise several times and nothing could hold them back, " Milov recalled.

However, during this time, the gas infrastructure in Europe has improved significantly, more competition has appeared, including thanks to LNG terminals. The Russian monopolist still sells significant volumes of blue fuel to Europeans, but it can no longer put pressure on partners as it used to, said Vladimir Milov. "Competition takes the poisonous sting away from the monopolist, " the economist summed up.

The head of the Center for Polish-Russian Dialogue and Accord Ernest Wiciszkiewicz added that "Vladimir Putin needs to erect a monument for the fact that a full-fledged joint energy policy has appeared in Europe in 20 years, nothing like this has ever happened before. "

Natural resources are the curse of Russia itself

Russia itself suffers from the actions of the Russian gas monopoly, according to Vladimir Milov. "Gazprom " pays insufficient taxes. And we don't have money for hospitals and schools, but we are spending billions of dollars on a completely unnecessary pipeline to bypass third countries. A monopolist is a predator who takes money from everyone's pockets, "added Milov.

Russia itself faces two dangers associated with dependence on hydrocarbons, experts said. Within ten years, the country, first, will pass the peak of oil production, and it will begin to decline. And secondly, in 2025-2040, the energy balance in the world will increasingly begin to shift towards renewable energy sources, Sergey Aleksashenko believes.

All this will have a very negative impact on the standard of living of Russians.

It does not matter whether Vladimir Putin or another president is in power at that moment, it will be extremely difficult for any leader to cope with the consequences, the economist noted.

Финансовая аналитика, прогнозы цен на сталь, железную руду, уголь и другие сырьевые товары. More news and analytics on Metallurgprom telegram channel - subscribe to get up-to-date market information and price forecasts faster than others.
Сomments
Add a comment
Сomments (0)
On this topic
How the reform of the electricity market in Ukraine can lead to a collapse and what to do about it
Yuzhmash told whether it is possible to launch reusable rockets from the Black Sea
Natural gas in metallurgy: from ore and coke to rolled steel
Ukraine needs to reduce mortgage rates to 8-10% - Confederation of Builders of Ukraine
Stopped nuclear power plants and mines. What's going on in the energy sector of Ukraine?
Tough guy against the comedian – as you can see the upcoming meeting of the two Vladimirov in the
Recommended:
The global steel industry will face its worst quarter since the 2008 crisis
The European Parliament tightened the requirements for the Frontier Carbon Adjustment Mechanism CBAM
Volvo invests $1.25 billion to build electric vehicle plant in Slovakia
News Analytics
The United States refused to impose duties on Russian metals and increase02-07-2022, 09:05
Daimler Truck began testing Actros tractor on liquid hydrogen02-07-2022, 08:54
Volvo invests $1.25 billion to build electric vehicle plant in Slovakia01-07-2022, 18:17
Swedish court authorizes construction of steel mill for the first time in 5001-07-2022, 11:09
AvtoVAZ plans to produce at least 400,000 vehicles in 202301-07-2022, 11:29
High iron ore shortage could halt metallurgy's green transition28-06-2022, 14:02
Price volatility hits global steel market27-06-2022, 19:28
Recovery in China could be key to rising global steel prices - MEPS24-06-2022, 14:00
Conflict in Ukraine spurs Europe's drive for clean energy03-06-2022, 12:14
US steel market sentiment becomes more price neutral05-05-2022, 10:15
Sign in with: