The government of Ukraine has decided to urgently complete negotiations on free trade with Turkey, which have been at an impasse for about 10 years, and sign the Agreement on the Free Trade Zone in the near future. 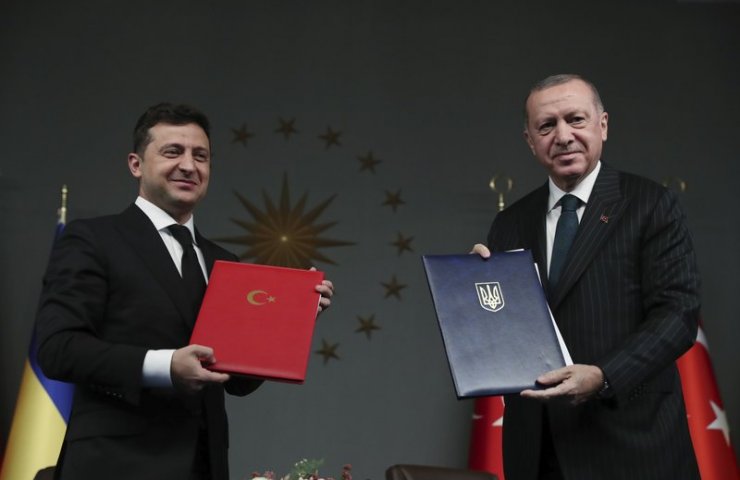 Ukrainian manufacturers are not yet aware of the detailed conditions for their sectors, in particular, access to markets, under the Free Trade Zone Agreement (FTZ) with Turkey, the signing of which, according to the President, is at the home stretch, but requires some approvals. There are also unknown prospects and consequences for the Ukrainian economy as a whole as a result of the conclusion of the Agreement, the Federation of Employers of Ukraine (FRU) said in a statement on Monday.

“We, as Ukrainian manufacturers and employers, are concerned that the desire to obtain political benefits from the signing of an FTA agreement with Turkey may prevail over the trade and economic interests of our state and every Ukrainian. After all, not only imports from Turkey will become cheaper for some items. Ukrainians can lose jobs, and the country - domestic production and budget revenues. As well as the development prospects, ”stressed Dmitry Oleinik, Chairman of the FRU Council.

The Federation of Employers of Ukraine has repeatedly appealed to the government to refrain from further actions towards signing the said Agreement without analyzing the current state of trade and economic relations and its impact on the state of Ukrainian industry.

“The negotiations on an FTA with Turkey have been going on for 10 years. The position of the Ukrainian side was formed and approved 8 years ago. At the same time, for the first time in the past 10 years, we have received a negative balance in trade with Turkey. This suggests that even now, when there is a corresponding duty on both sides, we have a large expansion of Turkish goods into our market. And this is happening, first of all, because the Turkish system of subsidizing its own economy is many times stronger than in Ukraine, "- Ruslan Ilyichev, FRU General Director, is convinced.

In the structure of Ukrainian exports, raw materials and primary processing products prevail, while Turkish companies supply to Ukraine mainly products with a high level of added value. This is a clear example of Turkey's targeted state industrial policy and export promotion policy. In Ukraine, not a single real instrument to stimulate high-tech exports has yet been launched.

According to the industry associations of Ukrainian chemists, metallurgists, representatives of the light and food industries and the automotive industry, the country today is not ready to fully open its market for Turkish products. Domestic producers are in unequal conditions with Turkish ones. The latter receive support from the state in the form of subsidies, reduced taxes and preferential loans, while such support measures are not available in Ukraine.

Turkey actively supports its producers of textile and light industry, due to which almost 18% of Turkey's exports are light industry goods, said Tatiana Izovit, head of the Ukrlegprom Association.

“For 10 years, Turkish exports to Ukraine have already exceeded the corresponding Ukrainian ones by 53 times. We see government support for duties, technoparks, exemption from most taxes, especially in free economic zones, "she said.

“8.5-9% of Ukrainian metallurgy products are exported to Turkey. There are duties across the entire range, and often they are protective in nature from 8 to 22%. In turn, we are not protected from Turkish metal products, ”he said.

Concerned about the prospect of a complete abolition of duties and Ukrainian manufacturers of vehicles. Reducing or establishing zero rates of import duties on products of the automotive industry upon signing the Agreement will open the Ukrainian market for goods from Turkish enterprises, the Federation of Automotive Employers noted. At the same time, domestic producers will remain limited in access to the Turkish market, since in Turkey, in addition to the import duty, imports are limited by a special consumption tax, which ranges from 45% to 145% and which regulates the situation in the domestic car market.

Representatives of the Ukrainian industry called on the authorities to audit Turkey's proposals in dialogue with Ukrainian producers, as well as assess the effect of full market liberalization for individual industries and the Ukrainian economy as a whole, and develop a balanced negotiating position.

The next step should be the formation of an official negotiating position and mandate of the Ukrainian government in negotiations, taking into account the positions of manufacturers and comprehensive studies of the possible effects of a free trade agreement with Turkey for the Ukrainian economy.

Финансовая аналитика, прогнозы цен на сталь, железную руду, уголь и другие сырьевые товары. More news and analytics on Metallurgprom telegram channel - subscribe to get up-to-date market information and price forecasts faster than others.
Сomments
Add a comment
Сomments (0)
On this topic
Turkish business intends to invest in Ukrainian renewable energy and pharmaceuticals
Losses of Ukrainian industry from joining the European "Green Deal" will exceed half a
Ukraine expects difficult negotiations on trade in metal products as part of the renewal of the
How can integrated subsoil use objects help the development of raw materials exports in Ukraine?
How the reform of the electricity market in Ukraine can lead to a collapse and what to do about it
Yuzhmash told whether it is possible to launch reusable rockets from the Black Sea
Recommended:
Brazilian steel industry expects modest growth in 2023: Aço Brasil
India expands RoDTEP export incentive scheme to steel and iron
Oman to build a new steel plant worth $3 billion in 3 years
News Analytics
ArcelorMittal launches flagship carbon capture and recycling project in Belgium08-12-2022, 14:59
The South Korean government "ordered" the striking truckers to return08-12-2022, 11:04
India expands RoDTEP export incentive scheme to steel and iron08-12-2022, 10:28
Volkswagen Anhui's first pre-production NEV rolled off the assembly line08-12-2022, 10:17
Chinese steel exports up 28.2% - customs data07-12-2022, 23:43
Analysts predict 5% annual growth in the iron casting market through 203006-12-2022, 12:44
Commodity prices will fall, metals quotes will rise slightly - Focus Economics28-11-2022, 13:28
Platinum market to face shortage next year - WPIC22-11-2022, 18:25
Global steel demand falls and will fall by 2.3% in 2022: WorldSteel19-10-2022, 23:12
Iron ore prices fall to 11-month low15-10-2022, 10:36
Sign in with: