Antonio Guterres outlined a plan to combat global warming, which, he says, threatens the very existence of human civilization. 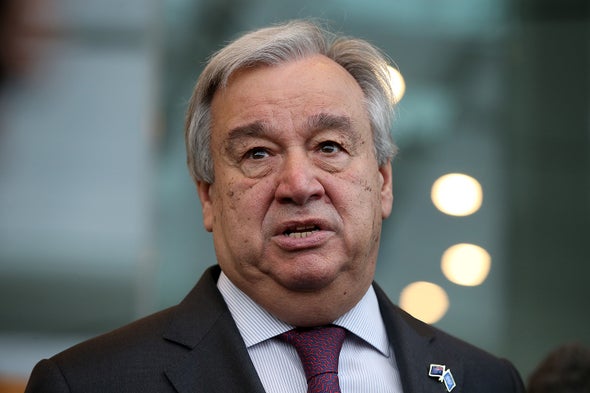 The UN Secretary General said that this century could be the last in the history of mankind due to the ongoing global warming.

"If we do not act now, this century may be the last century for humanity," he warned, speaking to the participants of the forum, which is held under the auspices of the international climate initiative TED Countdown.

Antonio Guterres recalled that, according to scientists, it is necessary to keep the increase in global temperature at the level of one and a half degrees Celsius. Despite the recommendations of climatologists, this task is currently not being performed.

"Billions of people around the world are already suffering from our inaction," said the UN Secretary General. - Due to entrenched dependence on fossil fuels, we are marking time. Global climate change is causing unprecedented forest fires, intense and frequent cyclones, floods, droughts and other extreme weather events.

According to Antonio Guterres, no country in the world is immune from the climate crisis. In addition, in each state, the poorest and most vulnerable segments of the population suffer the most, who are least of all involved in the emergence of the problem of climate change.

“In the past 25 years, the richest 10 percent of the world's population has accounted for more than half of the carbon emissions in the atmosphere, while the poorest 50 percent have accounted for just seven percent. We can still build a safer, more just and sustainable world, but we need to act quickly, ”said the UN head.

Antonio Guterres called on governments and the entire international community to adopt a simple plan based on the following principles:

This action plan is already adhered to by thousands of companies, cities, regions, universities and private investors who have pledged to reduce [greenhouse gas] emissions into the atmosphere by 2050, ”said Antonio Guterres. - I am grateful to those who have already joined our movement. To the rest, I want to say once again that we can win this battle only together. ”

Recommended:
What is billionaire Yaroslavsky building at the Dnipro airport?
Metinvest extended maturity of bonds
The price of electricity for Ukrainian metallurgists turned out to be twice as high as for French
On this topic
Coronavirus pandemic has not stopped global warming - UN
UN Secretary General demanded from Japan to stop financing coal power plants
UN Secretary-General on the situation in the world: wind of hope has been replaced by wind of
The UN Secretary General in Davos stated that without reductions in greenhouse gas emissions "we
The world meteorological organization announced a new climate reality
We have to admit defeat or to make a breakthrough in the fight against global warming - Antonio
Add a comment
Сomments (0)
News Analytics
Innovative matrix headlights on the Audi E-Tron19-10-2020, 22:43
Tensions rise between China and Australia over commodity trade14-10-2020, 18:15
The European Union confirms its intention to introduce a border tax on carbon13-10-2020, 13:20
ArcelorMittal Europe to start producing green steel from 202013-10-2020, 12:44
Kremenchug refinery launched an isomerization unit13-10-2020, 12:43
Dolomite powder market to reach USD 33.44 billion by 202705-10-2020, 12:33
Iron ore prices to surpass six-year high soon16-09-2020, 10:32
World Oil Demand Peak May Be Over - BP15-09-2020, 09:05
China expands car market capacity by increasing demand for steel and metals11-09-2020, 10:56
Prices continue to rise in the long and flat steel markets08-09-2020, 14:25
Sign in with: