This day in history: the first launch of a unique Ukrainian rocket under the Sea Launch program

No one in the world has been able to repeat the Ukrainian-Russian-American project of launches into space from a moving offshore platform. 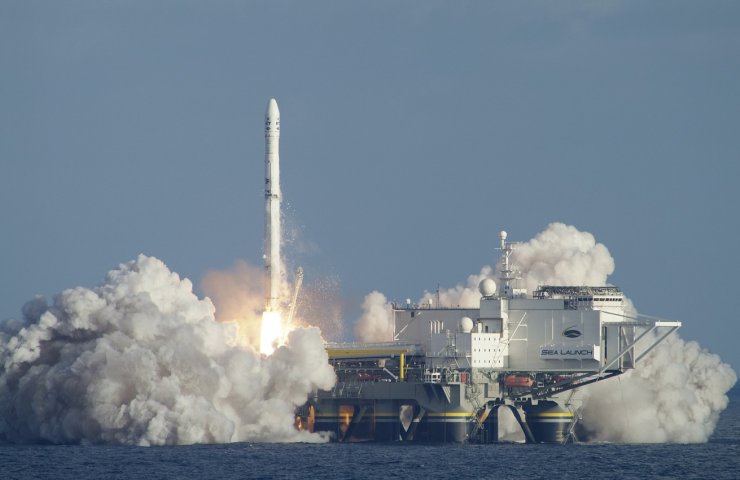 Sea Launch is a transnational project, which included the American corporation Boeing, the Russian rocket and space corporation Energia, the Norwegian shipbuilding company Kvaerner, as well as the Ukrainian enterprises YUZHMASH and Yuzhnoye Design Bureau named after M.K. Yangel ".

The idea of ​​the project was to deliver the launch vehicle by sea to the equator, where the best conditions for launching into space are.

In the history of world cosmonautics, there has already been a similar project - the Italian Space Center Luigi Brogli (San Marco). It was built from two recycled oil platforms that were based in the Indian Ocean. The cosmodrome was used in 1964-1988 for the launches of the American Scout light launch vehicle.

The main difference between Sea Launch and the San Marco project was that the Odyssey platform is not anchored at a certain point of deployment, but can move. In addition, the Italian spaceport was limited in payload. The Scout launch vehicle carried a payload of up to 68 kg, while the Zenit-3SL launch vehicle could launch about 6 tons of payload into a low reference orbit.

Technically, Sea Launch included the Odyssey launch platform with an information communication and launch device, a Zenit-3SL medium-class launch vehicle, the Sea Launch Commander assembly and command ship, and a land base in the port of Long Beach (California).

The Zenit-3SL launch vehicle was specially designed for the Sea Launch project. It was created on the basis of the two-stage flagship launch vehicle Zenit-2. The main advantages of Zenit-3SL are the implementation of fully automatic, without the participation of people, preparation for launch, the versatility of the complex, which made it possible to carry out operational and mass launches of commercial and scientific spacecraft, the ecological cleanliness of the launch vehicle, which excluded environmental pollution by traditional harmful fuel components (they were replaced by the oxygen-kerosene fuel pair), which is important when launching from the ocean and increasing their number.

The Zenit-3SL launch vehicle is a development of the Yuzhnoye design bureau. The first and second stages of the rocket were manufactured at Yuzhmash. In fact, Yuzhmash produced the Zenit-2SL launch vehicle, which was transformed into a three-stage Zenit-3SL already on board the assembly-command vessel by adding a booster block as a third stage.

The Odyssey offshore platform was created on the basis of an oil production platform built in Japan in 1982-1984. In 1996-1997, the platform was re-equipped at the Rosenberg shipyard (Norway) specifically for the Sea Launch project.

Now in the world there is not a single functioning sea spaceport.

In 2019, at the initiative of Yuzhmash, the National Bank of Ukraine issued a commemorative coin dedicated to the 20th anniversary of the world's first launch of Zenit-3SL launch vehicle from a floating launch platform as part of the Sea Launch international project.

Recommended:
Ministry of Economy of Ukraine and ArcelorMittal Kryvyi Rih signed a Memorandum for a billion dollars
Electrotyazhmash was allowed to overhaul the rolling stock of Ukrzaliznytsia
Uralvagonzavod signed a contract for 3 thousand gondola cars
On this topic
2021 will be the year of rapid development of private astronautics
China successfully launched prototype reusable space launch vehicle
Swiss "space flusher" will remove the wreckage of a Vega rocket with Ukrainian engines
NASA, Boeing, Bezos and Musk are heavily influenced by US election results
Alexander Maksimovich Makarov - 114 years old
Yuzhmash told whether it is possible to launch reusable rockets from the Black Sea
Add a comment
Сomments (0)
News Analytics
Electrotyazhmash was allowed to overhaul the rolling stock of Ukrzaliznytsia21-04-2021, 16:17
Dniprostal-Energo initiates an auction for the purchase of electricity on the21-04-2021, 16:08
Zaporizhstal donated a new oxygen station to the Zaporizhzhya Regional21-04-2021, 15:11
Brazil is interested in the production capabilities of Yuzhmash21-04-2021, 14:35
Energoatom ordered a condenser from Turboatom worth 0.5 billion hryvnia for21-04-2021, 14:28
Global hydrogen demand to grow 7-fold by 2070 - PwC21-04-2021, 12:31
World Steel Association predicts a good year for metallurgists15-04-2021, 18:19
World Steel Association defines green steel and its variations12-04-2021, 13:14
China unlikely to cut steel capacity in 2021 due to high steel prices07-04-2021, 12:11
Scrap metal market at the beginning of April02-04-2021, 11:10
Sign in with: