Eight house-sized Gigapress foundries will replace hundreds of robots at the American automaker's Gigafactory in Berlin. 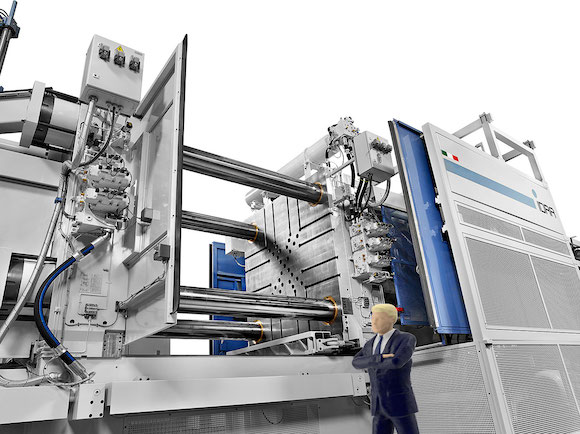 Musk showed off a massive die-casting machine - the largest ever built - last month that will produce the rear end of the Model Y compact SUV as a single component.

A person familiar with Tesla's plans for Germany told reporters this week that the new Gigapress represents a step towards assembling cars from several large modules rather than many different parts. He noted that an aluminum casting machine built by the Italian foundry IDRA is about the size of a small house. And eight of these giants are heading to Tesla's new plant near Berlin.

They will replace hundreds of assembly robots that normally assemble dozens of parts for a car's rear chassis. Gigapress will allow Tesla to eliminate the rivets and welding that usually occurs when assembling smaller aluminum parts.

Tesla pointed out that the rear of the underbody of the car has already been reduced in two. And now the cars should take over the front of the car and other systems.

Musk's quest to reduce manufacturing complexity is driven by German automakers BMW, Mercedes and Audi facing pressure from their workers to maintain domestic assembly jobs that are threatened by the shift to electric vehicles that have fewer components than vehicles with internal combustion engines.

Recommended:
September 7 is the International Day of Clean Air - the UN has prepared a report
The price of electricity for Ukrainian metallurgists turned out to be twice as high as for French
Gold is still perceived as a safe haven amid the pandemic
On this topic
Yuzhmash told whether it is possible to launch reusable rockets from the Black Sea
Tesla lowers the price of the SUV Model Y because of the pandemic
Stopped nuclear power plants and mines. What's going on in the energy sector of Ukraine?
The Kremenchug automobile plant has received an order for a self-propelled chassis of a mysterious
Tesla can count on subsidies from the German government – Minister Altmaier
Lattice rudders Falcon 9 and Falcon Heavy will be made of stainless steel
Add a comment
Сomments (0)
News Analytics
A decrease in business activity is observed in the regional markets for25-09-2020, 15:24
Prices for metal products and scrap metal began to fall in China25-09-2020, 12:14
COVID-19 pandemic plunges global labor income by $ 3.5 trillion24-09-2020, 20:51
The price of electricity for Ukrainian metallurgists turned out to be twice as24-09-2020, 20:47
The 30 millionth LADA car rolled off the assembly line of AVTOVAZ (Video)24-09-2020, 18:12
Iron ore prices to surpass six-year high soon16-09-2020, 10:32
World Oil Demand Peak May Be Over - BP15-09-2020, 09:05
China expands car market capacity by increasing demand for steel and metals11-09-2020, 10:56
Prices continue to rise in the long and flat steel markets08-09-2020, 14:25
Difference between ferrous and non-ferrous metal28-08-2020, 13:45
Sign in with: