Reporting and election trade union conference was held at Energomashspetsstal

On November 24, the XXIII factory reporting and election trade union conference of PJSC Energomashspetsstal took place. The meeting summed up the work for the period from October 2017 to November 2020 and elected the chairman of the trade union organization. 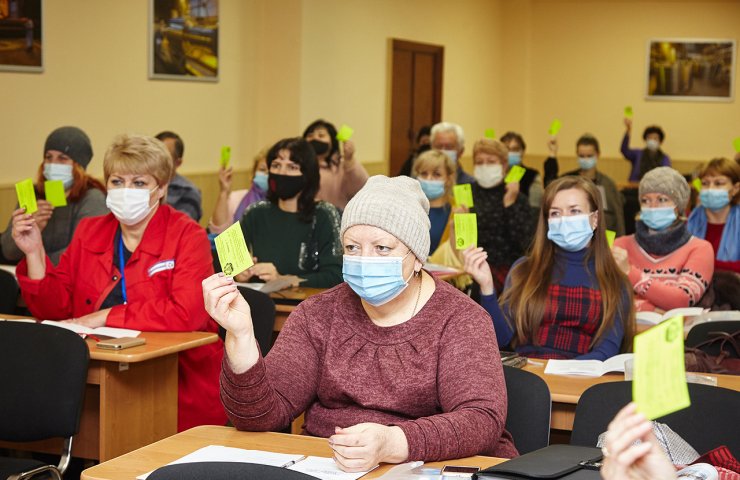 “The effective work of the enterprise in 2018-2019 made it possible to implement all the planned social programs. The collective agreement of PJSC Energomashspetsstal was recognized as one of the best in the nomination “The best collective agreement in the production sphere” among enterprises with more than 1000 employees, ”noted Victor Serbin. - 2020 turned out to be very difficult. A number of issues of trade union activity were not resolved. But, despite the COVID-19 pandemic, we were able to keep the enterprise working. I hope that next year will be more successful and fruitful. ”

Then the conference participants heard a report on the work of the audit commission of the primary organization for the period from October 2017 to November 2020, which was presented by the chairman of this commission Natalya Satsuta.

The chairman of the regional trade union organization of machine building and metalworking workers of Ukraine Alexey Pichakhchi took part in the work of the trade union conference. In his speech, he noted that EMSS fulfills all obligations under the collective agreement, employees take an active part in the public life of the enterprise and the city. Wished the team further success and a good journey.

Recommended:
PJSC "Energomashspetsstal" worked in 2020 without injuries
Ford invests $ 1 billion in South Africa
Elon Musk's Berlin plant will receive a billion dollars in subsidies from the German government
On this topic
At the plant "Energomashspetsstal" was accepted shell of the reactor vessel for Tianwan NPP
"Energomashspetsstal" plans to double the sales in 2020
Energomashspetsstal has shipped to consumers in 2019 20,000 tonnes of steel products and equipment
EMSS invested into labor four million hryvnias
EMSS will supply the largest private steel plant of China 70 ton mill rolls
Vitaly Gnezditsky will work as CEO of Energomashspetsstal for another five years
Add a comment
Сomments (0)
News Analytics
Where and how much gold is there in Ukraine?25-02-2021, 21:28
A plot with copper deposits in the Volyn region of Ukraine has risen in price25-02-2021, 18:26
ArcelorMittal is preparing to announce another price increase in the next few25-02-2021, 18:43
Indonesian gold mine collapse kills 3 people, 5 missing25-02-2021, 18:41
MMK them. Ilyich purchased electricity from Energoatom for 26 million hryvnia25-02-2021, 13:12
Troy ounce of gold will drop $ 500 in two years - Fitch25-02-2021, 18:29
Global iron ore production growth to outstrip cumulative production in India23-02-2021, 10:22
Fitch Ratings Warns of “Shocking Impact” on Fossil Fuel Exporters18-02-2021, 14:44
Raw material prices rise by about 10.5% in January 2021 - Deutsche Industriebank12-02-2021, 10:48
JP Morgan Analysts Announce New Super Growth Cycle in Commodities11-02-2021, 17:56
Sign in with: