For the first time since independence, the state orders three new Ukrainian An-178 aircraft from Antonov, which the army will receive, Ukrainian President Volodymyr Zelenskyy said. 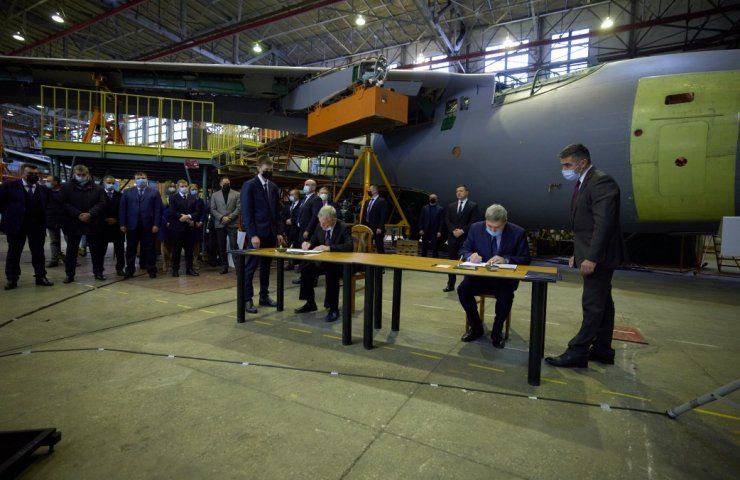 With the participation of President of Ukraine Volodymyr Zelenskyy, a Memorandum was signed between the Ministry of Defense and the State Enterprise "Antonov" on cooperation in the construction of aircraft for the needs of the Armed Forces of Ukraine (AFU).

At the first stage, we are talking about three new military transport aircraft An-178, which will receive the Armed Forces of Ukraine. They can be used to deliver personnel, weapons and light military equipment by landing and parachute methods, as well as to transport goods.

“These new aircraft will be built by Ukrainian citizens, from Ukrainian components, for Ukrainian interests. Actually, the way it should be, "Zelensky stressed before the document signing ceremony, which took place at the Antonov State Enterprise.

Volodymyr Zelenskyy noted that many international partners are showing significant interest in aircraft of the An family, in particular in military transport models.

The President of Ukraine also noted that in the future, such government orders should not be a sensation, but the norm. Therefore, in the near future he expects a full-fledged comprehensive plan from the management of the Antonov State Enterprise to restore and strengthen the personnel potential of the enterprise, return lost professionals and attract new specialists.

Recall that Vladimir Zelensky this spring promised a state order for the manufacture of passenger cars at the Kryukov Carriage Works in Kremenchug. However, as reported at the enterprise, they never received an order from Ukrzaliznytsia.

Recommended:
Naftogaz launches first tight gas field in Svyatogorsk
Russia has expanded sanctions against Germany
An early warning system about man-made disasters has been launched at the Dnieper Metallurgical Plant
On this topic
"Ukroboronprom" introduces to "Antonov" Supervisory Board
"Antonov " intends to enter production of 12 An-178 aircraft per year from 2023 - President of the
Yuzhmash told whether it is possible to launch reusable rockets from the Black Sea
How the reform of the electricity market in Ukraine can lead to a collapse and what to do about it
SE "ANTONOV" announced the beginning of the assembly of the fuselage of the An-178 aircraft for Peru
NATO expressed gratitude to the state enterprise "ANTONOV" for the work in the framework of SALIS
Add a comment
Сomments (0)
News Analytics
Novokramatorsk Machine-Building Plant acquired a unique machining center25-01-2021, 17:27
KAMAZ intends to double the production of electric buses25-01-2021, 15:47
Liberty Steel will submit a firm bid today for ThyssenKrupp Steel Europe25-01-2021, 14:23
A new steel-pouring stand was launched at the Dneprovsk Iron and Steel Works25-01-2021, 13:53
10 miners recovered from exploded gold mine in China25-01-2021, 13:46
China will overtake the United States to become the world's largest economy in27-12-2020, 12:04
The shortage in the US steel market will last at least until the end of the25-12-2020, 11:36
Steel production in China to surpass one billion tons this year23-12-2020, 10:59
Iron ore prices hit seven-year high and continue to rise15-12-2020, 10:26
Prices for metallurgical raw materials continue to rise in regional markets10-12-2020, 11:32
Sign in with: