The main coastal complexes of the RK-360 MC "Neptune" is the MS-400 turbojet engine, which is produced by the Motor Sich company. 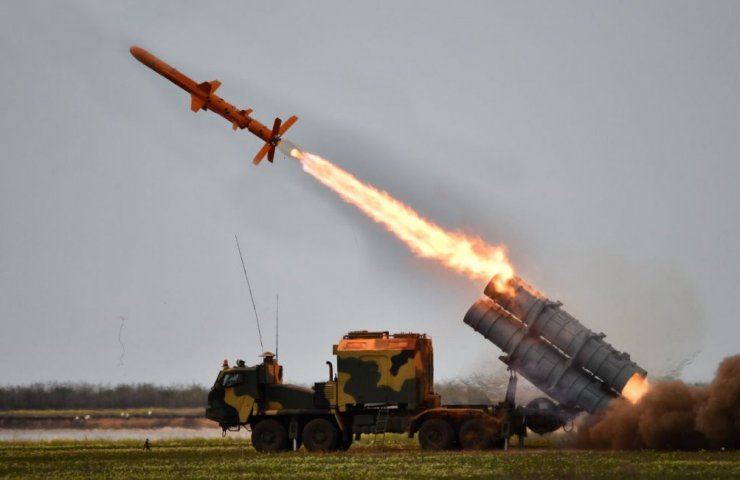 The State Kiev Design Bureau "Luch", which is part of the Ukroboronprom, and the Ministry of Defense of Ukraine signed a contract for the supply of coastal complexes RK-360 of the MC "Neptune" in 2021. This will happen within the framework of the State Defense Order.

New weapons are one of the key high-tech platforms of the concern, which has great prospects, said the Ukroboronprom.

According to the contract, the troops will receive unified launchers, transport and transport-loading vehicles, as well as a mobile command post, where all the information necessary for the operation of the complex is concentrated.

"Neptune" is equipped with cruise missiles, which fly at ultra-low altitudes for a distance of about 300 km. The rocket has a launch and sustainer (main) engines. The first is a modified solid-propellant launch booster from the S-125 anti-aircraft missile. The main turbojet engine MS-400, which is produced by Motor Sich.

The homing head for the missile, which has ultra-high viewing angles and is capable of detecting and locking on a target at a distance of up to 50 km, was developed by the Ukrainian research and production enterprise "Radionix" together with the State Joint Stock Holding Company "Artem", which is part of Ukroboronprom.

The "Neptune" complex was adopted by the Armed Forces of Ukraine on August 23, 2020.

Recommended:
Metinvest paid off part of its pre-export financing obligations ahead of schedule
Dniprovsky Metallurgical Plant invested 244 million hryvnia in its development in 2020
American steel producers have simultaneously raised prices for rebar by $ 50 at once
On this topic
17 enterprises will be withdrawn from Ukroboronprom
"Ukroboronprom" introduces to "Antonov" Supervisory Board
"Ukroboronprom" announced the curtailment of the reform of the country's military-industrial complex
Ukroboronprom signed a framework agreement for fuel supplies without tenders
Since the beginning of 2020, the staff of Ukroboronprom has been updated by more than 30%
Yuzhmash told whether it is possible to launch reusable rockets from the Black Sea
Add a comment
Сomments (0)
News Analytics
Trump's legacy - carmakers shut down factories over Chinese chip shortages24-01-2021, 12:05
Adviser to the President of Ukraine: We expect 2021 to be a year of economic24-01-2021, 11:52
11 miners rescued from exploding gold mine in China on January 1024-01-2021, 11:05
Mariupol metallurgists continue environmental modernization despite the pandemic24-01-2021, 11:01
Industry association predicts 8% growth in passenger car sales in China in 202123-01-2021, 11:07
China will overtake the United States to become the world's largest economy in27-12-2020, 12:04
The shortage in the US steel market will last at least until the end of the25-12-2020, 11:36
Steel production in China to surpass one billion tons this year23-12-2020, 10:59
Iron ore prices hit seven-year high and continue to rise15-12-2020, 10:26
Prices for metallurgical raw materials continue to rise in regional markets10-12-2020, 11:32
Sign in with: