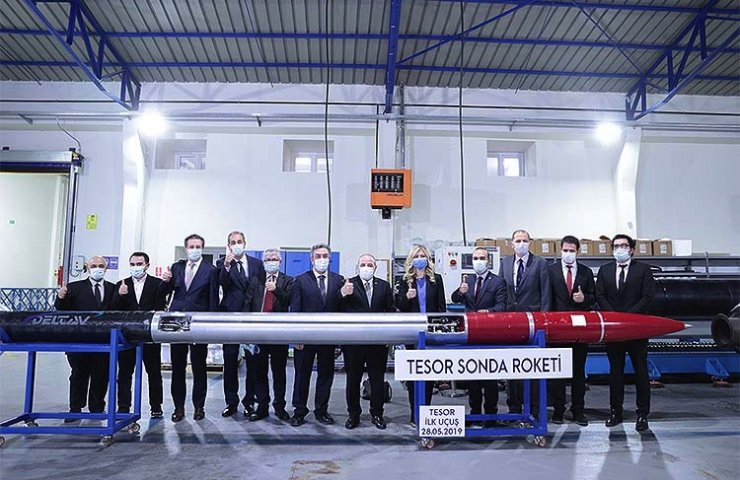 Minister of Industry and Technology Mustafa Varank inspected the facilities of Delta V Space Technologies Inc., where a unique hybrid rocket and unmanned spacecraft was developed, which is planned to be sent to the moon for the 100th anniversary of the Turkish republic. According to him, Delta V has developed a unique hybrid engine technology that is an important component of the mission to the moon.

“We will reach the Moon by launching a unique national hybrid rocket. Today we visit the facilities of Delta V, which develops unique hybrid engine technologies that are an important part of the mission to the moon. The company was founded in 2016 and has been working on space development since 2017. As part of the mission to the moon, we expect mainly the development of engines that will allow us to carry out launches into space, ”the minister emphasized.

On February 9, Turkish President Tayyip Erdogan presented to the public plans for the development of the national space program, it provides for the dispatch of a rocket in 2023, which will have to reach the surface of the Moon. According to the Turkish leader, a hard landing on the moon should be carried out by the 100th anniversary of the republic, which will be celebrated at the end of 2023.

“The program aims to bring the country to the top league in the space sector and to increase the share of the developing space economy. Turkey is a space country that has all the advanced capabilities in the field of astronautics. Within the framework of the national space program, prepared by the Turkish Space Agency (TUA), the main goals were determined to be achieved in joint coordination with the involvement of all possibilities, "Varank said.

Turkey plans to launch its own astronaut training program after 2023. Ankara intends to spend about $ 6 billion on this project.

Recommended:
Minister of Infrastructure of Ukraine invites Azerbaijan to invest in transport projects
US and Germany Discuss Reducing Excess Steel Capacities
China to build the world's most powerful hydroelectric power plant
On this topic
Max Polyakov's Firefly Aerospace plans two launches of the Alpha space rocket in 2021
2021 will be the year of rapid development of private astronautics
Swiss "space flusher" will remove the wreckage of a Vega rocket with Ukrainian engines
NASA, Boeing, Bezos and Musk are heavily influenced by US election results
Yuzhmash told whether it is possible to launch reusable rockets from the Black Sea
The company of Ukrainian businessman plans to deliver on the moon scientific equipment
Add a comment
Сomments (0)
News Analytics
Iran is satisfied with the reaction of the world community to 60% enrichment of18-04-2021, 13:24
Gas prices in Ukraine have reached a record value over the past two years -16-04-2021, 17:24
Ukrmetallurgprom asks the Antimonopoly Committee to allow Metinvest to bid for16-04-2021, 17:23
A fatal accident occurred on the territory of the Dnieper Metallurgical Plant16-04-2021, 13:01
Cars built for Euro 2012 will be repaired at the Kryukov Carriage Works16-04-2021, 12:46
World Steel Association predicts a good year for metallurgists15-04-2021, 18:19
World Steel Association defines green steel and its variations12-04-2021, 13:14
China unlikely to cut steel capacity in 2021 due to high steel prices07-04-2021, 12:11
Scrap metal market at the beginning of April02-04-2021, 11:10
Rising Chinese Prices Fueled Rising Global Steel Prices - MEPS25-03-2021, 18:54
Sign in with: