The three largest marine engine manufacturers are developing hydrogen engines for large ships as part of an effort to accelerate the development of hydrogen powered ships. 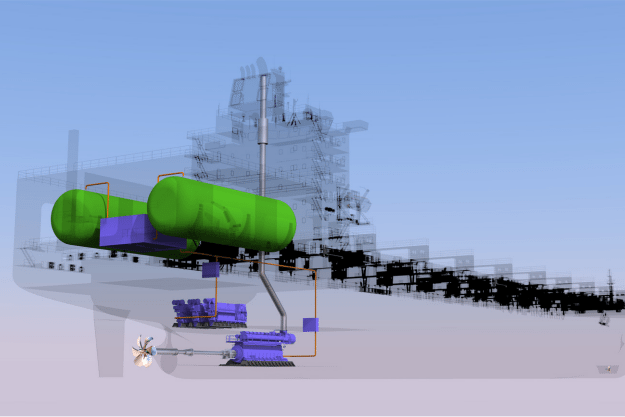 KHI and Yanmar are already involved in projects to develop small hydrogen ferries for domestic routes. KHI and other Japanese companies, including the shipping company NYK Line, plan to pilot a hydrogen fuel cell passenger ferry in Yokohama Harbor in 2024. Yanmar is partnering with Mol Techno-Trade, a subsidiary of Japanese shipping company Mitsui OSK Line, to develop a small hydrogen-powered ferry.

Japan is awaiting the official launch of the HydroBingo, the country's first 19-ton hydrogen vessel. The hydrogen fueled ferry was developed by the Belgian shipping company CMB and the Japanese shipbuilding company Tsuneishi Facilities & Craft.

Demand for hydrogen as a marine fuel is expected to grow as the international shipping industry seeks to reduce greenhouse gas emissions by at least 50% by 2050 from 2008 levels. A number of countries, including Japan, have also tightened their greenhouse gas emission reduction commitments to achieve decarbonization by 2050, prompting Japanese shipbuilders to accelerate the transition to greener, zero-emission vessels and leverage the potential of decarbonization to compete with their Chinese and South Korean competitors. .

Recommended:
US urges Ukraine not to criticize Nord Stream 2 deal - Politico
Abnormal heat in Canada leads to the suspension of uranium mining at a mine in Saskatchewan
Apple will replace stainless steel with titanium alloy in the cases of the new iPhone 14
On this topic
South Korea has come up with a technology that allows you to extract hydrogen from ammonia without
Prospects for ship repair in Ukraine
Korean auto makers will switch to hydrogen engines with help from Chinese steelmakers
South Korean DSME to build six LNG carriers for Arctic LNG 2
Yuzhmash told whether it is possible to launch reusable rockets from the Black Sea
How the reform of the electricity market in Ukraine can lead to a collapse and what to do about it
Partner news
Сomments
Add a comment
Сomments (0)
News Analytics
National Bank of Ukraine predicts economic growth in 2021 by 3.8%29-07-2021, 23:32
"Electrotyazhmash" shipped the stator housing of the hydrogenerator to the29-07-2021, 18:00
Gas price in Europe exceeded $ 500 per thousand cubic meters29-07-2021, 16:43
German concern ThyssenKrupp sells its mining business29-07-2021, 16:22
We are working hard: Ukrzaliznytsia records record indicators of daily load29-07-2021, 11:56
Steel raw materials prices decline in all regional markets27-07-2021, 11:57
On the regional markets of metallurgical products, prices are balancing in a22-07-2021, 16:22
Demand for armaments will ensure a stable growth of armored steel sales by 4%20-07-2021, 10:10
Protectionist Measures Support European Steel Prices Despite Summer Lull19-07-2021, 11:02
Positive price growth is observed in the markets for metallurgical products16-07-2021, 14:12