The head of the Organization for Security and Cooperation in Europe was interested in the situation in the Kerch-Yenikalsky Canal and information on free access to the ports of the Azov Sea. 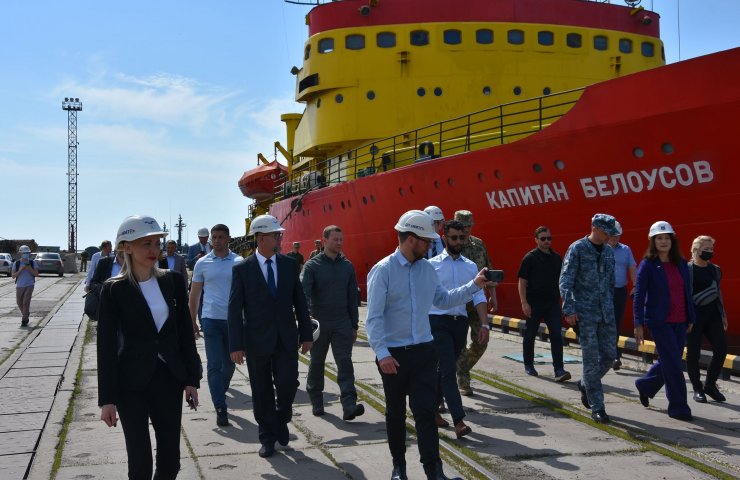 This morning, a delegation led by the Chairman-in-Office of the Organization for Security and Cooperation in Europe (OSCE), Minister of Foreign Affairs of Sweden, Ms. Ann Linde, visited the port of Mariupol.

Accompanied by the acting director of the port Igor Barsky, the chairman of the Donetsk regional state administration, the head of the regional military-civil administration Pavel Kirilenko and representatives of the city and district council of Mariupol, Mrs. Ann Linde visited the 18th berth, where a high-tech terminal for transshipment of steel leaf and on the fourth, where a powerful grain complex is being built.

The OSCE Chairman was shown the only icebreaker in Ukraine, and also told about the situation in the Kerch-Yenikalsky Canal.

The dominant topic for Ann Linde was security issues, in particular, about freedom of navigation in the Black and Azov Seas. But in a conversation with Igor Barsky, she was also very interested in the capacity of the Mariupol port and the range of cargo. Because, as it turned out, the maritime theme for ladies Ann Linde is about personally, because she herself comes from one of the Swedish cities where there is a seaport.

Igor Barskiy noted that the Mariupol port is the most powerful in the Azov Sea, as evidenced by facts and figures.

“By 2014, our port consistently handled 14-15 million tons of cargo annually, and there was a year, and 17.5 million tons. At that time, metal products were supplied to us from ten enterprises in the east of Ukraine. There were many building materials and containers. In order to return the lost part of the cargo, we are building a grain complex, this is all for the future, for our children, "- said Igorb Barsky.

Финансовая аналитика, прогнозы цен на сталь, железную руду, уголь и другие сырьевые товары. More news and analytics on Metallurgprom telegram channel - subscribe to get up-to-date market information and price forecasts faster than others.
Сomments
Add a comment
Сomments (0)
On this topic
Ukrainian ports reached a record volume of transhipment cargo
Ferrexpo has appointed a new member of the Board of Directors
Ukrainian seaports handled 66.1 million tons of cargo in 6 months of 2021
Port "South" has set an absolute record in handling most of them ore and coal
For 11 months of 2020, the port of Mariupol increased steel transshipment by a third
Metinvest will create new jobs for youth
Recommended:
London Metal Exchange for the first time in history banned trading for ethical reasons
Steel market in Europe expects big production cuts due to weak demand
For 8 months of 2022, steel production in Ukraine fell by 64.5%, to 5.2 million tons
News Analytics
EBRD downgrades Ukrainian economic growth forecast for 2023 from 25% to 8%28-09-2022, 13:57
EU plans additional sanctions against Russian metallurgy27-09-2022, 10:34
The European Commission has approved 5.2 billion euros of state support for27-09-2022, 10:43
China's leading industrial profits fall 2.1% in first 8 months27-09-2022, 10:20
Moody's changed the outlook for the global mining industry to26-09-2022, 19:04
China production cuts in winter will give limited boost to steel markets -15-09-2022, 10:09
Steel prices may rise as manufacturers stop production11-09-2022, 14:06
IREPAS: The global long products market is in a "dramatic situation"10-09-2022, 20:49
Steel prices are unlikely to rise significantly in the near future - analysts02-09-2022, 22:58
Steel prices may move up on new data from China31-08-2022, 12:19
Sign in with: