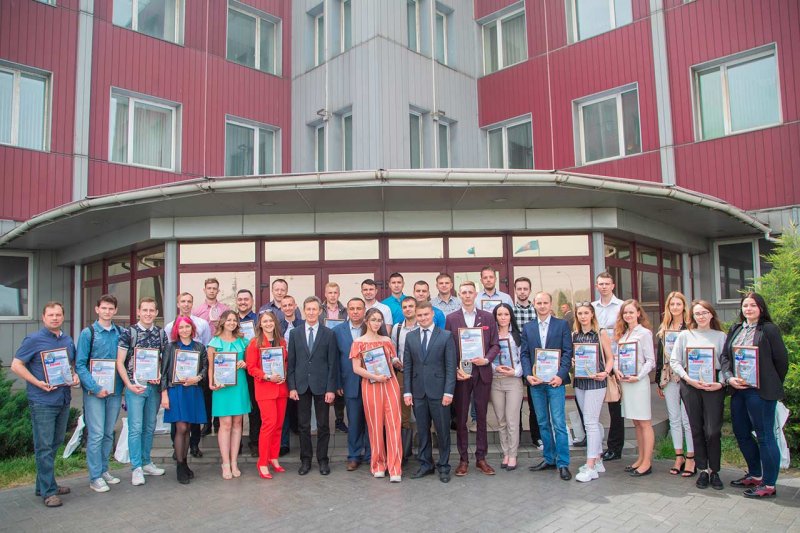 Traditionally, July for BMZ employees and residents of Zhlobin is a month full of solemn events timed to coincide with the professional holiday - Metallurgist Day. The current 35th year of the factory history is no exception. We are publishing a brief overview of past celebrations.

& bsp; & bsp; On July 4-5, BMZ held the 19th international scientific and technical conference "Metal-2019". It brought together metallurgists from Belarus, Russia, Ukraine and Moldova, as well as students of domestic technical universities, once again becoming an excellent platform for the exchange of experience among young people.

& bsp; & bsp; On July 11, in the Palace of Culture of Metallurgists, the final of the 9th amateur art competition of the plant's labor collectives “Let BMZ sound proudly!” Was held with a full house. Metallurgists have proved that there are really a lot of talented people at BMZ. The third place in the competition was taken by the OTK team, the second - by TsRMO, and the first - by the TPC. All winners and nominees received certificates and monetary awards.

& bsp; & bsp; On July 13, the plant friendly welcomed the guests: an open door day was held at BMZ. The popular holiday attracted over 2,500 visitors. For them, the organizers prepared a rich program and a special surprise: at the Doors Open Day there were presentations of the factory mascot - the keeper of the fire energy of the steelman Iskrik - and a book about his adventures at BMZ. By the way, the children did not come to the holiday empty-handed either. They presented the plant with about 800 bright drawings and postcards.

& bsp; & bsp; On July 14, Zhlobin hosted the Interstate Athletics Run dedicated to the Day of Metallurgist. About 270 athletes entered the start of the competition, covering distances of 5, 10 or 20 kilometers.

& bsp; & bsp; On July 16, the opening of an exhibition of creative works of employees of the enterprise "Magic of Creativity" and an evening honoring BMZ labor veterans took place. Traditionally, on this holiday, congratulations were received by a family that received the honorary title of “Labor dynasty of BMZ”! This year, this honor was awarded to the Tsapko family. Currently, five of its representatives are employees of the Belarusian Metallurgical Plant. The total work experience of the family is 105 years!

& bsp; & bsp; On July 19, employees were honored at the plant, whose names were entered on the updated Board of Honor. On the same day, two new entries were added to the plant's Book of Honor: the names of the senior foreman for the repair and maintenance of electrical equipment in the hammering shop, Alexander Ilyich ZYATIKOV, and the steel caster of the electric steel-making shop No. 1, Yuri Vladimirovich IVANIN, were added to it. They were awarded the title of "Honorary Worker of the Belarusian Metallurgical Plant." It is worth noting that three factory workers - head of the electric steel-making shop No.1 Nikolai Targonsky, deputy head of the steel wire shop No.2 Yulia Lyundysheva and instrumentation fitter Alexander Vladyko - were awarded the Honorary Diplomas of the Council of Ministers of the Republic of Belarus. The well-deserved awards were presented to them by the Minister of Industry Pavel Utyupin.

& bsp; & bsp; Saturday morning, July 19, in the factory microdistricts began with fanfare of a brass band and a track and field relay race for the prize of the General Director of OJSC “BMZ” - the managing company of the “BMK” holding. 14 teams of shops, unitary enterprises, and a trade union committee took part in it. The best were the representatives of SPC-2, the second place went to SPC-1, and the TPC team finished the top three.

& bsp; & bsp; Following a good tradition, on the Day of Metallurgist, a meeting was held at the memorial plaque of the first director of BMZ D.L. Akopov. The workers of the plant, labor veterans and representatives of the young generation of metallurgists came to pay tribute to the memory of the man who laid a solid foundation for the city of metallurgists and largely determined the future of our enterprise.

& bsp; & bsp; The main platform of the big metallurgists' holiday was the Five Elements Park. It has turned into a real entertainment center for children and adults. The ceremonial opening of the festive events marked the traditional youth flash mob, giving a start to the performances of the creative teams of the Palace of Culture of Metallurgists. Their perky numbers served as a vivid decoration of sports competitions: the tournament of the chess and checkers club "Splav", competitions in power sports, street ball, free throws competition, as well as three-point throws. And the epicenter of the program is the Family Parade entertainment and game competition.

& bsp; & bsp; The most anticipated event of the festive program of the Day of Metallurgist was an evening concert with the participation of Belarusian and Russian pop stars. & bsp; Before the start, Anatoly Volkov, Acting General Director of the Belarusian Metallurgical Plant, addressed his congratulations to the plant workers. The head thanked the team and labor veterans for the achievements that he has glorified for 35 years

Финансовая аналитика, прогнозы цен на сталь, железную руду, уголь и другие сырьевые товары. More news and analytics on Metallurgprom telegram channel - subscribe to get up-to-date market information and price forecasts faster than others.
Сomments
Добавить комментарий
Комментарии (0)
On this topic
The heroes of Professional Olympus-2019 were named at BMZ.
BMZ will bring together young metallurgists from Belarus, Russia, Ukraine and Moldova for a
Congratulations from the Minister of Industry on the birthday of BMZ.
The winners of the youth award were named at BMZ.
Honoring the best workers, and the performances of record-holders of Guinness world records: at BMZ
BMZ employees won 10 out of 12 first places at the international scientific and technical conference
News Analytics
Eurofer expects EU steel demand to fall 4.6% in 2022 and 1.6% in 202305-02-2023, 13:31
EU Green Deal should encourage investment in mild steel projects: Eurofer02-02-2023, 16:32
Belarusian steel plant to operate at full capacity from February02-02-2023, 16:56
British Steel considers cutting up to 1,200 jobs at Scunthorpe02-02-2023, 11:50
Electric vehicles will play a key role in US aluminum production growth - Norsk01-02-2023, 12:17
European stainless steel producers ready to raise prices31-01-2023, 16:16
S&P: Russia will continue to dominate the steel export market in the Black05-01-2023, 11:22
Fitch Analysts Predict Big Drop in Global Steel Consumption This Year14-12-2022, 13:59
Analysts predict 5% annual growth in the iron casting market through 203006-12-2022, 12:44
Commodity prices will fall, metals quotes will rise slightly - Focus Economics28-11-2022, 13:28
Sign in with: