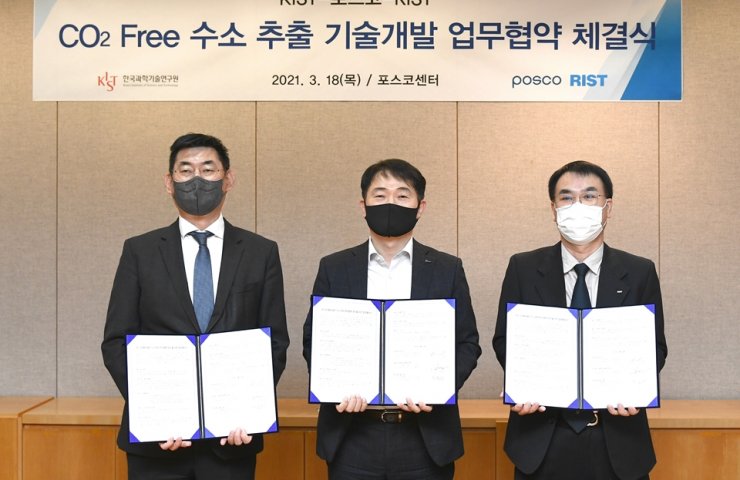 South Korea's largest metallurgical company POSCO, KIST (Korea Institute of Science and Technology) and RIST (Research Institute of Industrial Science and Technology) have signed an agreement on the practical implementation of technology for extracting hydrogen from ammonia. The improved technology will allow the extraction of hydrogen from ammonia without greenhouse gas emissions and will be used for commercial use and for residential power plants in the future.

Numerous technologies are currently being discussed as ways of transporting hydrogen, including hydrogen liquefaction, ammonia synthesis and other new technologies. Among them, ammonia synthesis is considered the most effective. This is due to the fact that when hydrogen is synthesized into ammonia, there is no need to create a new distribution network for transportation, and the level of losses in the delivery process does not exceed the permissible limits. However, although the technology for the synthesis of hydrogen to ammonia has already been commercialized, the technology for the extraction of hydrogen from ammonia is still at an early stage.

POSCO plans to increase its competitiveness in the clean hydrogen business by advancing technological advances in the extraction of hydrogen from ammonia in large quantities. Thanks to this progress, the company will in the future supply environmentally friendly hydrogen abroad as a raw material and source of energy for domestic industry and power plants.

Last year, KIST successfully developed a technology for extracting high purity hydrogen from ammonia. Through collaboration with POSCO, KIST plans to develop a catalyst that can efficiently recover hydrogen from ammonia. RIST is working to expand the high capacity ammonia hydrogen recovery process to industrial scale.

Earlier on March 8, POSCO signed a business agreement with Origin Energy, Australia's largest electricity and gas supplier, to introduce ammonia, which is necessary to use green hydrogen in Korea. Since working with Fortescue Metal Group last December, POSCO has joined forces for the second time to implement an overseas clean hydrogen project.

Origin Energy is currently developing a project to produce 70,000 tons of green hydrogen per year using hydropower with a capacity of 500 MW in Tasmania, southern Australia. The idea is this: hydrogen produced in Australia will be synthesized into ammonia, and POSCO will use it to extract and supply hydrogen.

The clean hydrogen business model currently being pursued by POSCO is the production of hydrogen by electrolysis of water from renewable energy sources such as wind and solar power. Hydrogen is synthesized into ammonia to increase efficiency, then transported and stored. Finally, hydrogen is recovered and used as a raw material and energy source for industrial and power plants.