At Mikhailovsky GOK (Kursk region, RF), a crushing and conveyor complex with a unique steeply inclined conveyor created at NKMZ was put into operation. 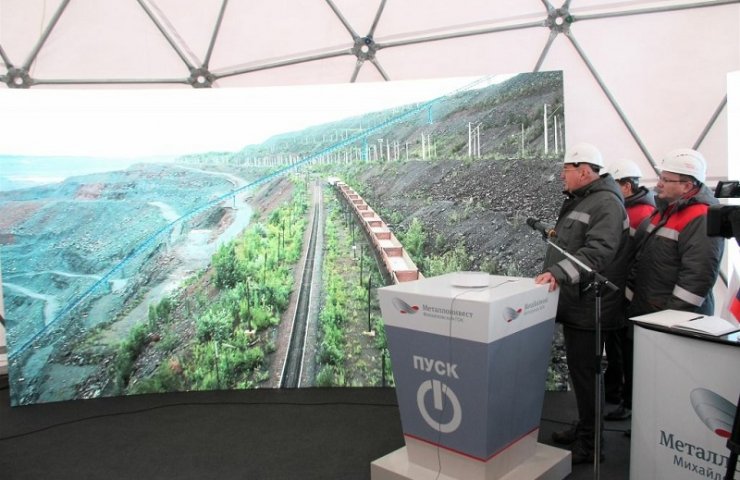 A crushing and conveyor complex (DCC) with a unique steeply inclined conveyor (KNK) was put into operation at the Mikhailovsky mining and processing plant (Zheleznogorsk, Kursk region, RF). As noted in the press service of the main equipment manufacturer Novokramatorsk Machine-Building Plant (NKMZ), the complex started working from the first press of the "Start" button.

Advanced crushing and transportation equipment created in the Ukrainian Kramatorsk will increase the productivity of the crushing complex to 15 million tons of ore per year.

“NKMZ has established itself as a reliable partner, a manufacturer of high-quality equipment,” said Nazim Efendiev, CEO of Metalloinvest Management Company. Describing the importance of the new complex, he said: “We are proud to be the first in Russia to launch conveyor technology, which significantly increases the efficiency of the production process. DCC allows us to involve high-quality ore reserves in development and maintain a high level of concentrate production - over 17 million tonnes per year. The introduction of a new configuration of the mining transport scheme will allow us to reduce the cost of ore mining: the number of transshipment points, loading equipment and railway transport is reduced. The use of conveyor technology will make it possible to use natural resources more carefully and reduce the amount of overburden. ”

Another component of the DCC efficiency is the improvement by reducing the number of heavy vehicles of the environmental situation both in the open pit more than 370 m deep, and in the surrounding area.

As part of this large-scale project, the implementation of which lasted for three years, NKMZ manufactured and supplied about 7 thousand tons of modern equipment to Mikhailovsky GOK.

The process chain of the crushing and conveyor complex includes a crushing and transfer unit, where the iron ore delivered by dump trucks undergoes two crushing stages and is crushed to pieces of 150 mm in size. Then the ore is unloaded onto a steeply inclined conveyor, which at an angle of 37 o lifts it aboard a 215 m high pit.

At the end of the technological chain is a loading and warehouse complex, which consists of a warehouse conveyor and a stacker.

The steeply inclined conveyor is NKMZ's know-how, in the CIS only this enterprise has experience in creating such unique conveyors. The first of them was commissioned in 2011 in the Muruntau quarry of the Navoi MMC (Republic of Uzbekistan). Feedback from Uzbek gold miners testifies to the effectiveness of the unique KNK and other equipment of cyclic-flow technology with the NKMZ brand.

It should be noted that the crushing and conveyor complex of the Mikhailovsky GOK was handed over by NKMZ specialists on a turnkey basis, taking upon themselves, in addition to developing projects for working equipment, mining and geological and environmental surveys, preparation of documents for passing the Main State Expertise of the Russian Federation for this object.

The chief designer of mining and forging equipment Yuri Silchenko notes: “Most of the quarries for mining in Ukraine, Russia, Kazakhstan, Uzbekistan today have exceeded a depth of more than 300 m. At such depths, the use of only road and rail transport makes the transportation of minerals very expensive , the cost of the final product rises sharply. Therefore, GOKs will have to switch to conveyor transport. After evaluating the operation of the crushing and conveyor complex of the Mikhailovsky GOK, they will be able to make sure that this technology works not only on soft gold-bearing ores, as in the Navoi MMC, but also on heavy ones, as in the Mikhailovsky GOK. And they will also implement this technology. ”

Финансовая аналитика, прогнозы цен на сталь, железную руду, уголь и другие сырьевые товары. More news and analytics on Metallurgprom telegram channel - subscribe to get up-to-date market information and price forecasts faster than others.
Сomments
Add a comment
Сomments (0)
On this topic
Yuzhmash told whether it is possible to launch reusable rockets from the Black Sea
China's largest steel producer to become even larger and number one in the world in terms of
"Naftogaz" has filed a lawsuit against the government of Ukraine for the issuance of a
The Eurasian Commission has announced the final amount of duties on Ukrainian zinc
From Ferrexpo retired marketing Director
Max Polyakov's Firefly Aerospace plans two launches of the Alpha space rocket in 2021
Recommended:
Nigeria can turn Russian-Ukrainian conflict to its advantage - Lee Engineering Group
Metinvest reduced the use of its capacities by more than 40% due to the war in Ukraine
Norway becomes the first Volvo Cars market to offer exclusively electric models
News Analytics
The United States refused to impose duties on Russian metals and increase02-07-2022, 09:05
Daimler Truck began testing Actros tractor on liquid hydrogen02-07-2022, 08:54
Volvo invests $1.25 billion to build electric vehicle plant in Slovakia01-07-2022, 18:17
Swedish court authorizes construction of steel mill for the first time in 5001-07-2022, 11:09
AvtoVAZ plans to produce at least 400,000 vehicles in 202301-07-2022, 11:29
High iron ore shortage could halt metallurgy's green transition28-06-2022, 14:02
Price volatility hits global steel market27-06-2022, 19:28
Recovery in China could be key to rising global steel prices - MEPS24-06-2022, 14:00
Conflict in Ukraine spurs Europe's drive for clean energy03-06-2022, 12:14
US steel market sentiment becomes more price neutral05-05-2022, 10:15
Sign in with: