NKMZ will ship the third cooler to Poltava GOK 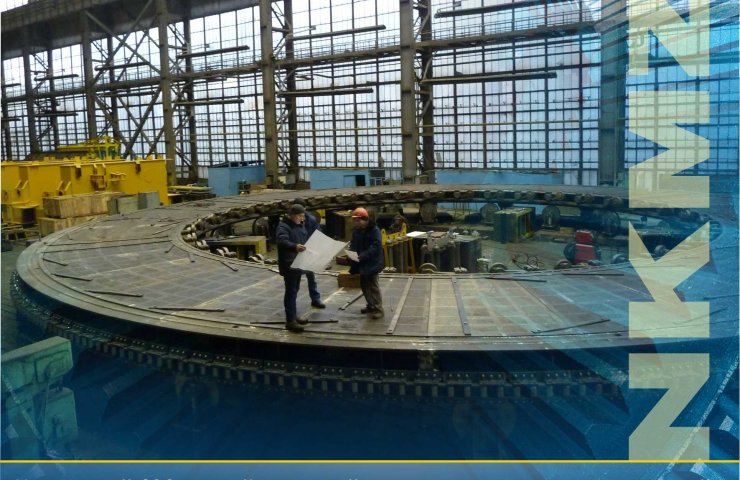 Another, third, unique 400-ton ring cooler for iron ore pellets, designed and manufactured by Novokramatorsk Machine-Building Plant for Poltava GOK, is being prepared for shipment to the customer.

The pellet production shop at Poltava GOK consists of four technological lines for the production of iron ore pellets. In each of them, an annular cooler is the final link, is a conveyor grate in the form of a ring, divided into four zones, and performs cooling of the pellets to a temperature of 120 ° C.

Four ring coolers produced by the American company Allis Chalmers have been operating at Poltava GOK since the 70s of the last century. To replace this morally and physically worn out equipment, the Poltava miners ordered the first ring cooler from NKMZ, which was put into operation in 2013. For the first time, the domestic ring cooler, created by the Novokramatorsk workers, was highly appreciated. The design of one of the main elements of the cooler - pallets, proposed by NKMZ, significantly surpassed its analogues in strength and wear resistance. (Pallets form an annular field on which hot pellets are laid out, cooling air is blown through the slots.)

Therefore, when the Poltava miners needed a second ring cooler, they also ordered it from NKMZ. It was commissioned in 2019, and the miners were also pleased with it. And it is logical that this order was followed by a third one.

The construction of each subsequent cooler was improved by the Novokramatorsk workers, improving the lubrication system, further increasing the reliability and durability of the units, which also pleases the miners.

Recommended:
Ukrmetallurgprom asks the Antimonopoly Committee to allow Metinvest to bid for DMK
Half of the new DMZ employees came to the plant under the action "Bring a friend - get a bonus"
A fatal accident occurred on the territory of the Dnieper Metallurgical Plant
On this topic
Installation of a spreader made by Ukrainian NKMZ continues in Uzbekistan
A unique Ukrainian crushing complex has started operating in the iron ore quarry of the Kursk
Yuzhmash told whether it is possible to launch reusable rockets from the Black Sea
Novokramatorsky Mashinostroitelny Zavod re-entered the market of coke chemical equipment
NKMZ shipped the Dnieper metallurgical plant unique steel teeming stand
Zaporozhye NPP specialists save their coolers from Amazonian shells
Add a comment
Сomments (0)
News Analytics
China's Non-Ferrous Metals Sector Records High First Quarter Profits08-05-2021, 15:43
Copper price rises to a record high08-05-2021, 10:17
Dneprotyazhmash manufactures technological equipment for DMK07-05-2021, 10:07
The National Bank of Ukraine will sell 46 tons of scrap metal from obsolete07-05-2021, 10:10
Dnieper Metallurgical Plant DCH Steel in April reduced steel production by 2.8%07-05-2021, 09:18
The current state of the market is ideal for the sale of rolled steel - IREPAS04-05-2021, 18:41
Global hydrogen demand to grow 7-fold by 2070 - PwC21-04-2021, 12:31
World Steel Association predicts a good year for metallurgists15-04-2021, 18:19
World Steel Association defines green steel and its variations12-04-2021, 13:14
China unlikely to cut steel capacity in 2021 due to high steel prices07-04-2021, 12:11
Sign in with: