The only uranium mining enterprise in Ukraine may stop again and this is not the worst thing, the trade unions warn. 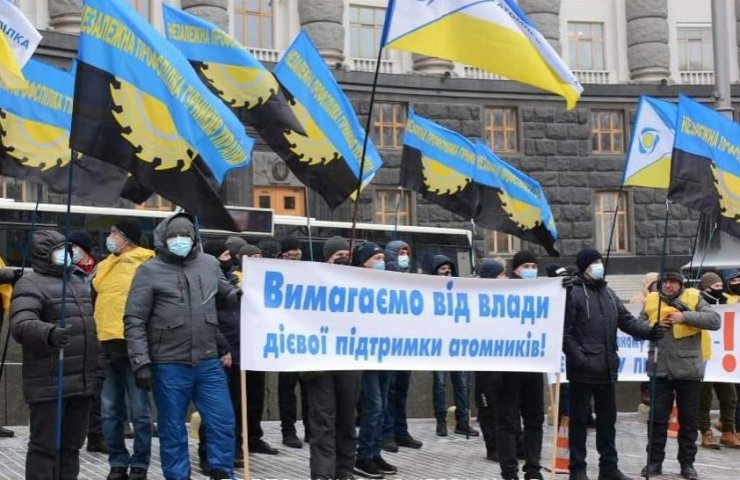 The Independent Trade Union of Miners of Ukraine (NPGU) warns of a possible power outage at the country's uranium mines from April 1.

"De-energizing from April 1, 2021 of uranium mines of SE" VostGOK "due to debts to electricity suppliers, may lead to flooding of mines and contamination of groundwater with radioactive substances, will have irreversible consequences both for Ukraine as a whole and for the whole world , because it will lead to contamination of the drinking layer of water, chernozems, air with radiation, "says union report on Facebook.

According to the trade union, representatives of the 5000th labor collective of SE VostGOK demand an urgent convocation of a meeting with the participation of the Prime Minister, the leadership of the Ministry of Energy, the administration of SE VostGOK, SE NAEK Energoatom and trade unions.

The head of the NPGU, People's Deputy of Ukraine Mykhailo Volynets, together with other People's Deputies, sent the corresponding appeal to the President of Ukraine, Prime Minister, acting Minister of Energy with a warning about the consequences of the authorities' irresponsible attitude towards uranium mining.

"The labor collective of SE" VostGOK "reserves the right to take more radical actions within the framework of the current legislation in order to protect their legitimate rights and interests, including holding a protest to preserve and fully operate the uranium mining enterprise, employs 5,000 Ukrainians and works to ensure energy independence and security of the country, ”the union warned.

VostGOK is one of the ten largest uranium producers (2% of world production) and is the only enterprise in Ukraine that ensures the extraction of uranium ore and the production of natural uranium concentrate. The enterprise provides up to 40% of uranium needs of Ukrainian nuclear power plants. The plant has production sites in Dnepropetrovsk and Kirovograd regions, three uranium mines, three factories, about 20 auxiliary divisions. All this makes it possible to provide a full cycle of operations for the extraction and processing of uranium ore.

Recommended:
Dnipro Metallurgical Combine to be auctioned off on June 26 via internet auction
Interpipe specialists licensed a workshop in the UAE for threading premium pipes
Ukrainian metallurgists demand from the authorities to introduce a ban on the export of scrap metal for 3 years
On this topic
The protest action of the workers of the VostGOK uranium mining mines will continue around the clock
Workers of uranium mines in Ukraine threaten to block four routes on Monday
Trade unions threaten the Ukrainian authorities with an all-Ukrainian strike of miners
Uranium problems: Ukraine may lose its own production
KZhRK miners' strike threatens with loss of sales markets without prospects of their return
Pavlisin: Energoatom may face a shortage of funds for payment of taxes and salaries
Partner news
Сomments
Add a comment
Сomments (0)
News Analytics
Gazprom cuts gas pumping into underground storage facilities in Europe and01-08-2021, 21:54
ArcelorMittal Kryvyi Rih will raise salaries by 10% in two stages if it31-07-2021, 21:03
SE "Antonov" in Canada will build a completely new aircraft - the statement of31-07-2021, 21:11
National Bank of Ukraine predicts economic growth in 2021 by 3.8%29-07-2021, 23:32
"Electrotyazhmash" shipped the stator housing of the hydrogenerator to the29-07-2021, 18:00
Global gold supply to grow by 3.6% in 202131-07-2021, 21:12
Steel raw materials prices decline in all regional markets27-07-2021, 11:57
On the regional markets of metallurgical products, prices are balancing in a22-07-2021, 16:22
Demand for armaments will ensure a stable growth of armored steel sales by 4%20-07-2021, 10:10
Protectionist Measures Support European Steel Prices Despite Summer Lull19-07-2021, 11:02