Elon Musk is initiating a return to Tesla roots with the event - and wants to showcase the taillights again with the new Model S Plaid to competitors. 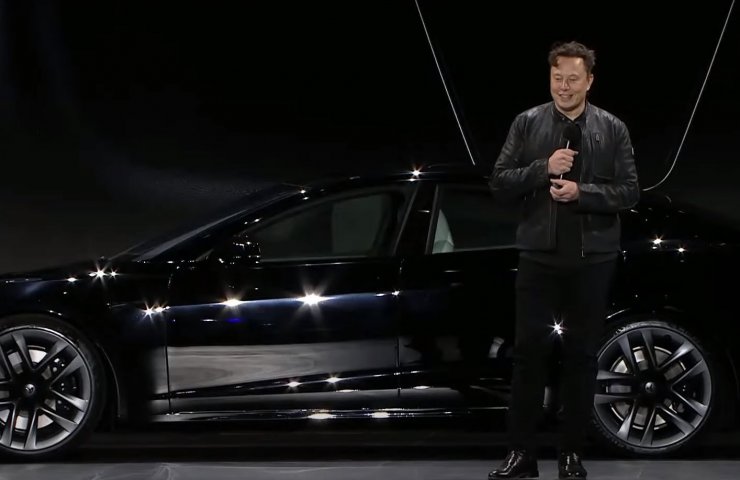 The official presentation of the fastest version of the Tesla Model S electric car in the Plaid specification made it possible to understand what changes the car has undergone, and not all of them are aimed only at improving speed characteristics. The EV gets a new interior, a more efficient powertrain with increased charging speeds, and an on-board entertainment system that rivals game consoles.

The leather jacket in which Tesla boss Elon Musk presented S Plaid has a rectangular patch on the back. White rays on a black background. They should symbolize the view from the windshield of a spacecraft accelerating to the speed of light. An allusion to the movie "Space Balls", which director Mel Brooks parodied the "Star Wars" series of 1987 films. And a symbol of the hope Tesla has for the new model.

“Basically, we stole our product plan from the space balls,” Musk says onstage in front of his Fremont, California, facility. There, the first buyers are already waiting to be allowed to leave the farm with the first production models. Shortly before launch, Tesla raised the price of the S Plaid from the planned $ 130,000 to $ 140,000.

In the movie, Darth Vader's spaceship switches to Incredible Speed, absurd speed, to catch up with the heroic rebels. But they escape, accelerating to Plaid-speed: so fast that the starry sky in front of their spaceship looks like a "plaid" tartan pattern known from kilts.

Musk goes back to the roots of Tesla with his pop culture nods: the new S Plaid with 1,020 hp. shows a record acceleration of less than two seconds from zero to one hundred kilometers per hour at a Tesla top speed of 320 kilometers per hour.

As Elon Musk explained during the presentation, in order to improve the torque characteristics of electric motors, it was necessary to develop a technology for coating the copper winding of the rotor with carbon fiber. Technically, this task was not the easiest one, since both materials have different coefficients of thermal expansion, so the insulation must have a strong pre-tension. To produce such electric motors, Tesla was forced to develop new equipment used to coat the rotor windings.

At the level of traction batteries, improvements in the Tesla Model S Plaid are also provided, but this was not given due attention at the presentation. The drag coefficient of the body has been reduced to 0.208, the lowest among a production vehicle. Better aerodynamics both save battery life and achieve more impressive speed performance.

The surprise of the presentation was a modified heat pump, which is used for more efficient redistribution of heat energy. Tesla's powerplant generates heat during operation, it can be used to heat the passenger compartment and traction battery in cold weather. The improved heat pump in the Tesla Model S Plaid increases the range by 30% in winter, as well as reduces energy costs for heating the passenger compartment by 50%. The enlarged radiator of the cooling system, among other things, improves the performance of consecutive runs against the clock, since the power plant will cool faster and not lose efficiency.

High-speed charging has also been improved, now the Tesla Model S is capable of replenishing 300 km of energy in fifteen minutes. Shortly before the start of deliveries, the company canceled the release of the more expensive version of the Plaid + with an increased range, and now the electric car of this series can only be purchased in the version with batteries, which provides a range of 624 km without recharging. Tesla will be able to produce 1,000 Model S Plaid cars a week in the next quarter, while production volumes are limited to a few hundred units per week.

A week before the Fremont event, Jerome Gillen, one of Tesla's top managers, left the company.

"This is a big, unexpected loss," said Pierre Ferrague, an analyst at New Street Research after Guillen left Bloomberg. The Frenchman made a career in the Daimler Trucks division and rose to head of innovation under Dieter Zetsche when he switched to the launch of a California electric vehicle in the fall of 2010. Tesla just bought the Fremont plant from Toyota to start mass production of the first Model S in two years.

Elon Musk sees himself far ahead of the competition with the S Plaid, claiming that his car is faster than any Porsche and safer than any Volvo. Why are we building this ultra-fast car? Musk asks rhetorically. “For the future of sustainable energy, it is important to show that the electric car is the best car.”

Финансовая аналитика, прогнозы цен на сталь, железную руду, уголь и другие сырьевые товары. More news and analytics on Metallurgprom telegram channel - subscribe to get up-to-date market information and price forecasts faster than others.
Сomments
Add a comment
Сomments (0)
On this topic
On June 3, Tesla will start selling an electric car that can accelerate to 100 km /h in less than 2
2021 will be the year of rapid development of private astronautics
Virgin Galactic unveils polished stainless steel spaceplane
Elon Musk introduced Tesla electric pickup Cybertruck at a price of 40 thousand dollars
Strategy of defense in space
Elon Musk contracted coronavirus, but doubts the reliability of the tests
Recommended:
London Metal Exchange for the first time in history banned trading for ethical reasons
Ferroalloy enterprises of Ukraine in total reduced output by 27.6%
Stopped Zaporizhzhya NPP will not resume operation until the shelling stops
News Analytics
EBRD downgrades Ukrainian economic growth forecast for 2023 from 25% to 8%28-09-2022, 13:57
EU plans additional sanctions against Russian metallurgy27-09-2022, 10:34
The European Commission has approved 5.2 billion euros of state support for27-09-2022, 10:43
China's leading industrial profits fall 2.1% in first 8 months27-09-2022, 10:20
Moody's changed the outlook for the global mining industry to26-09-2022, 19:04
China production cuts in winter will give limited boost to steel markets -15-09-2022, 10:09
Steel prices may rise as manufacturers stop production11-09-2022, 14:06
IREPAS: The global long products market is in a "dramatic situation"10-09-2022, 20:49
Steel prices are unlikely to rise significantly in the near future - analysts02-09-2022, 22:58
Steel prices may move up on new data from China31-08-2022, 12:19
Sign in with: