Siemens specialists conducted an audit of Interpipe as a qualified supplier

The Ukrainian industrial company "Interpipe" announced the successful passage of an audit from the manufacturer of railway transport, the German corporation Siemens. Interpipe will start working on the first direct orders for Siemens this year. 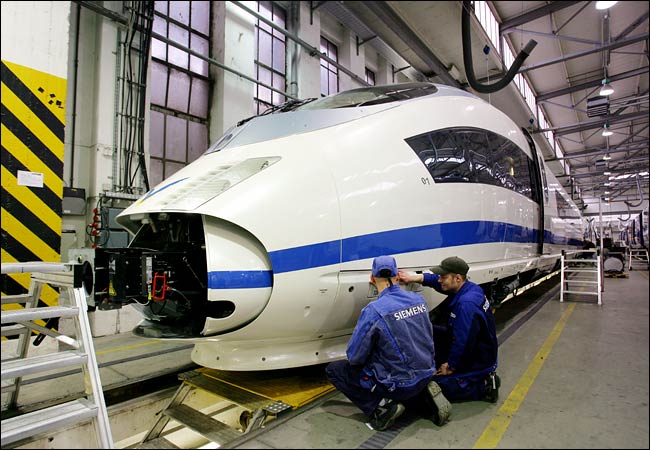 According to the company, this is an important step towards full qualification of Interpipe as a supplier. After passing it, the company will be able to directly supply wheels for the construction and maintenance of a wide range of Siemens railway transport around the world: high-speed passenger trains, electric trains, subway cars, locomotives.

The audit consisted of several stages. The German side studied in detail the entire production technology, from the manufacture of a round billet at the electric steel-making complex "Inteprip Stal" and ending with the machining of the railway wheels themselves. Siemens representatives paid special attention to Interpipe's plans to decarbonize production.

Alexander Garkavy, director of the railway products division of Interpipe:

- We were able to prove that we meet all the most stringent requirements for internal Siemens standards. This is an important step towards the strategic goal of the railway products division - to become a certified supplier for locomotives and passenger rolling stock of one of the largest car builders in Europe. Interpipe will start working on the first direct orders for Siemens this year.

Interpipe is a Ukrainian industrial company, a manufacturer of seamless pipes and railway wheels. The company's products are supplied to more than 80 countries around the world through a network of sales offices located in the key markets of the CIS, the Middle East, North America and Europe. In 2020, Interpipe sold 662 thousand tons of finished products, including 192 thousand tons of railway metal products.

Финансовая аналитика, прогнозы цен на сталь, железную руду, уголь и другие сырьевые товары. More news and analytics on Metallurgprom telegram channel - subscribe to get up-to-date market information and price forecasts faster than others.
Сomments
Add a comment
Сomments (0)
On this topic
German high-speed trains will ride on Ukrainian wheels
Ukrainian railway wheels will be used in the Amsterdam metro
Interpipe expands the supply of railroad metal products to the North American region
Ukrzaliznytsia plans to purchase Swiss trains Stadler FLIRT by the end of 2022
INTERPIPE has improved its financial results for the 12 months 2019
Interpipe has mastered a new type of railway wheels for Deutsche Bahn passenger trains
Recommended:
Fitch Ratings downgrades Ukrzaliznytsia's credit rating amid downgrading of Ukraine's sovereign rating
Tesla sells off most of its bitcoin holdings
Ukrainian gas transportation system allowed to pump biomethane
News Analytics
India prepares to lift export duties on steel09-08-2022, 08:34
Russian metallurgists will need more than 10 years to replace imports of key09-08-2022, 07:23
China reduced steel exports in July by one million tons or 12%08-08-2022, 17:41
World steel prices have moved from a protracted fall to growth08-08-2022, 16:27
Ferrexpo's net profit in the first half of the year decreased by 88%03-08-2022, 10:20
The US market may begin a collapse in prices for thick sheet14-07-2022, 09:39
High iron ore shortage could halt metallurgy's green transition28-06-2022, 14:02
Price volatility hits global steel market27-06-2022, 19:28
Recovery in China could be key to rising global steel prices - MEPS24-06-2022, 14:00
Conflict in Ukraine spurs Europe's drive for clean energy03-06-2022, 12:14
Sign in with: