The Trade Union of Metallurgists and Miners of Ukraine expressed its gratitude to everyone who contributed to the solution of the issue of timely payment of wages to employees of ArcelorMittal Kryvyi Rih, intended to join the protest action in Kiev, and also actively participated in its organization. 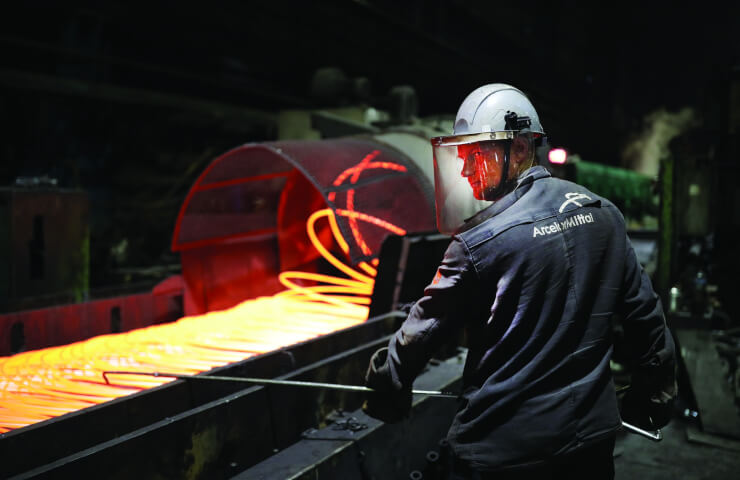 The Shevchenkovsky District Court of Kyiv adopted a resolution lifting the ban on PJSC ArcelorMittal Kryvyi Rih from conducting banking operations to pay wages to employees of the enterprise, as well as to pay taxes and fees (compulsory payments) using a previously arrested account with JSC UkrSibbank ". This was reported in the primary organization of the Trade Union of Metallurgists and Miners of Ukraine (PMGU) PJSC ArcelorMittal Kryvyi Rih.

“As the administration of the enterprise assured, on January 21, employees will receive an advance payment on their salary cards without delay. This was facilitated along with the actions of lawyers, financiers and other specialists of the enterprise, as well as the actions of the PMGU PJSC ArcelorMittal Kryvyi Rih aimed at protecting the rights of workers,” the trade union said in a statement.

Recall that on January 5 of the current year PJSC "ArcelorMittal Kryvyi Rih" principa-verhovenstva-prava-v-ukraine.html">reported about the blocking of their bank accounts by order of the Office of the Prosecutor General of Ukraine in accordance with the ruling of the Shevchenkovsky District Court of Kyiv, adopted in November 2021, the reason for which was tax dispute, which concerns the payment by the enterprise of rent for the use of subsoil.

This arrest of the company's funds jeopardized the timely payment of wages to employees. Employees of ArcelorMittal Kryvyi Rih PJSC, members of the trade union, were ready to leave for Kiev and hold a peaceful protest there demanding that the enterprise be given the opportunity to pay wages to its employees on time, about which the Kiev City State Administration was officially notified.

Финансовая аналитика, прогнозы цен на сталь, железную руду, уголь и другие сырьевые товары. More news and analytics on Metallurgprom telegram channel - subscribe to get up-to-date market information and price forecasts faster than others.
Сomments
Add a comment
Сomments (0)
On this topic
ArcelorMittal Kryvyi Rih will pay additional remuneration to its workers
Metallurgists of Ukraine require the government to withdraw the draft law "On labour"
ArcelorMittal Kryvyi Rih will raise salaries by 10% in two stages if it receives the consent of the
The largest steel producer announced the complete destruction of the rule of law in Ukraine
KZhRK miners' strike threatens with loss of sales markets without prospects of their return
ArcelorMittal Kryvyi Rih raises wages by 10% or more from October 1, 2021
Recommended:
BIR: European Commission's decision on scrap metal will be the most tragic event in the last 40 years
The United States banned the sale of knives and refrigerators to Russia
Explosion at Tata Steel plant in India at coke battery
News Analytics
The largest producer of titanium raw materials in Ukraine OGCC will sell25-05-2022, 20:48
Glencore accused of bribery in London pleads guilty in the US25-05-2022, 10:44
Swiss oil and gas equipment manufacturer Sulzer leaves Russia24-05-2022, 13:08
BIR: European Commission's decision on scrap metal will be the most tragic24-05-2022, 11:41
Rejection of Russian palladium destroys markets24-05-2022, 11:41
US steel market sentiment becomes more price neutral05-05-2022, 10:15
The global high-strength steel market will grow steadily by 5% annually for the04-05-2022, 08:45
China steel inventories hit 13-month high amid COVID-19 outbreak30-04-2022, 16:38
Slowdown in global auto sector affects steel prices27-04-2022, 12:36
World alumina production reaches a record 138 million tons21-04-2022, 09:54
Sign in with: