The plant in Kamenskoye is fully provided with orders and operates with a full load of metallurgical capacities. However, in the coming days, he plans to stop one of the three blast furnaces for a scheduled overhaul. 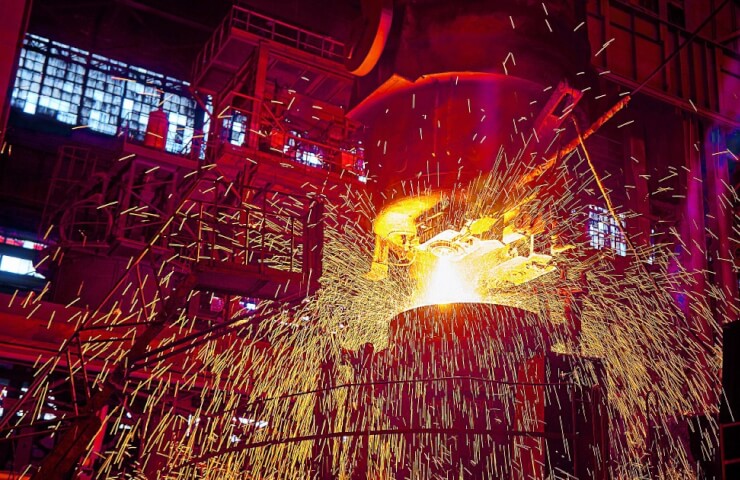 Metallurgical enterprise "Kametstal" of the Netherlands mining and metallurgical holding Metinvest B.V. (Metinvest), created at the facilities of the Dneprovsky Metallurgical Plant (DMK, Kamenskoye, Dnepropetrovsk region), continues to work at full capacity. This was told by the general director of the plant Dmitry Lippa in an interview with the TV channel "Ukraine 24".

“We are provided with orders, there are problems with logistics, but we are solving them. We plan to carry out a major overhaul of one of the units - today we will stop it as planned. We planned back in April, but decided to release more products,” he said, adding that after 2.5 months of war, the company was able to stabilize the situation.

According to Interfax-Ukraine, a source at the enterprise told Interfax-Ukraine that one of the three blast furnaces is being stopped for major repairs of the first category. “The shutdown of the unit will be long,” said the source of the agency, without specifying the possible timing of the decommissioning of the furnace.

The main shareholders of Metinvest are Rinat Akhmetov's SCM Group (71.24%) and Vadim Novinsky's Smart Holding (23.76%), who jointly manage the company.

Финансовая аналитика, прогнозы цен на сталь, железную руду, уголь и другие сырьевые товары. More news and analytics on Metallurgprom telegram channel - subscribe to get up-to-date market information and price forecasts faster than others.
Сomments
Add a comment
Сomments (0)
On this topic
Steel production in Ukraine in March fell by a third year-on-year
The Dnieper metallurgical plant restarts steelmaking
Metinvest is ready to pay more than 9 billion hryvnia for the Dnieper steel plant
Dnipro Metallurgical Plant exceeded the November production plan by 15%
Immediately after the sale of the Dnieper Steel Works, an environmental audit will come to the plant
Dnipro Metallurgical Plant claims that Rinat Akhmetov is not on the list of its shareholders
Recommended:
Alisher Usmanov's Metalloinvest postponed the expansion of rebar production in the UAE
An Australian company has signed a contract with the US Department of Defense for the production of rare earth elements
The largest steel company in Austria announced its readiness to stop gas supplies from Russia
News Analytics
The United States refused to impose duties on Russian metals and increase02-07-2022, 09:05
Daimler Truck began testing Actros tractor on liquid hydrogen02-07-2022, 08:54
Volvo invests $1.25 billion to build electric vehicle plant in Slovakia01-07-2022, 18:17
Swedish court authorizes construction of steel mill for the first time in 5001-07-2022, 11:09
AvtoVAZ plans to produce at least 400,000 vehicles in 202301-07-2022, 11:29
High iron ore shortage could halt metallurgy's green transition28-06-2022, 14:02
Price volatility hits global steel market27-06-2022, 19:28
Recovery in China could be key to rising global steel prices - MEPS24-06-2022, 14:00
Conflict in Ukraine spurs Europe's drive for clean energy03-06-2022, 12:14
US steel market sentiment becomes more price neutral05-05-2022, 10:15
Sign in with: