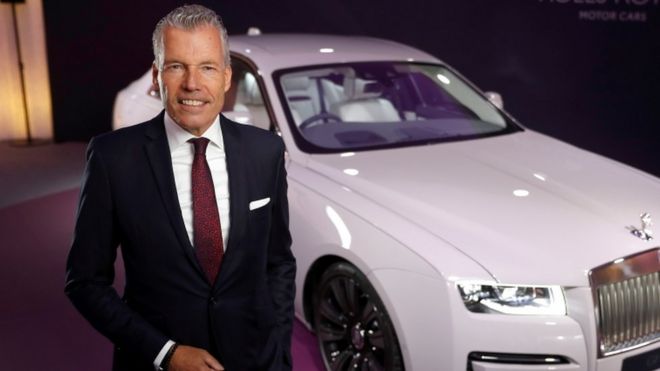 The head of the British auto maker Rolls-Royce said global demand for luxury cars is recovering despite the pandemic. Thorsten Müller-Otesch told the BBC that markets in Asia, Europe and the US are now "more or less back to normal."

Reporters posed their questions to the head of Rolls-Royce at the launch of the new Ghost, the company's latest model, which is expected to cost around £ 250,000.

In the midst of the coronavirus pandemic, Rolls-Royce shut down production entirely for a couple of weeks, while its dealers around the world did the same.

The head of Rolls-Royce dismissed suggestions that the automaker is overly dependent on one region for its sales, saying they are “well balanced globally.

While the US is the largest market for Rolls-Royce and China also plays an important role, he said there is strong demand in countries such as the UK, which accounts for 10% of sales.

Recommended:
The Ministry of Energy of Ukraine announced 50 million hryvnias of "illegal expenses" at the Nadezhda mine
President of Ukraine Volodymyr Zelensky visited ArcelorMittal Kryvyi Rih for the first time
Chinese company DEIC will build a new power unit at the Slavyanskaya TPP
On this topic
How the reform of the electricity market in Ukraine can lead to a collapse and what to do about it
Rolls-Royce announces massive layoffs due to Covid-19 pandemic
Rolls-Royce will begin to produce household mini nuclear reactors by 2029
The Chinese company will buy British Steel in the coming days: every day of delay costs 1 million
The owner of the Turkish Erdemir is ready to invest a billion pounds in the future of British Steel
British metallurgy will lose about 5 percent of revenues annually due to Brexit
Add a comment
Сomments (0)
News Analytics
Indian state steel company to sell non-core assets19-09-2020, 18:50
Largest US steel company to lose $ 100 million in Q319-09-2020, 18:50
UN experts believe that the worst-case scenario for the Ukrainian economy can19-09-2020, 18:47
KZhRK miners' strike threatens with loss of sales markets without prospects of16-09-2020, 21:51
Privatization of the alcohol industry has started in Ukraine16-09-2020, 14:56
Iron ore prices to surpass six-year high soon16-09-2020, 10:32
World Oil Demand Peak May Be Over - BP15-09-2020, 09:05
China expands car market capacity by increasing demand for steel and metals11-09-2020, 10:56
Prices continue to rise in the long and flat steel markets08-09-2020, 14:25
Difference between ferrous and non-ferrous metal28-08-2020, 13:45
Sign in with: