The monument to the builder of communism, the first People's Commissar of Industry of the USSR Sergo Ordzhonikidze, which stood opposite the main administrative building of Azovstal, was dismantled in April 2016. 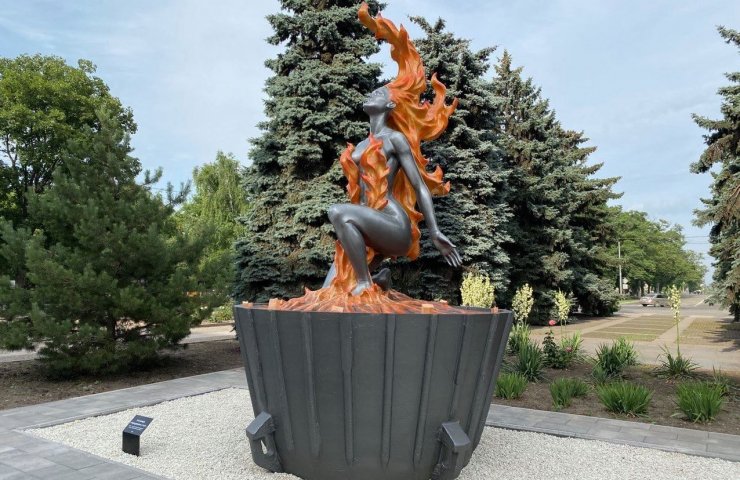 On the site of the monument to the first People's Commissar of Industry of the USSR Sergo Ordzhonikidze, dismantled in 2016 as part of the decommunization, opposite the main administrative building of Azovstal, an installation titled "The Birth of Steel" appeared. A female figure engulfed in the flames of the liquid steel of a converter ladle, according to the director general of the Azovstal metallurgical plant of the Dutch mining and metallurgical company Metinvest B.V. (Metinvest) Enevera Tskitishvili will be a gift to all Ukrainians, Mariupol residents and employees of the company for the 15th anniversary of Metinvest and the 30th anniversary of Ukraine's independence.

“Therefore, we decided to make a gift to all Ukrainians, Mariupol citizens and employees of the company on the eve of the Day of Metallurgist and Miner by these significant dates. Another modern installation appeared at the entrance to the plant's management. It symbolizes the sacrament “Birth of Steel” and bears that name. Since its inception and throughout its history, our country, the company and the plant follow the same path of development, become hardened, become stronger. But at the same time they retain their originality, pristine beauty and uniqueness. In the hands of people of the fiery profession, steel is born from the ore mined from the depths of our earth - the basis for the creation of beautiful structures. Let this wonderful symbol inspire us to new achievements that strengthen the power and prosperity of our country, ”E. Tskitishvili wrote on his Facebook page.

Финансовая аналитика, прогнозы цен на сталь, железную руду, уголь и другие сырьевые товары. More news and analytics on Metallurgprom telegram channel - subscribe to get up-to-date market information and price forecasts faster than others.
Сomments
Add a comment
Сomments (0)
On this topic
Ukraine has set a national record for pulling a dump truck
At Azovstal reduced the time of diagnosis of the lining of the Converter four times
At the plant named after Illich in Mariupol completed the repair of blast furnace and Converter
Metinvest cuts blast furnaces at the Azovstal metallurgical plant for scrap
Metinvest Group completed the reconstruction of the right side of the city pier in Mariupol
Metinvest announced plans for mass layoffs
Recommended:
Dneprovsky Metallurgical Plant received almost UAH 2 billion in net profit last year
The owner of the Dnipro iron and steel works commented on reports of absentee arrest in the Russian Federation
Ukraine delivered 86,000 tons of iron ore to Turkey in September - TUIK
News Analytics
Australia and the UK aim to catch up and overtake China in the battery metal26-11-2022, 22:37
The United States imposed a ban on the import and sale of equipment from26-11-2022, 22:31
The pipe metallurgical plant in Nikopol continued to work after a short stop26-11-2022, 22:52
The state will not support the export of metals from Russia - Ministry of25-11-2022, 13:18
ArcelorMittal Kryvyi Rih suspends production due to shelling of energy25-11-2022, 12:04
Platinum market to face shortage next year - WPIC22-11-2022, 18:25
Global steel demand falls and will fall by 2.3% in 2022: WorldSteel19-10-2022, 23:12
Iron ore prices fall to 11-month low15-10-2022, 10:36
China production cuts in winter will give limited boost to steel markets -15-09-2022, 10:09
Steel prices may rise as manufacturers stop production11-09-2022, 14:06
Sign in with: