For the first time in Ukraine, a passenger car running on hydrogen was certified

A car of the Japanese Toyota brand with a hydrogen engine was delivered to Ukraine and certified for the first time by Alexander Repkin, President of the Ukrainian Hydrogen Council Energy Association. 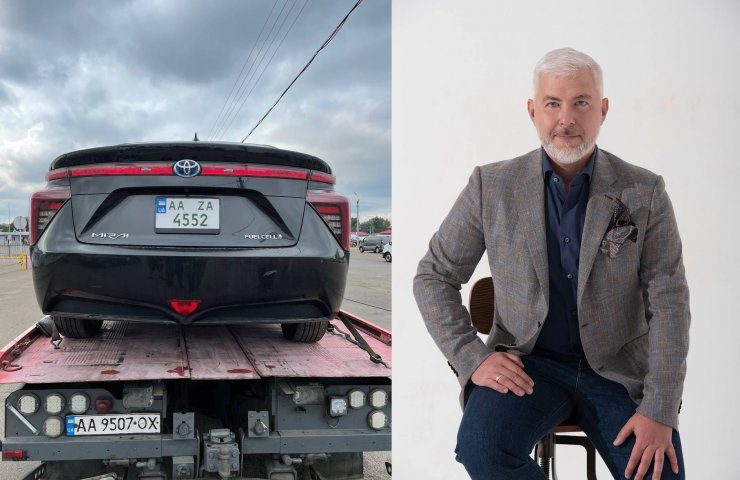 Hydrogen is a new environmentally friendly fuel for cars, trains and airplanes. It does not lead to harmful emissions, which accelerate the process of global warming. This is assured by Alexander Repkin, who heads the Ukrainian Hydrogen Council. It was he who certified the first hydrogen car in Ukraine - now such a car has Ukrainian numbers.

The plans for the coming years are the development of infrastructure for hydrogen transport. Among the first steps is the certification of another car and the creation of the first hydrogen filling station in Ukraine. In the meantime, the car will be refueled in neighboring Poland. According to Repkin, hydrogen cars will soon become as commonplace as electric cars.

“Bringing a car here in transit does not mean leaving it in Ukraine,” says Alexander. - Our car will drive on Ukrainian roads, and therefore the car has already passed the appropriate certification and received Ukrainian numbers. The process was complicated, and not everyone would decide on it, since this is a personal investment, and the risk of not being certified is great. It took us a month and a half to do this - the car had to be properly classified in order for it to meet current safety standards. But it was difficult only because this is the first certification. Now, everyone who wishes to clear customs for a hydrogen car will only take three days to complete it. ”

One of the leading countries in the field of hydrogen energy is Japan, which even made the current Olympic Games as environmentally friendly as possible thanks to hydrogen. Therefore, it is not surprising that the first Ukrainian hydrogen machine is made in Japan.

The global goal of the Ukrainian Hydrogen Council and all those working on the hydrogen strategy is to make Ukraine the main exporter of hydrogen for the EU countries due to the good potential of renewable energy sources.

Финансовая аналитика, прогнозы цен на сталь, железную руду, уголь и другие сырьевые товары. More news and analytics on Metallurgprom telegram channel - subscribe to get up-to-date market information and price forecasts faster than others.
Сomments
Add a comment
Сomments (0)
On this topic
"Naftogaz" has filed a lawsuit against the government of Ukraine for the issuance of a
The operator of the gas transport system of Ukraine has concluded agreements with all connecting
Time magazine named ecoactivists Greta Thunberg's man of the year
Tata Steel joined the project of construction of European hyperloop
Energomashspetsstal successfully passed General Electric qualification
American Westinghouse Electric will build a nuclear reactor of the AP1000 project in Ukraine
Recommended:
H2 Green Steel has received 190 million euros for the construction of a hydrogen steel plant
European stainless steel plants close due to energy crisis
China ramps up investment in transport to bolster economy
News Analytics
The production of passenger cars in Russia decreased by 2.8 times in eight29-09-2022, 11:19
Donetsk and Torez electrotechnical plants will start producing electrical29-09-2022, 11:37
Ukrainian coking plants reduced gross coke production by 55.2%29-09-2022, 11:28
China ramps up investment in transport to bolster economy29-09-2022, 11:33
The heads of mining companies named the main risks for business29-09-2022, 10:03
China production cuts in winter will give limited boost to steel markets -15-09-2022, 10:09
Steel prices may rise as manufacturers stop production11-09-2022, 14:06
IREPAS: The global long products market is in a "dramatic situation"10-09-2022, 20:49
Steel prices are unlikely to rise significantly in the near future - analysts02-09-2022, 22:58
Steel prices may move up on new data from China31-08-2022, 12:19
Sign in with: