The problem is that US steel production capacity is growing two to three times faster than demand is growing. "If you are going to increase new capacity, you will compete for market share, and for this you will have to lower the price," - they say in UBS. 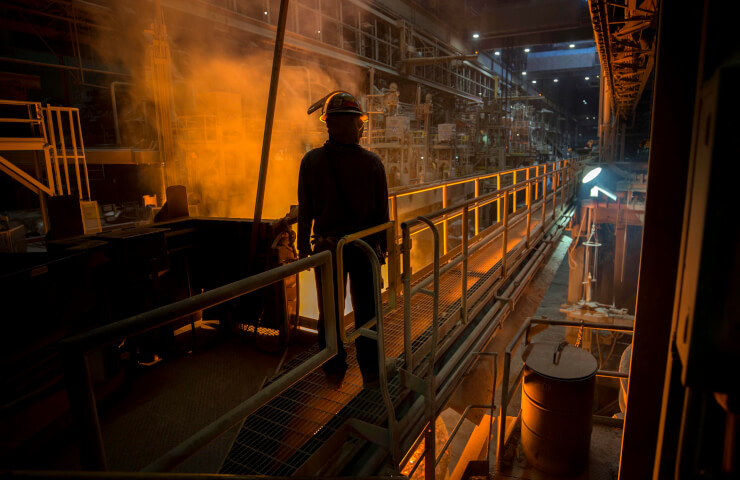 Analysts say U.S. steel prices are unlikely to return to last year's highs over the next year due to incoming steel capacity and falling raw material prices, which could affect steel mill profitability.

"I don't think we'll see steel prices rise to levels we've seen in the recent past," said Wen Li, senior metals and mining analyst at CreditSights. “Data points to downside risk. You have potential to connect to the network and weaker demand.”

“There are more opportunities emerging in the United States and also in other countries,” said Terry Ryan, managing director of Carl Marks Advisors. “This is a natural progression in a market where the more capacity comes online, the more likely prices are to normalize.”

Andreas Bockenhäuser, equity analyst at UBS, agreed that supply growth could outpace demand, which in turn would lead to lower prices for hot rolled coil and then stabilize.

“The problem is that capacity is growing two to three times faster than demand is growing. If you are going to add new capacity, you will be competing for market share, and for this you will have to lower the price,” said Bockenhäuser.

US flats producers North Star BlueScope, Steel Dynamics Inc (SDI) and Nucor Gallatin have a combined production capacity of more than 9 million short tons, which are or should be commissioned before the end of this year. As the U.S. continues to transition to electric furnaces, some of the commissioning capacity could be seen as simply replacing blast furnaces that have been idle indefinitely, so it's unlikely to drive prices down, other analysts said.

The increase in steel production comes amid a series of plant shutdowns scheduled for this fall, which together could lead to a reduction in US steel production of about 600,000-800,000 tons.

“The shutdowns will contribute to a seasonal recovery in demand that will improve from current levels in the coming months,” said Fastmarkets analyst Paolo Frediani. “The shutdowns will not be enough to fundamentally change the balance of supply and demand. Our analysis suggests that the price recovery expected in the near future will be modest.”

The shutdowns will support a seasonal recovery in demand that will improve from current levels in the coming months.

“Maintenance shutdowns are likely not enough to make up for weakness in demand, while steadily falling import prices could also offset lower domestic supply in the coming months. Thus, we do not think that maintenance stops are of great importance at the moment, in particular when the stocks in the service centers are still sufficient,” added Bockenhäuser.

The fall in the cost of raw materials may also contribute to the fall in prices for hot-rolled coils, analysts say.

The flat steel market is forecast to resume its downward trend next year due to factors such as scrap metal prices "holding well below recent peaks" and "competitive import prices as steel markets trend down around the world due to weaker demand and lower raw material costs,” Frediani added.

“If you are bearish on iron ore and metallurgical coal prices – which we are – steel prices should fall with them, and this is what we are seeing in six, 12, 36 months. In this scenario, U.S. steel prices will return to mid-cycle levels, at least in the $30-$35/cwt range,” he said.

The Chinese hot-rolled steel market is under pressure due to a lack of market confidence and persistent weakness in end-user demand, as well as lower raw material prices.

"You're seeing prices rebounding from these all-time highs, and as those prices continue to fall, you're going to see some of the profitability issues that major players have experienced over the past six quarters," Ryan said.

After many calls from major steel producers in July on Q2 earnings and losses, top managers acknowledged the fall in steel prices and

Финансовая аналитика, прогнозы цен на сталь, железную руду, уголь и другие сырьевые товары. More news and analytics on Metallurgprom telegram channel - subscribe to get up-to-date market information and price forecasts faster than others.
Сomments
Add a comment
Сomments (0)
On this topic
Platts: Real steel demand in China will fall by 36% in the first quarter
War returns to Europe. How will it affect the regional market of metallurgical raw materials?
World Steel Association defines green steel and its variations
Analysts note overheating of the global scrap metal market
War returns to Europe. How will this affect steel supply?
China's steel sector can only rely on the real estate sector
Recommended:
The owner of the Dnipro iron and steel works commented on reports of absentee arrest in the Russian Federation
The state will not support the export of metals from Russia - Ministry of Industry and Trade of the Russian Federation
"Centravis" agreed to supply a new batch of seamless pipes to a client from Oman
News Analytics
Analysts predict 5% annual growth in the iron casting market through 203006-12-2022, 12:44
Oman to build a new steel plant worth $3 billion in 3 years06-12-2022, 12:14
Tesla's Shanghai gigafactory set a new record for electric vehicle shipments in05-12-2022, 15:24
Sanjeev Gupta may lose control of his steel plants in Belgium05-12-2022, 13:55
Steel demand and weather in Australia will affect coking coal prices05-12-2022, 13:16
Analysts predict 5% annual growth in the iron casting market through 203006-12-2022, 12:44
Commodity prices will fall, metals quotes will rise slightly - Focus Economics28-11-2022, 13:28
Platinum market to face shortage next year - WPIC22-11-2022, 18:25
Global steel demand falls and will fall by 2.3% in 2022: WorldSteel19-10-2022, 23:12
Iron ore prices fall to 11-month low15-10-2022, 10:36
Sign in with: