Elon Musk, who is currently awaiting the opening of the first European Tesla Gigafactory in Grünheide, near Berlin, attended the Volkswagen top management meeting 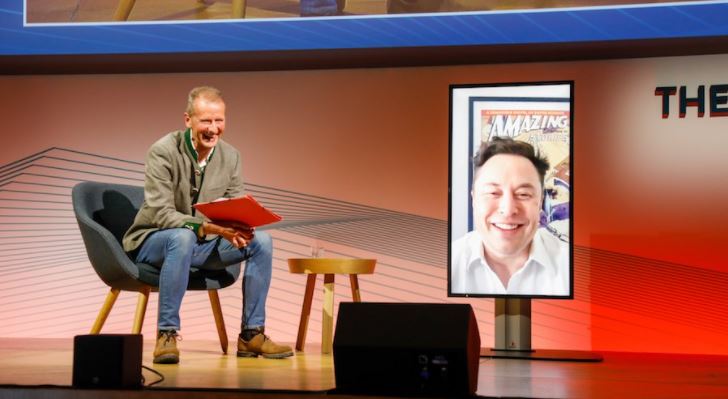 Volkswagen CEO Herbert Diess told workers to prepare for American electric vehicle maker Tesla to start ramping up production at its first European plant outside of Berlin next year.

The CEO is pushing to accelerate plans for a fundamental transformation of the company to prepare for the era of autonomous electric vehicles.

Addressing thousands of VW workers in Wolfsburg, Diess told them they needed to make the company “future-proof.”

Tesla at its Grünheide plant is aiming for a production time of just 10 hours per car, Diess said. VW's main EV plant in Zwickau currently requires more than 30 hours per vehicle, and should drop to 20 hours next year.

The CEO said the next VW Golf, the company's best-seller, shouldn't be made by Tesla or in China. "The next icon on the market should be made in Wolfsburg, VW's hometown," Diess tweeted.

The lack of chips has forced VW to cut production in Wolfsburg to its lowest level in nearly 70 years.

The slowdown resulted in the delivery of 122,100 all-electric vehicles, including a small number of commercial vehicles, in the third quarter of 2021. Tesla produced 241,300 units over the same period.

VW, which owns Porsche, Audi, Skoda and SEAT, sold 231,600 battery-powered electric vehicles in 2020. That's less than half of Tesla's sales, but that's 214% more than the previous year. Rapid growth is expected to continue as Volkswagen launches 70 electric vehicles and opens six battery factories in Europe by the end of the decade.

The automaker's substantial investment in electric vehicles - € 35 billion ($ 41.7 billion) by 2025 - is focused on battery technology and further recycling as infrastructure for charging and recycling used batteries.

Plans for both VW and Tesla could be thwarted by expected shortages of metals for batteries, namely nickel and lithium.

Musk expressed concern over nickel supplies. Last year, he pleaded with miners to produce more nickel, promising a "giant contract" to supply it efficiently and in an "environmentally friendly manner."

Last month, the electric vehicle giant signed a multi-year nickel supply agreement with New Caledonian-based Prony Resources. The contract guarantees the company about 42,000 tons of metal needed to make the batteries that power its electric vehicles.

Tesla also has a similar agreement with BHP.

VW is reportedly in talks with suppliers to ensure direct access to raw materials.

Финансовая аналитика, прогнозы цен на сталь, железную руду, уголь и другие сырьевые товары. More news and analytics on Metallurgprom telegram channel - subscribe to get up-to-date market information and price forecasts faster than others.
Сomments
Add a comment
Сomments (0)
On this topic
Tesla in Germany faced problems and it is unclear when it will be able to launch its
Volkswagen launched the production of electric vehicles costing less than 30,000 euros
Chip shortage reduced Volkswagen car production by 100,000
Volkswagen invests 27 billion euros in self-driving cars
Honda announced the start of mass production of autonomous cars of the third level
General Motors and Volkswagen go all-in on electric vehicles
Recommended:
London will violate WTO rules in an attempt to prevent the flow of cheap steel imports
The United States imposed sanctions against the chairman of Severstal Alexei Mordashov
Rusal filed a claim for a 20% refund in the Queensland Alumina alumina refinery of the Rio Tinto concern
News Analytics
The Belarusian steel plant was visited by the Ambassador of Kazakhstan to06-07-2022, 17:44
US steel prices fall to December 2020 levels06-07-2022, 13:40
Interpipe mastered a new type of railway wheels for the EU market06-07-2022, 12:15
Tesla in the second quarter reduced the supply of cars by 18%04-07-2022, 10:24
Steel prices fall due to weakening European demand and problems in China04-07-2022, 10:40
High iron ore shortage could halt metallurgy's green transition28-06-2022, 14:02
Price volatility hits global steel market27-06-2022, 19:28
Recovery in China could be key to rising global steel prices - MEPS24-06-2022, 14:00
Conflict in Ukraine spurs Europe's drive for clean energy03-06-2022, 12:14
US steel market sentiment becomes more price neutral05-05-2022, 10:15
Sign in with: