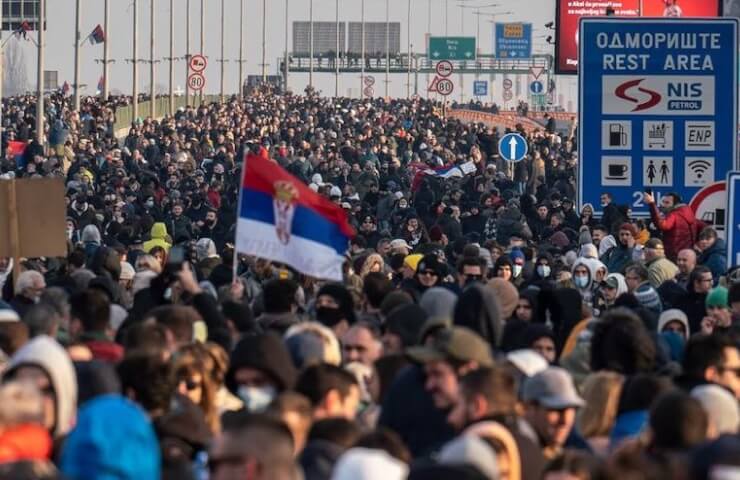 Thousands of demonstrators blocked major roads across Serbia over the weekend as outrage intensified over two new laws that open up opportunities for foreign companies to mine the country's resources.

Demonstrators protested against the Rio Tinto Jadar lithium project and the recently opened Cukaru Peki Zijin Mining copper and gold mine, which environmentalists say will pollute land and water in the Balkan countries.

Protestants held banners with the words: "Stop investors, save nature, we do not abandon nature in Serbia" and chanted: "Rio Tinto, get away from the Drina River!" Activists also gathered in Berlin, New York and at Rio Tinto's headquarters in London.

Serbian tennis player Novak Djokovic shared a photo of the protest on Instagram and commented: "Clean air, water and food are the keys to health." “Without this, every word about 'health' would be out of date,” wrote Djokovic.

The Jadar mine, discovered by geologists at Rio Tinto in 2004, is one of the largest new lithium projects under development. It has the potential to produce about 58,000 tonnes of battery-grade lithium carbonate per year.

Rio Tinto estimates that the promised expansion in supply and capacity increases will drive demand growth by about 15% between 2020 and 2050. The remaining 85% should come from new projects.

The Rio project, located in western Serbia, will produce enough lithium to produce one million electric vehicles. It will also produce boric acid, used in ceramics and batteries, and sodium sulfate, used in detergents.

Construction of the mine is expected to commence early next year, subject to environmental permits, with first production in 2026.

When commissioned, the Jadar mine will supply metal primarily to the European market, one of the world's largest emerging markets for electric vehicles.

In just three years, UK carmakers will have to purchase batteries for local electric vehicles, as mandated by the 2020 Brexit Free Trade Agreement.

According to the agreement, all European trade in cars and parts will continue to be free of tariffs or quotas after the end of the transition period for Brexit on December 31, if they contain enough content from UK or EU factories.

Batteries will initially be allowed to contain up to 70% materials from countries outside the EU. From 2024, this requirement will be tightened to 50%.

Currently, large factories for the production of battery cells are being built in the EU. European Commission Vice President Maros Sefkovic said the planned facilities will produce cells to power at least six million electric vehicles by 2025.

Over the past five years, the miner has tried to expand its presence in the battery market. Rio reportedly attempted to buy a stake in the Chilean Chemical and Mining Society (SQM), the world's second largest lithium producer, for $ 5 billion in 2018.

In April of this year, it began producing lithium from waste rock at a demonstration plant located in a borate mine in California.

Rio has invested $ 10 million to build a pilot plant that will be able to produce 10 tons of lithium carbonate per year. By the end of the year, based on the test results, it will be decided whether to spend another $ 50 million on an industrial plant with an annual capacity of 5,000 tons per year - enough for approximately 15,000 Tesla Model S batteries.

According to the US Geological Survey, production projections will be roughly the same as Albemarle's Silver Peak mine in Nevada, which is currently the country's only lithium carbonate asset.

The Serbian government expects the country's booming mining sector to start generating 4% to 5% of its total GDP in less than 10 years, a significant increase from the current 2%.