UK will face shortage of fresh food in the coming days

If nothing changes, the British will face a shortage of lettuce, certain types of vegetables, cauliflower, broccoli and citrus fruits in the coming days - all imported from the continent at this time of year. 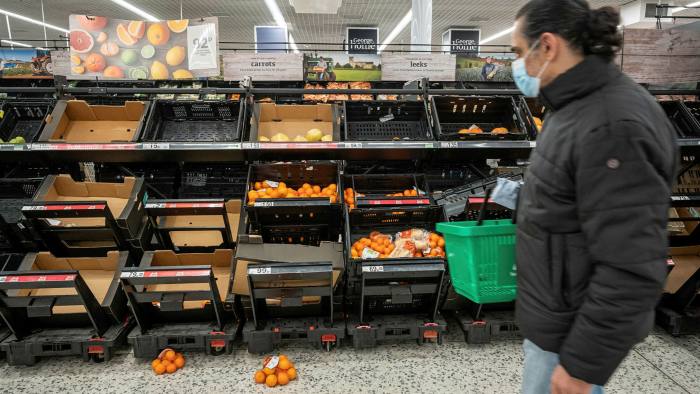 UK supermarkets warned on Monday that stocks of fresh produce such as lettuce, cauliflower and broccoli will be depleted in the coming days if border delays continue, but urged shoppers to avoid panic shopping until Christmas. reported in the Financial Times.

UK chain stores say they are in talks with suppliers to find alternatives, where possible, with some carriers that are diverted to other ports. This also includes importing some products directly from Spain and increasing stocks from Holland.

Supermarkets have called on the government to create green stripes for all fresh produce to reduce the accumulation of perishable food at logistics collection points.

UK retailers have stocked up ahead of Christmas, which should stave off some problems, but if the French border is closed for an extended period, there will be food problems as the UK steps in in the final weeks before its final exit from the EU.

Prime Minister Boris Johnson reported at a special press conference that delays in food supplies affect only about 20% of the total cargo from continental Europe.

He tried to reassure the public about food supply by stating, “British supermarkets say supply chains are strong and reliable.

Previously it was reported that the UK government has recommended stores and supermarkets to stock up on food. However, this warning was made on the basis of possible problems in logistics in the event of a country leaving the European Union without a deal. The closure of borders by neighboring states due to the outbreak of the mutated coronavirus in London could not have been foreseen.

Recommended:
Krivoy Rog iron ore plant bought a powerful loader for the Gvardeyskaya mine
Google employees form their own union in response to layoffs and discrimination
Chinese contractor of new pelletizing plant visited ArcelorMittal Kryvyi Rih
On this topic
Italy is preparing to provide emergency assistance to the steel industry
The British company British Steel began to sell in parts - the Chinese are furious
The deficit in Britain: the Brits are stocking up before Brexit
Tata Steel commented on reports of mass layoffs in Europe
Tata Steel is thinking about mass layoffs in Europe due to the situation in the steel market
Liberty Steel CEO writes letter to Financial Times
Add a comment
Сomments (0)
News Analytics
YUZHMASH expects the adoption of the new space program of Ukraine in the near22-01-2021, 15:18
Eleven miners still await rescue from exploded gold mine in China22-01-2021, 12:34
Rivne NPP shut down power unit No. 122-01-2021, 12:13
Russia will start producing "green" hydrogen22-01-2021, 10:47
High-speed railway launched in China Beijing-Harbin highway22-01-2021, 10:22
China will overtake the United States to become the world's largest economy in27-12-2020, 12:04
The shortage in the US steel market will last at least until the end of the25-12-2020, 11:36
Steel production in China to surpass one billion tons this year23-12-2020, 10:59
Iron ore prices hit seven-year high and continue to rise15-12-2020, 10:26
Prices for metallurgical raw materials continue to rise in regional markets10-12-2020, 11:32
Sign in with: