In total, in 2020, the company will purchase 4 new HL770-9S loaders from the South Korean company Hyundai. 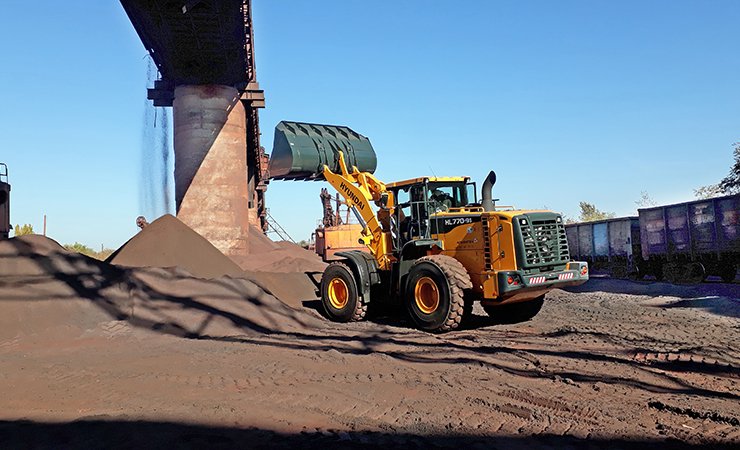 According to the investment program of the Kryvyi Rih Iron Ore Plant, in 2020, the renewal of fixed assets is envisaged, namely the acquisition of 4 Hyundai HL770-9S loaders.

These are front-end single-bucket wheel loaders. They are characterized by an increased operating weight - 22,500 kg, the presence of a more efficient motor (speed up to 38 km /h and power 284 hp (208.08 kW) at 2000 rpm), the use of a bucket with a capacity of 5 cubic meters in the base. This is exactly the volume that allows you to meet the technical conditions for loading ore. This front loader is quite suitable for the enterprise's technologies: preparation, homogenization and loading of ore into gondola cars. The new equipment will operate at the cargo areas of the Ternovskaya, Gvardeyskaya, Oktyabrskaya and Rodina mines. Now it will be operated along with the EKG-5A excavators.

The head of the department, Alexander Britvin, notes that they approached such an important step in advance and prepared the personnel. On the basis of the training center of the combine, courses for loader drivers were organized for excavator drivers, now they have certificates for the right to drive this machine.

Since October 23, the first Hyundai loader has been put into operation, which operates at the ore warehouse of the Gvardeyskaya mine. On this day, with the participation of the UZT administration and workers, a meeting was held with representatives of the company "Alfatech" from the supplier. They told how to use the new equipment and answered all the workers' questions, they will directly operate the machine. In addition, technical training took place, during which each of the workers performed technological operations with their own hands.

Also, courses for several forklift drivers have begun, the completion of which will allow them to go on a public road, that is, they will be able to move from one structural unit to another if necessary. The training will last at DNEPRAGROTECHSERVICE in two stages, since the operation of such a machine requires category E2.

The next two loaders are now undergoing an expert examination, after which they will be registered at the administrative services center in Dnipro, and in the near future the railway workers will be able to operate them at the ore warehouses of the Ternovskaya and Rodina mines. The fourth loader of the Krivoy Rog Iron Ore Plant is expected at the end of the year.

Alexander Semenovich adds that the new technology will improve the working conditions of employees, because it is equipped with a comfortable cab, a durable chassis, has improved thermal insulation, an interior heater, a pre-heater, as well as optional heater systems for the driver's seat and side mirrors. The driver's workplace is characterized by a European level of ergonomics with convenient control access.

Recommended:
Donetsk region of Ukraine lost 422 million foreign exchange earnings due to falling steel exports
Russian government liquidates trade missions in Lithuania and Ukraine
Ukraine can completely replace gas imports and save billions of dollars on it - State Energy Efficiency
On this topic
Zaporizhstal is implementing an investment program: a new loader has arrived at the blast furnace
23 employees of the Oktyabrskaya mine in Kryvyi Rih continue their underground strike
Kryvyi Rih iron ore plant increased the salary of miners by another 10%
The number of striking underground miners of KZHRK increased to 62 people
KZhRK miners' strike threatens with loss of sales markets without prospects of their return
The head of KZHRK ordered preparations for the conservation of all four mines of the enterprise -
Add a comment
Сomments (0)
News Analytics
SE "VostGOK" promises to pay off wage arrears by the end of next week27-11-2020, 22:39
Ukraine is losing leadership in the EU rapeseed import market due to the27-11-2020, 18:50
Italian steel plant - largest in Western Europe - launches blast furnace27-11-2020, 17:00
Tesla will recall more than 10,000 cars with defective roof and steering wheel27-11-2020, 16:13
How much will steel prices in the United States "jump" upwards and what are the27-11-2020, 16:23
European Union scrap collectors worried about possible export restrictions18-11-2020, 10:41
Occupational diseases of workers in the extractive industry: types and ways to16-11-2020, 17:49
Eurofer expects recovery in EU steel demand05-11-2020, 09:47
Hot rolled carbon steel demand will continue to grow by 4% pa until 203004-11-2020, 16:14
Platts Steel Trade Review: China Will Decide Asia's Fate30-10-2020, 10:04
Sign in with: