About 600 people are involved in the rescue operations, 25 ambulances, neurosurgeons, traumatologists and psychologists are on site. 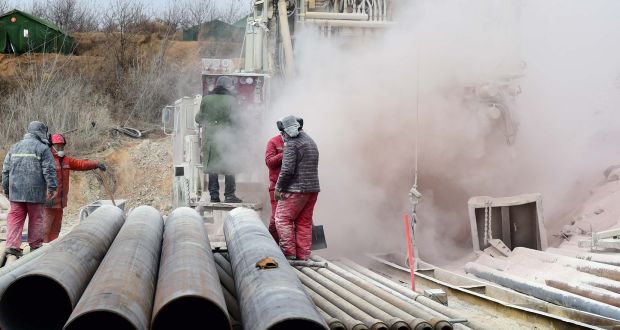 Workers trapped in the Hushan gold mine in Shandong province in China by an explosion since January 10 may wait another 15 days for rescue as the escape route is blocked, local media reported.

A total of 22 workers were trapped underground after an explosion at the Hushan mine in Qixia, a large gold mining region on the northeast coast, according to Reuters. It is confirmed that one has died and 11 are known to be alive. The other 10 are missing.

Previously, the survivors were contacted and food and medicine were sent.

Rescuers hope to use a single 711mm shaft to transport survivors to safety. However, removing the obstacles may take at least another 15 days, Gong Haitao, deputy head of Yantai's propaganda department, said at a press conference at the rescue headquarters.

About 600 people are involved in the rescue operations, 25 ambulances, neurosurgeons, traumatologists and psychologists are on site.

Chinese mines are among the deadliest in the world. According to the National Mine Safety Administration, 573 mine fatalities were reported in 2020.

Recommended:
The English court rejected the claims of the Russian "Tatneft" against Yaroslavsky
Zaporozhye Titanium and Magnesium Combine Demonstrated First Results of Financial Recovery Program
China starts digital transformation of the country's coal industry
On this topic
At least 12 living miners remain under the rubble of a mine blown up on January 10 in China
18 people die after carbon monoxide leak in China coal mine
Rinat Akhmetov's DTEK has launched the underground Wi-Fi connection at a depth of 500 meters
Jihadists undermine the extraction of gold in Burkina Faso attacking mine
Iran plans to capture 20% of the copper market in Turkey
In Luhansk region the miners refused to come to the surface
Add a comment
Сomments (0)
News Analytics
Britain denies loan guarantees for metallurgical holding GFG Alliance01-03-2021, 22:52
Spread between raw materials and high strength alloy steel in Europe increased01-03-2021, 20:21
Metinvest will not announce plans to achieve carbon neutrality yet01-03-2021, 16:19
Zaporizhstal: production results in February 202101-03-2021, 15:24
The largest Texas energy company files for bankruptcy01-03-2021, 12:31
Spread between raw materials and high strength alloy steel in Europe increased01-03-2021, 20:21
Increase in prices is forecasted in the markets of steel raw materials -26-02-2021, 09:25
Troy ounce of gold will drop $ 500 in two years - Fitch25-02-2021, 18:29
Global iron ore production growth to outstrip cumulative production in India23-02-2021, 10:22
Fitch Ratings Warns of “Shocking Impact” on Fossil Fuel Exporters18-02-2021, 14:44
Sign in with: