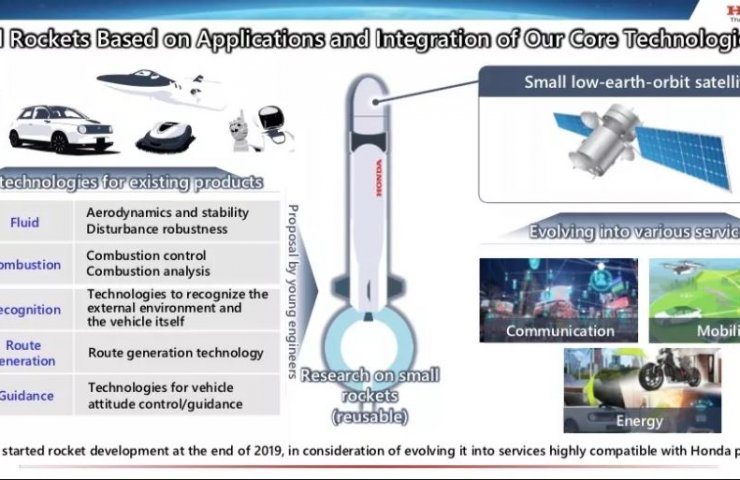 The Japanese automaker recently announced that it is developing a unique reusable rocket. The rocket work is part of the venerable automaker's larger breakout beyond Earth.

Work on the launcher began in late 2019, and Honda already has some serious equipment to showcase: an all-new rocket engine.

Honda and the Japan Aerospace Exploration Agency are also working together to create a "renewable energy circulation system" that could support rovers and human posts on the moon.

Honda showed a short video showing a prototype engine testing. Everything went well. For example, the standing wave pattern, which is a common feature of supersonic exhaust, was clearly visible in the engine plume.

“We believe we have made tremendous progress in this development in just two years,” said Atsushi Ogawa, Chief Operating Officer of Advanced Research Innovation at Honda R&D.

Honda envisions that the rocket will be used to launch payloads weighing up to 1 ton or so. The base plan calls for the launcher to have a reusable first stage, but that could change if analysis shows that 3D printing or other technologies make a one-off option more cost effective, company officials said last week.

Honda hopes to conduct a suborbital test launch sometime this decade, and from there move on to orbital flight. Honda expects to make a final decision on whether to market launches in 2025 or 2026, after assessing the progress made to that point and analyzing the state of the market.

At Honda, we are going to accelerate our space exploration and development, which we see as a place to meet challenges to fulfill the dreams and potential of people around the world using our core technologies, Ogawa said. p>

Финансовая аналитика, прогнозы цен на сталь, железную руду, уголь и другие сырьевые товары. More news and analytics on Metallurgprom telegram channel - subscribe to get up-to-date market information and price forecasts faster than others.
Сomments
Add a comment
Сomments (0)
On this topic
Yuzhmash told whether it is possible to launch reusable rockets from the Black Sea
"New Hidden World" Discovered in Earth's Inner Core
Turkey successfully tests a rocket engine for a flight to the Moon (Video)
The historical path from the Energia-Buran project to the Zenit space rocket complex
Elon Musk has decided to change the grade of steel for plating spaceship Starship
Yuzhmash successfully tested a rocket engine upper stage "Cyclone-4" (Video)
Recommended:
China's shipbuilding industry continues to lead the global market
World steel prices have moved from a protracted fall to growth
Steel prices in the EU continue to fall as the summer holidays begin
News Analytics
India prepares to lift export duties on steel09-08-2022, 08:34
Russian metallurgists will need more than 10 years to replace imports of key09-08-2022, 07:23
China reduced steel exports in July by one million tons or 12%08-08-2022, 17:41
World steel prices have moved from a protracted fall to growth08-08-2022, 16:27
Ferrexpo's net profit in the first half of the year decreased by 88%03-08-2022, 10:20
The US market may begin a collapse in prices for thick sheet14-07-2022, 09:39
High iron ore shortage could halt metallurgy's green transition28-06-2022, 14:02
Price volatility hits global steel market27-06-2022, 19:28
Recovery in China could be key to rising global steel prices - MEPS24-06-2022, 14:00
Conflict in Ukraine spurs Europe's drive for clean energy03-06-2022, 12:14
Sign in with: